Both the London clubs have entered the knockout stage, but the Gunners witnessed Danny Welbeck stretchered down the tunnel with what looked a nasty ankle injury. 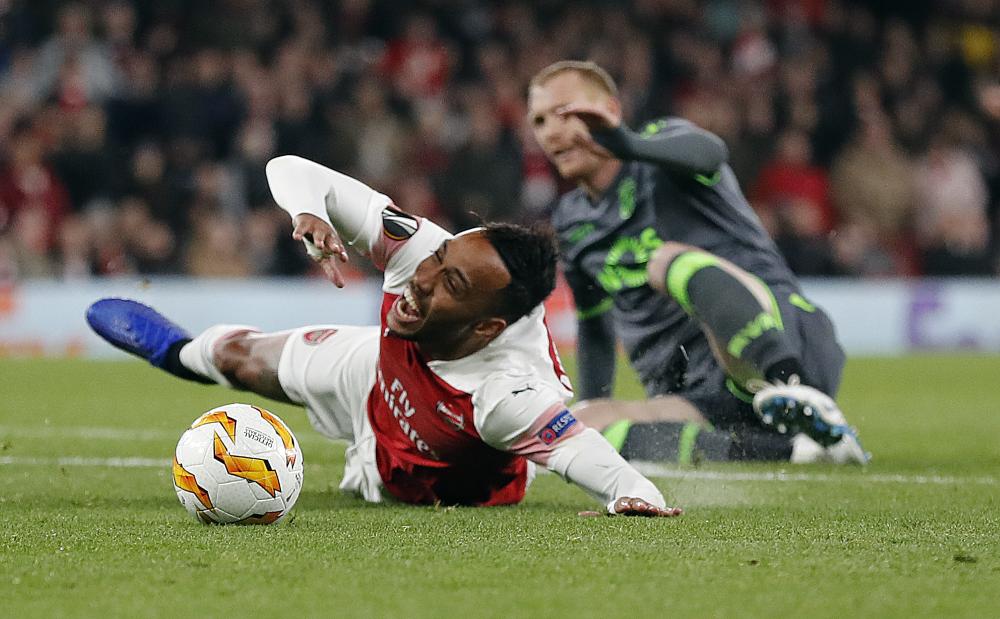 Arsenal's unbeaten run under Unai Emery has extended to 15 matches with a goalless draw with Sporting Lisbon in their UEFA Europa League group match even as former Gunners Olivier Giroud scored for the London rivals Chelsea in another match on Thursday.

The draw helped Arsenal booked a place in the knockout stage and the Blues also eased through the next round with a 1-0 win at BATE Borisov in Belarus. The goal helped Giroud end his 11-game goal drought this season.

But Arsenal striker Danny Welbeck, given a rare start just hours after being named in Gareth Southgate's England squad, had to be stretchered down the tunnel with what looked a nasty ankle injury in the first half.

Arsenal midfielders Matteo Guendouzi and Aaron Ramsey were both visibly upset after Welbeck, who is out of contract at the end of the campaign, went down after jumping to win a header.

"It is mentally challenging (playing after a teammate is injured) but sometimes it comes with the game, and Danny has had a lot of injuries," winger Alex Iwobi told BT Sport.

"We wish him the best and will keep on encouraging and motivating him to get back."

Gunners were the better side for long periods at the Emirates against a team who have already had three different managers this term, but were forced to settle for a point despite Sporting being reduced to 10 men late on when former Barcelona centre-back Jeremy Mathieu was sent off.

But Arsenal did secure a last-32 spot regardless, as Vorskla Poltava lost 1-0 at home to Azeri outfit Qarabag in the other Group E game.

Chelsea made it four wins from four matches in Group L by edging out a spirited BATE Borisov 1-0 in Belarus.

Giroud ended his 11-game goal drought this season by giving Chelsea a 53rd-minute lead, and the Premier League giants held on despite BATE striking the woodwork three times in the match.

"I was hoping to score soon because I came back late from the World Cup and I was lacking maybe a bit of efficiency and luck but you always need to keep working hard and keep the faith and that's what happened tonight," France striker Giroud told BT Sport.

The Londoners moved six points clear of Hungarians Vidi at the top of the group and have not tasted defeat in 17 matches since losing the Community Shield to Manchester City in August.

Steven Gerrard's Rangers saw their 11-game unbeaten run in this year's Europa League come to a dramatic end as they threw away the lead three times in a 4-3 defeat at Spartak Moscow.

Both sides were the beneficiaries of comical own goals in a crazy first half which ended with Glenn Middleton putting the Scots 3-2 ahead, but Luiz Adriano and Sofiane Hanni both scored in the space of 71 seconds to snatch Spartak victory.

Rangers are now level on points with Spartak in an incredibly tight Group G, one point behind leaders Villarreal after the Spaniards' goalless draw with Rapid Vienna in Austria.

"For me, football is about levels and, if you don't defend properly and you don't do the basics well enough, high-level players and high-level teams normally punish you and that was the case tonight," Gerrard told the Rangers website.

Reigning Scottish champions Celtic gave themselves a lifeline in Group B, as Odsonne Edouard's 79th-minute strike saw them beat RB Leipzig 2-1 in their must-win clash at Parkhead.

Salzburg, semi-finalists last season, qualified for the next round with a 5-2 thrashing of Rosenborg in the group's other match, as Japanese forward Takumi Minamino scored a hat-trick.

Elsewhere, Eintracht Frankfurt reached the last 32 with their fourth win from as many group games by beating Apollon Limassol 3-2 in Cyprus, while Lazio joined them in progressing from Group H as goals from Marco Parolo and Joaquin Correa secured a 2-1 win over Marseille to eliminate last season's runners-up.

Record five-time winners Sevilla needed a late penalty from Ever Banega to claim a 3-2 victory at Akhisar Belediyespor, after having a man sent off, losing a two-goal lead and seeing the Turks miss a spot-kick of their own.