As the year 2021 is about to end, Bollywood actress Shilpa Shetty pens down an emotive note for the year 2021and is all set for welcoming the new year. Have a look.

Bollywood actress Shilpa Shetty took to her Instagram stories to express her heartfelt emotions for the year 2021.  Shetty has reflected on this year and wrote, "Dear 2021, You were a mixed bag of emotions for all of us. There were smiles, tears, laughter, hugs, goodbyes, and a lot more."

"But, we sailed through. With a prayer for a better tomorrow, it's time to bid adieu to you. We're ready for you, 2022! Please be nice (smiling emoji) Happy New Year's Eve!" 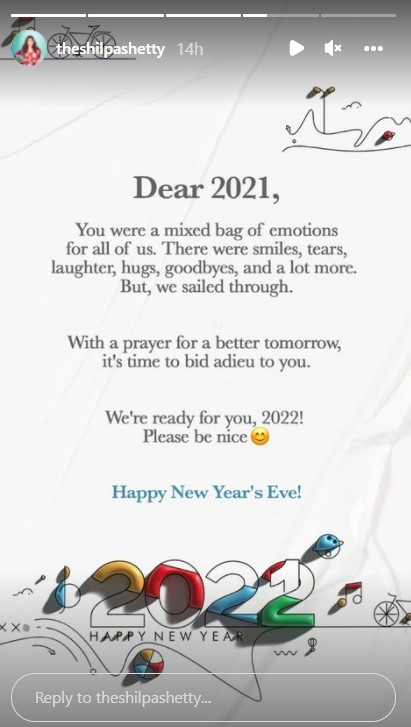 Shilpa's husband and businessman Raj Kundra was arrested earlier this year on charges of allegedly making pornographic films. Kundra was granted bail in the case by a Mumbai court in September on a Rs. 50,000 surety.  Kundra has maintained a low public profile since then. Kundra's arrest occurred just days before the release of Shilpa Shetty's film 'Hungama 2', which marks her return to acting after a long hiatus.

Kundra had travelled to Himachal Pradesh with Shetty after his release, when they were seen visiting a temple together to seek blessings. The couple recently travelled to Mussourie with their children, Viaan and Samisha, to enjoy Christmas in the highlands. They have returned to Mumbai.

The actress also shared her preparations  New Year's Eve by posting an Instagram story. Have a look. 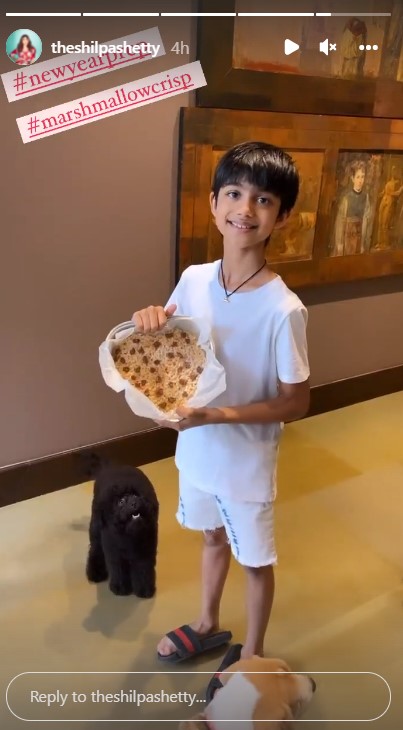 Shetty's son, Viaan can be seen holding a bowl of deliciously made marshmellow crisps to kick start the new year eve and binge on the delicious delicacy.