It was past midnight Indian Standard Time. I was in bed wide awake and hugging on to my transistor radio and listening to the live transmission of the landing broadcast by the Voice of America... 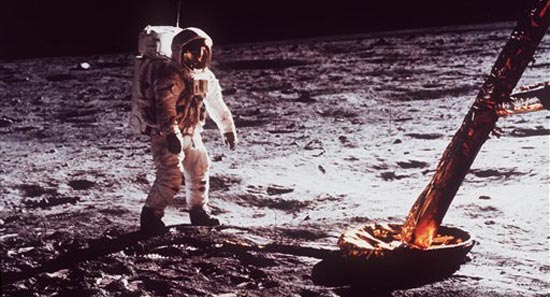 I counted with Neil Armstrong as the lunar module approached the surface of the moon for the historic moon landing 40 years ago.

It was past midnight Indian Standard Time. I was in bed wide awake and hugging on to my transistor radio and listening to the live transmission of the landing broadcast by the Voice of America.

I had no TV set. Even if I had, it would not have been useful. There was no live telecast.

And then came the most exciting (for us on earth) words.

One would have expected total excitement on board the lunar module. Nothing. Not even one Hooray.

Neil Armstrong and Buzz Aldrin started reading out from the instruments on board so that the ground controllers could satisfy themselves that everything on board was all right.

The ground controllers then asked the two astronauts to go to sleep.

Imagine! They had landed on the moon.

The first human beings to do so.

Had I been there, I would have immediately opened the door and rushed out of the module to explore the moon.

But not Neil and Buzz.

They just went to sleep as ordered by the ground control, which, from the ground, monitored the various instruments on board as the two were sleeping--as if they were sleeping on their bed at home and not inside a module on the lunar surface.

The live broadcast from the module stopped. The VOA started broadcasting interviews with ground controllers, members of the families of the astronauts and others.

I also went to sleep after switching off the radio.

But after every hour or so, I would wake up and switch it on to see whether live transmissions from the lunar surface had resumed.

They had not. Neil and Buzz were still sleeping. 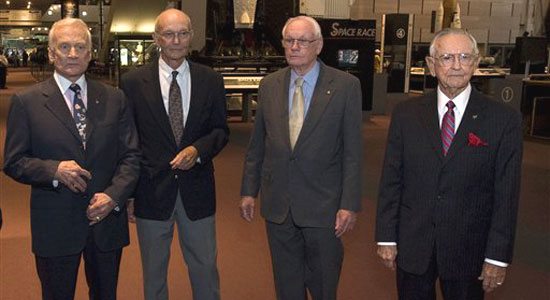 And then, after a few hours, when I switched on the radio, I could again hear the voices of Neil and Buzz chatting with the ground controllers.

Once again they were reading out from the various instruments.

Those in New Delhi, who had TV sets, were able to see the pictures some hours later. There was no live TV transmission.

What fears I had!

Supposing they are struck by a meteorite!

Supposing they are killed by living beings on the moon of which we were not aware!

Supposing something goes wrong with the module and they are stranded to die on the moon!

Oh God! I remember those fears even today.

And then to my relief, they returned to the module. They closed the door.

Reading out of the instruments again.

The command went from the ground to take off. They did.

The lunar module was space borne again and started moving towards the mother ship through a series of complex manoeuvres.

Mike Collins was piloting the mother ship which kept orbiting the moon as Neil and Buzz were on the surface of the moon.

The rendezvous between the mother ship and the lunar surface was a very complex manoeuvre for all the three. It required piloting skills of the highest order from all the three.

The lunar module had to reach the same orbit as the mother ship and then slowly approach it and dock.

The actual docking took place when the mother ship and the lunar module were on the far side of the moon when all communications with the ground stop.

Total silence for about 30 minutes.

Nobody knew what was happening on the other side of the moon.

Were the docking manoeuvres successful? Have Neil and Buzz transferred themselves and their cargo of moon rocks to the mother ship?

We did not know.

We had no way of knowing till the communications resumed after the orbit of the mother ship brought it to the near side of the moon.

The VOA went back to its interviews and descriptive stories.

We heard the voices of the astronauts again.

Reading out from their instruments and preparing themselves for the return journey to earth.

It was a great achievement. That day we were all Americans. The whole world was America.

As we celebrate the 40th anniversary of the first moon landing and hail once again the astronauts who participated in the moon mission, let us not forget the scientists, the engineers and other technicians on the ground who made the moon mission possible.

Their achievement was as great as that of the astronauts.

To imagine they achieved all this 40 years ago when technology was not as advanced as it is today!