'Do Not Underestimate Us'

'The common thing between the 1987 and 1999 teams and the present outfit is the spirit, determination, commitment and ambition to do well in India. My team has a lion's heart and that's what you require to excel.' 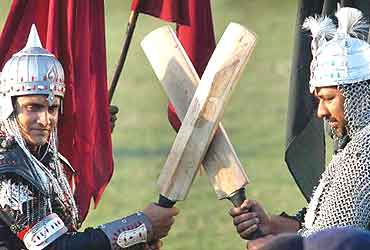 Pakistan captain Inzamam-ul Haq warned India not to underestimate his young and inexperienced team, declaring that it had the determination and ambition to do well in the upcoming "mother of all" series.

Although his team lacked the superstars of the 1987 and 1999 teams, Inzamam said what was common in the present squad and the previous match-winning sides was the commitment to do well in India.

"I hope India do not underestimate us on the basis that we have an inexperienced and young team as compared to it (India) or because we don't have same superstars or match-winners as we had on the 1987 and 1999 tours," Inzamam said in an interview shortly before leaving for India for a commercial shoot, also featuring his rival Saurav Ganguly.

"The common thing between the 1987 and 1999 teams and the present team is the spirit, determination, commitment and ambition to do well in India."

Pakistan, under Imran Khan, won the 1986-87 five-Test series 1-0 with victory in the Bangalore Test whereas in 1999, Wasim Akram guided Pakistan to victories in Chennai and Kolkata. Anil Kumble's world record of 10 wickets in the second innings helped India win the Delhi Test.

The survivors from the 1999 tour are likely to be Inzamam himself, Shoaib Akhtar, Yousuf Youhana and Shahid Afridi.

"My team has a lion's heart and that's what you require to excel in countries like India. We have also managed to find some positives in defeats in Australia which will help us," said Inzamam.

The Pakistani skipper, who has played just five Tests against India, said he would like to gain from the experience of the members of the 1987 team before planning strategies for the tour comprising three Tests and five one-dayers.

"I was a member of the 1999 touring party so I know what it was like. But I would like to gather any information I can from members of the 1987 team because it can be useful in chalking out game plans and strategy," Inzamam, who will complete his century of Tests in the third Test, stated.

Last year against India in Pakistan, Inzamam's team suffered a 2-1 defeat in Tests and 3-2 defeat in the one-day series. But the skipper insisted his players had matured since.

"The boys now have played half a dozen more Tests and nearly 25 additional one-day games which will certainly help them put up an improved performance. I know these are not sufficient when you compare them with India but the statistics are certainly lot better than last year.

"Victories in the last three one-dayers, including the one at Kolkata, is something that will motivate us further. You have to take inspiration from victories and learn lessons from defeat," the affable player said.

"I have not forgotten that defeat. It's still fresh in my mind. But I am not going there to take revenge. It's just a game of cricket. India won fair and square last year because they were clearly the better side.

"Our only revenge can be if we play as good cricket as India played in Pakistan. Winning and losing is part of the game. When two teams will meet, there will be just one winner. The bottom line is the spirit in which you play and I promise that we will play the game in the right spirit, will approach every game positively and take the field convinced that we can win it."

Inzamam, who has scored 7,052 Test and 10,631 one-day international runs, added, "My request to supporters of both the teams is not make this series a matter of life and death."

'A Giant In His Own Right'