The former JD (U) leader had on Thursday stoked a controversy after he called the Rajasthan chief minister “fat”, while appealing to voters in the poll-bound state to not vote for BJP. 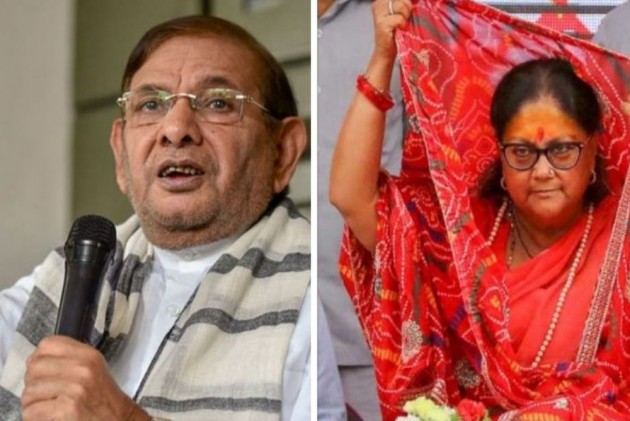 A day after Vasundhara Raje urged the Election Commission to take action against Sharad Yadav for body shaming her during an election rally in Alwar, the senior Bihar politician on Saturday said he will apologise to the Rajasthan chief minister.

"Yes, I have seen her statement. I have family relations with her. If my words have hurt her, I express regret. I will also write a letter to her expressing my regret," he told the media.

Earlier, Yadav tried to downplay the controversy, terming it as humour. "I said it as a joke. I've old relations with her. It wasn't derogatory in any way. I had no intentions of hurting her. When I met her, I told her then also that you're gaining weight," he told news agency ANI.

Yadav, a former JD(U) Rajya Sabha member, while campaigning for Loktantrik Janata Dal in Alwar in Rajasthan on Wednesday, had called Raje fat and asked people to give her rest.

After criticism from various quarters, Yadav had said it was a joke and that he had no intention of hurting Raje and it was not meant to be derogatory in any way.

Reacting to his remarks, Raje had said, "I feel insulted. This is insult of women". The BJP leader said she was "absolutely shocked" and did not expect such a comment from an experienced leader.

It is important that the Election Commission takes cognisance of this and sets an example so people don't repeat such a thing in future, she had added.

A video of Yadav was circulated on social media with many labelling his comments crass and misogynistic.

CPI(M) leader Brinda Karat had echoed Raje's call for an apology from Yadav.

"A senior leader like Sharad Yadav making such a derogatory comment on a woman leader, who is also a chief minister, is extremely objectionable. He should withdraw his statement and offer an apology," she had said.

To queries on Prasad's health, he said that the former Bihar chief minister was much better now.

Yadav also condemned the Bulandshahr violence in which a police inspector and a youth were killed.

"In the last four and a half years, not a single promise (made by the BJP) has been fulfilled like the promise of giving jobs to 2 crore youths in a year.

"The 25 parties that have come together will ensure the exit of the present government in 2019," he added.

Asked what transpired between him and Lalu Prasad, he said they discussed political issues, "but that cannot be made public".