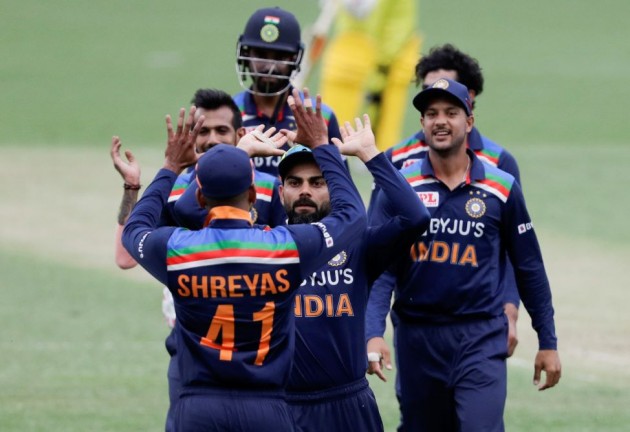 Left chasing shadows in the first two games, a listless Indian team would most certainly tweak its bowling combination in order to avoid a second successive clean-sweep when it takes on Australia in the third and final ODI here on Wednesday. (More Ind-Aus News)

A 0-3 defeat against Australia would be their second rout in consecutive ODI series having met the same fate in New Zealand earlier this year.

The first two games turned out to be run-fests in which Australia out-batted Virat Kohli's men and before they switch over to the T20 series, a win at the picturesque Manuka Oval could do their confidence a world of good.

Skipper Kohli has been the first to admit that they have been "outplayed" in the two games and it is expected that some corrective measures will be taken in order to get their campaign back on track.

Navdeep Saini, India's fastest bowler, like a lot of others on his first tour of Australia, has looked clueless.

Such has been his plight that Kohli was forced to bowl a half-fit (bowling wise) Hardik Pandya and even Mayanak Agarwal to complete Saini's spell after he gave away 70 runs in seven overs.

It could well be possible that one among Shardul Thakur, with an experience of 27 international games, or the 'yorker sensation' rookie left-armer Thangarasu Natarajan will be seen replacing Saini.

In case of Natarajan, it could be his international debut and a chance to test himself in an inconsequential game before the start of the T20 series where he is sure to play a part.

It could well be a case of both Shardul and Natarajan being given a go in case Kohli decides to rest both Jasprit Bumrah and Mohammed Shami, who need to remain fit and fresh for the big-ticket Test series.

Natarajan, with his clever variations and change of pace, could provide a different dimension, as the cutters might work well and a bit of swing may be on offer on a ground which is not exactly a closed concrete jungle and may aid a bit of swing.

Never had an Indian attack looked so out of sorts as it did in the two games -- hit for 69 boundaries and 19 sixes.

Kohli said that switching of formats from T20 to ODIs can't be an excuse for a team whose core has remained pretty much the same for a considerable period of time.

The bowlers have had no idea where to bowl to Steve Smith, who has decided to single-handedly torment the opposition with back-to-back 62-ball-hundreds.

Add to it, Glenn Maxwell's power-packed finishing at the end of the innings is giving them those extra 30 runs which are creating the difference from India's perspective as the margin of defeats of 66 and 51 respectively would suggest.

The Indian captain's hasty bowling changes, including a two-over opening spell to his main bowler Bumrah, had invited criticism from one of his staunchest critics Gautam Gambhir as well as Ashish Nehra.

If the pacers have had their share of woes, the spinners have only compounded worries with their inept performances.

Yuzvendra Chahal has been the most expensive bowler in the first two games with 160 runs conceded in 19 overs and just one wicket to show for his efforts.

Ravindra Jadeja, on the other hand, has looked flat despite a decent economy rate of 6.15. The result, wicketless in both games.

Still, India can take solace from the fact that in both matches, the batting looked the part and maybe, a target of 335 to 340 could have been chased on both occasions.
Match Starts: 9:10 am IST.