On March 12, the High Court here granted the chairperson of the Bangladesh Nationalist Party (BNP) a four-month interim bail. 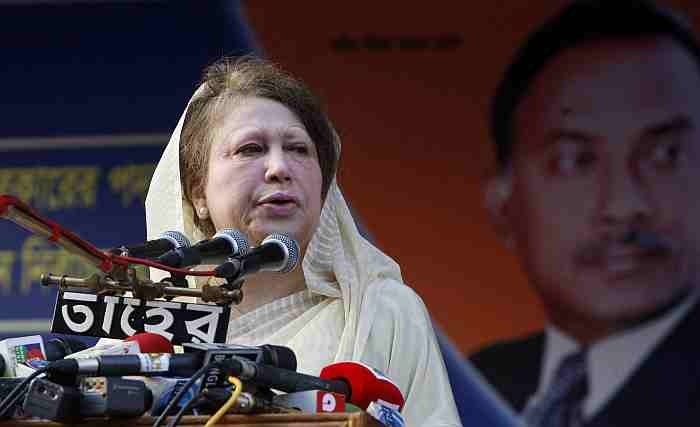 Bangladesh's Supreme Court today stayed the release of former prime minister Khaleda Zia on bail in a corruption case under which she was sentenced to five years imprisonment, in a setback to her political ambitions in this year's general election.

Zia, 72, was sentenced on February 8 in connection with the embezzlement of 21 million taka (about USD 250,000) in foreign donations meant for the Zia Orphanage Trust, named after her late husband Ziaur Rahman, a military ruler-turned-politician.

In the same case, her son Tarique Rahman and four others were sentenced to 10 years in jail.

However, today a full bench of the Appellate Division led by Chief Justice Syed Mahmud Hossain passed the order to stay until May 8 the High Court order which granted bail to Zia in the graft case.

Following today's Supreme Court order, Zia will not be released from jail till May 8, Anti-Corruption Commission (ACC) lawyer Advocate Khurshid Alam Khan was quoted as saying by Daily Star.

The apex court asked the ACC and government to submit concise statements on the appeal in two weeks after receiving the leave granting order, the report said.

After passing the order, Hossain said all the four judges of the apex court passed the order unanimously after examining the records of the case.

Zia's lawyer said that it is unprecedented that the Supreme Court did not assign any reason for granting leave-to-appeal petition filed by the ACC and government against the High Court order of bail to his client.

Earlier on March 15, the ACC and the state filed two leave-to-appeal petitions before the Appellate Division of the Supreme Court, challenging the BNP chief's bail.

The ex-premier on November 30, 2014 lost her last ditch effort to evade the graft trial as the Supreme Court turned down her second 'leave to appeal' petition challenging her indictment and asked her to face trial in the lower court

The High Court earlier validated the trial in the lower court which on March 19, 2014 had indicted Zia on two graft charges brought by the ACC.

The ACC alleged that the two charities, the other being the Zia Charitable Trust, existed only on paper and a huge amount of money was misappropriated in the name of the two organisations while Zia was premier during the BNP's 2001-2006 government.