The Supreme Court observed that "dissent is the safety valve of democracy and if dissent is not allowed then the pressure cooker may burst." 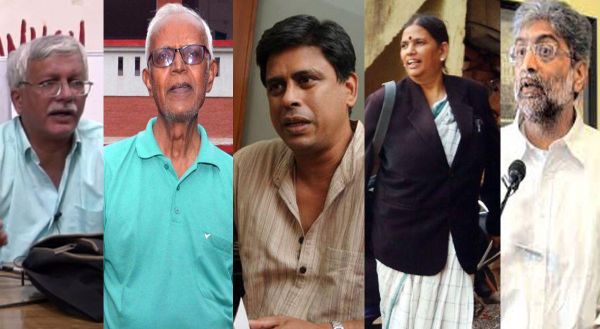 The Maharashtra police's move to arrest five well known activists was punctured on Wednesday with the Supreme Court observing that "dissent is the safety valve of democracy" and directing that those in its custody be kept under house arrest.

The five human rights activists -- Varavara Rao, Vernon Gonzalves, Arun Ferreira, Sudha Bharadwaj and Gautam Navlakha -- who were arrested after the pan India crackdown on Tuesday will not be sent to jail but be under house arrest under police watch until September 6, the court ruled.

"Dissent is the safety valve of democracy and if you don't allow these safety valves it will burst," a bench headed by Chief Justice Dipak Misra and comprising Justices A M Khanwilkar and D Y Chandrachud said.

Dealing a blow to the Maharashtra police, the apex court questioned it for arresting the activists nine months after the violence between Dalits and upper caste Peshwas in Koregaon-Bhima village near Pune following the Elgar Parishad, or conclave, on December 31 last year.

Provocative speeches were made at the Elgar Parishad, which triggered the violence, according to an FIR registered in a Pune police station.

The apex court also issued notice to the Maharashtra government and the state police on the plea by five leading intellectuals, including historian Romila Thapar and economists Prabhat Patnaik and Devaki Jain, against the arrests in connection with the case.

"The Supreme Court order has passed an order that covers all who were arrested," said lawyer Vrinda Grover after the ruling.

She added that they would be taken back to their homes.

While trade unionist and lawyer Bharadwaj is confined to her home in Faridabad and civil liberties activist Navlakha to his Delhi residence, Telugu poet Rao and activists Gonsalves and Ferreira were taken to Pune late on Tuesday night.

They were arrested for their suspected links to Maoists following near simultaneous searches at Rao's home in Hyderabad, Gonzalves' and Ferreira's residences in Mumbai as well as in Faridabad and Delhi, officials said.

They were arrested under IPC Section 153 (A), which relates to promoting enmity between different groups on grounds of religion, race, place or birth, residence, language and committing acts prejudicial to maintenance of harmony.

Some other sections of the IPC were also pressed, along with the Unlawful Activities (Prevention) Act, for their "alleged naxal activities", an official said, without elaborating.

As activists and others breathed a little easier following the apex court ruling, the Delhi High Court, which was hearing Navlakha's plea, observed that even if all other arrests were found to be valid, it would not lend validity to his arrest.

The National Human Rights Commission also stepped into the controversy, saying "it appears" standard operating procedure was not properly followed and this may amount to a violation of the human rights of those arrested.

It issued notices to the Maharashtra government and the state's police chief and asked for a 'factual report' within four weeks.

As the courts gave their ruling in Delhi, police in Pune \Rsaid it had "evidence" suggesting a plan to target the "highest political functionaries".

Joint Commissioner of Pune Police Shivajirao Bodkhe also claimed to have evidence to suggest that the arrested people had links with Kashmiri separatists. The Elgar Parishad, he told reporters, was funded by the Maoists.

Earlier in the day, Maharashtra Minister of State for Home Deepak Kesarkar said all procedures were followed before conducting the raids against the activists."It is due to their links with naxal movements that they have been arrested. If there was no evidence, we would not have taken the action," he said.

The others whose premises were reportedly searched were Father Stan Swamy, Susan Abraham, Kranthi Tekula and Anand Teltumbde.

"The entire case is a political ploy against political dissent by this vindictive and cowardly government...," Navlakha said in a statement issued by civil rights group People's Union for Democratic Rights of which he is a part.

Navlakha's transit remand was secured from the Saket district court to take him to Pune. The order, however, was stayed by the high court.

It was a night of dramatic developments for those following Bharadwaj's case.

The chief judicial magistrate of Faridabad had granted Bharadwaj's transit remand to the Maharashtra police. However, it had to reverse its order in the early hours of Wednesday in keeping with the directions of the Punjab and Haryana High Court that had stayed her transit remand for three days.

Koregaon-Bhima occupies a central place in Dalit history -- it witnessed a major battle in which the Peshwa rulers were defeated on January 1, 1818 by the British army, comprising a large number of Dalit soldiers. Every year, the anniversary of the battle is marked by Dalits assembling in Pune and marching to the Koregaon-Bhima war memorial.

Wednesday's events mirrored raids conducted in June when five activists were arrested in connection with the Koregaon-Bhima violence.