The police in Dhaka detained Alam on the night of August 5 and he was remanded to police custody for a week on charges of ‘spreading propaganda and false information against the government’. 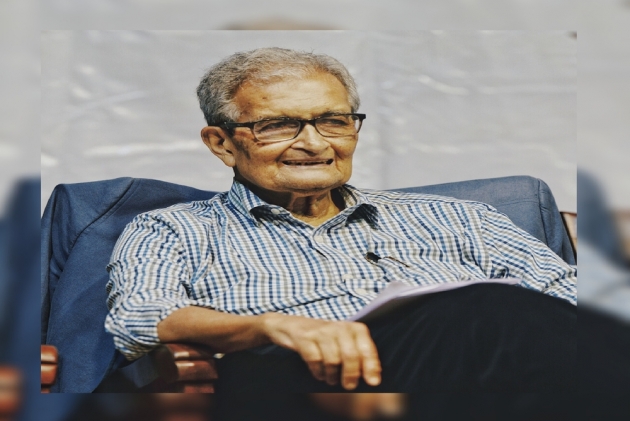 Nobel laureate Amartya Sen has issued a statement in support of veteran Bangladeshi photographer and photography instructor Shahidul Alam, who is in custody ofauthorities of Bangladesh. A number of global media houses and organisations have raised their voice against the muzzling of speech in Bangladesh.

Sen is among global intellectuals who have voiced support for the Bangladeshi dissenter, which includes Noam Chomsky, Arundhati Roy, PEN International, several photography associations and press bodies, including RSF and the Committee to Protect Journalists.

"Freedom of expression, including through photojournalism, is extremely important for democracy.  We have good reason to admire the work that Shahidul Alam has been doing with great skill and courage for many years.  His work should receive praise and appreciation, rather than being ground for harsh treatment,” Sen told a group of Indian photographers who are running a campaign in support of Alam.

The police in Dhaka detained Alam on the night of August 5 and he was remanded to police custody for a week on charges of ‘spreading propaganda and false information against the government’.

A magisterial court in Dhaka remanded Alam to judicial custody since August 12. Alam’s wife and well-wishers visited him in Keraniganj Central Jail on August 22, following which he was shifted to a hospital in the prison. In a statement, the visitors noted that Alam had breathing difficulties, a pain in his jaw and gums and complained of an ailment in his eyes. They have urged that Alam be shifted to a proper hospital for treatment till the next date of hearing, which is September 11, till when Alam will have to stay in prison.

Alam is a photographer who has contributed widely to media houses across the world. He is an honorary fellow of the Royal Photographic Society and has been a member of the advisory board of the National Geographic Society. He is also credited with founding the Drik Picture Library in Dhaka and the Pathshala South Asian Media Institute amongst other achievements.

Alam’s arrest on August 5 came shortly after an interview  to the global English news station Al Jazeera. In it, he had given a larger context to an ongoing protest by students in Bangladesh, sparked off by road safety concerns following the killing of two teenagers by a public bus. The protests later turned violent after a brutal crackdown by the police in which both the students and media persons were hurt during by the riot-control police.

The 63-year-old dissenter had blamed the current Bangladesh regime for extrajudicial killings, disappearances of dissenters, corruption, media gags, rigged quotas in public employment and brutal crackdowns against dissent amongst others. Alam had said that the police had baton-charged the student protestors and used tear-gas shells and fired rubber pellets at them while supporters and ‘armed goons’ of the ruling Awami League were allowed to roam free.

The mood in Bangladesh has changed due to the onset of elections and Alam said that the ruling regime was using all means possible to quash any form of dissent to create an environment of fear before the polls. “They are clinging on, using the entire might of the system plus the armed goons at their disposal,” Alam had told Al Jazeera.

That night, Alam was whisked away by around 30 policemen. Alam’s family has complained  of ill-treatment during his prolonged custody.

The attorney general of Bangladesh, Ma hboobe Alam, has accused  Shahidul Alam of trying to instigate anti-establishment opinion through Facebook. Shahidul Alam had been charged under section 57 of Bangladesh’s Information and Communication Technology Act. There are similarities to Section 66A of the Indian Information Technology Act, which was decided as unconstitutional by the Supreme Court of India in March 2015.

Several global media houses have written in support of the noted photographer though Alam’s incarceration has been missing from major Indian publications. This includes an editorial by the Guardian which has urged the British and other governments to urge for a legal reform in Bangladesh and inquire into the allegations of custodial ill-treatment. “Charging such a high-profile figure is surely intended to have a chilling effect. To defend Mr Alam is to defend the right of journalists, and citizens in general, to speak out in Bangladesh”, the editorial says.

Mumbai-based writer, Skye Arundhati Thomas, has noted that Alam is one of many Bangladeshi bloggers, journalists, writers and others have been detained under the ICT Act for merely liking and sharing Facebook posts which shows that “the subcontinent faces a severe crisis of freedom of speech”.

Gayatri Chakravarty Spivak, a leading scholar and professor at Columbia University, noted in the The New York Times that a campaign of misinformation is being spun around Alam’s incarceration to influence the judiciary. This included questionable social media posts by, Shajib Wazid Joy,  the son of Bangladesh prime minister, Sheikh Hasina.

The Times has published a personal piece by its arts correspondent, David Sanders, who is married to Alam’s niece. In it, Sanders wrote, “Choosing photography and journalism as his mediums Shahidul wrangled change. He brought email to Bangladesh, set up South Asia’s foremost photography school and won the country’s highest cultural prize, while championing its dispossessed.” 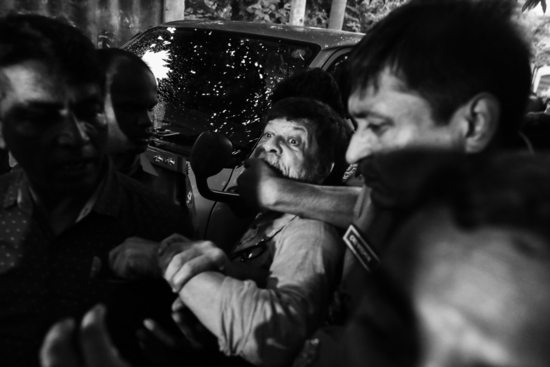 The situation in Bangladesh is tense at the moment that the accompanying photograph (of Alam being muzzled) was clicked by someone who wishes to remain anonymous to avoid detection due to fear of detention. It has been sourced through a Kolkata-based photographer who is part of a social media campaign around Alam’s release.