'I will give much of the credit for India's victory to the three youngsters - Gagan Ajit, Deepak and Prabhjot. They raised their game by a few notches in the crucial match' 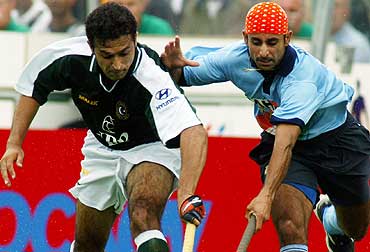 The Indian hockey team showed great mental strength to come back from the pits to swamp arch rivals Pakistan in their last league match of the Champions Trophy.

After struggling in their earlier matches, the team finally played to its full potential to salvage some pride. No doubt, Dhanraj Pillay and his men must have been under enormous pressure to get their acts together.

There is always a lot of pressure when we play Pakistan, but the Indians responded magnificently to the challenge to record their biggest win against their traditional rivals.

It was an amazing display and very few fans would have expected such a result from a team which looked totally off colour in earlier matches.

It was the Asian style 'open hockey' which resulted in the deluge of goals. The Pakistanis must have thought that the morale of the Indian team would be low. But the Indians proved them wrong. Why they could not play such a game from the beginning of the tournament puzzles me.

The Indians could not play to a strategy in their earlier matches. It becomes all the more difficult when the team has to play six matches, including the positional match, in nine days since it requires adapting to different strategies for different teams. I think this is where the Indians failed.

Fortunately, the Indians played the last match against Pakistan who have a similar style of play. Since the Pakistanis also play an open game, the Indian forwards could take advantage. The same forwards were not given too much room by their opponents which affected their performance in the earlier matches.

The forwards Deepak Thakur and Prabhjot Singh, a trifle inconsistent in the first four contests, had an outstanding day as they troubled the Pakistan defenders from the wings.

It was also heartening to see captain Pillay and veteran Baljit Singh Dhillon at their best as link men. Their passes in upfront to Gagan Ajit Singh, Deepak and Prabhjot were well-timed and these three talented youngsters proved to be a thorn in the Pakistani defence.

With the forwardline firing on all cylinders, the mid-fielders, who were struggling to find their bearing, also appeared far more confident in defending and also the ball position between them was very authorative.

Trailing by three goals at the interval, the man who led the gallant Indian fightback was Jugraj Singh. His two penalty corner conversions were a great effort considering the situation of the match. Not only did he score two goals, he was brave enough to defend the powerful penalty corner push by Sohail Abbas. That was the turning point of the match.

I will give much of the credit for India's victory to the three youngsters Gagan Ajit, Deepak and Prabhjot who really raised their game by a few notches in the crucial match. These three forwards laid passes among themselves and created openings in the striking 'D' and also converted them into goals.

The scoring abilities of these players must have taken their rivals by surprise, particularly the brilliant reverse hit goals by Gagan Ajit. The two goals would be remembered by hockey lovers for a long time.

I have seen Gagan Ajit training for hours perfecting the reverse hit. I am glad that all his efforts paid dividend in a high voltage match against Pakistan. He will be celebrating the victory and also the Arjuna Award.

With this victory, India can still think of playing Pakistan once again for the bronze medal play off. But that will depend on the result of the Australia-Argentina match.

The Indian team cannot be written off so easily as they have proved with their display against Pakistan. But they have to play at this level more consistently in the future to be able to make an impact in important tournaments.

India Rally To Shut Out Pakistan