If you think black penguins are a treat for the eyes, you would definitely love this rare penguin who ditched the usual black tuxedo for a yellow one! 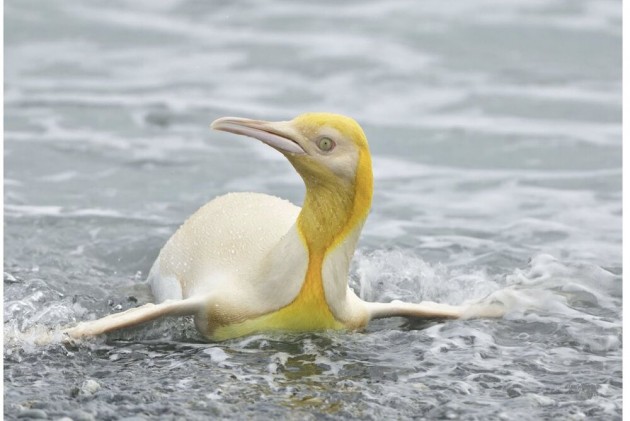 On his trip to an island in South Georgia in 2019, photographer wildlife photographer Yves Adams spotted a yellow penguin. Recently he released the photographs he took of the magnificent penguin and the internet is in love!

According to reports, the yellow king penguin is believed to be one of his kind, the first yellow-and-white king penguin ever found. When Adams went to the rare animal's island home to photograph a colony of 120,000 king penguins, he immediately spotted him.

Somebody sent me these pictures to my WhatsApp and I really don’t know who is the author. But how fascinating is this bird? ðÂÂ±ðÂÂ±ðÂÂ± pic.twitter.com/hUgjfuhpZT

— A Book of Rather Strange Animals (@StrangeAnimaIs) February 18, 2021

"They all looked normal except for this one. It really was something else. It was an incredibly unique experience", expressed Yves. Luck played a great role in the ability to capture such beautiful pictures, he added. "We were so lucky the bird landed right where we were. Our view wasn't blocked by a sea of massive animals. Normally it's almost impossible to move on this beach because of them all".

Adams further explained that the bird is likely to be leucistic, a condition that affects its pigmentation causing the usual black feathers to look yellow.  "I took thousands of photos during that time, especially as the time of year meant it never went dark in the Antarctic", said Yves as he told how it took him over a year to release these pictures because of the demands of his expedition.