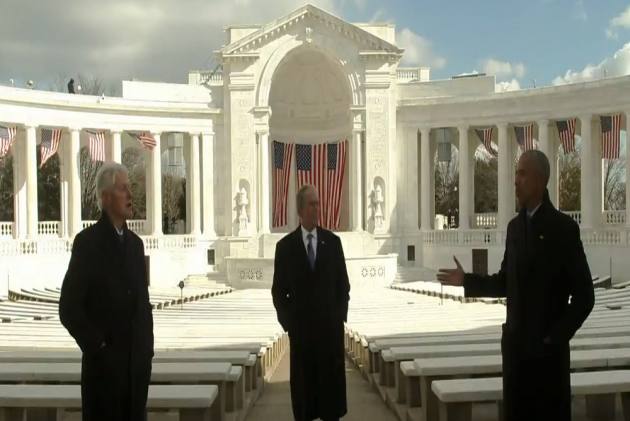 Former US presidents Bill Clinton, George W Bush and Barack Obama shared a joint message of unity on Wednesday night in honour of Joe Biden's inauguration ceremony. In the rare video, the three sent their best wishes to President Biden and hoped his administration would lead the country in facing challenges.

The three former commanders-in-chief can be seen standing in the amphitheatre at Arlington National Cemetery in Virginia. They talk about a peaceful transition of power and the importance of US's Inauguration Day to them.

WATCH: Former Presidents Clinton, Bush and Obama reflect on what Inauguration Day means to them. pic.twitter.com/OtNDf7uF34

“Good evening America, obviously there is a personal element to see my former vice president become the 46th president and to see Kamala Harris as our first woman vice president.

"Inaugurations signal a tradition of a peaceful transfer of power that is over two centuries old," Obama, 59, said.

Bush, 74, said, "The fact that the three of us are standing here talking about a peaceful transfer of power speaks to the institutional integrity of our country. America's a generous country, people of great hearts. All three of us were lucky to be the president of this country”.

“This is an unusual thing. We are both trying to come back to normalcy, deal with totally abnormal challenges and do what we do best, which is trying to make a more perfect union. It’s an exciting time,” Clinton, 74, America’s 42nd president from 1993 to 2001, said.

Obama, who was the 44th president of the United States from 2009 to 2017 with Biden as his deputy, said: “We have got to not just listen to folks we agree with but folks we don't”.

“One of my fondest memories of the inauguration was the grace and generosity that President Bush showed me, and Laura Bush showed Michelle.

"It was a reminder that we can have fierce disagreements and yet recognise each other's common humanity and that as Americans we have more in common than what separates us," Obama, a Democrat, said.

Bush, a Republican who was the 43rd president of the US from 2001 to 2009, said that Americans love their neighbours like they liked to be loved themselves. A lot of there is division in our society, they don’t.

"Everybody needs to get off their high horse and reach out to their friends and neighbours and try to make it possible. I'm glad you're there. And I wish you well,” Clinton said.

They sent Biden well wishes, saying they were rooting for his success. They also noted that they would be available to guide the new administration towards accomplishments.

"Mr President, I'm pulling for your success. Your success is our country's success," Bush said.

Obama said: “Joe, I’m proud of you. You and Kamala need to know you’ve got all of us here rooting for your success, keeping you in our prayers, and we will be available in any ways that we can as citizens to help you guide our country forward. We wish you Godspeed”.

The US is the worst affected country from the pandemic with over 24,998,975 people hit with the coronavirus. More than 400,000 people in the country have died of the contagion.

Biden has announced a USD 1.9 trillion coronavirus relief package to tackle the economic fallout from the pandemic, including direct financial aid to average Americans, support to businesses and to provide a boost to the national vaccination programme.

The US is the worst affected country from the pandemic with over 24,998,975 people hit with the coronavirus.

Some 18 million Americans are still relying on unemployment insurance and some 400,000 small businesses have permanently closed their doors.

Biden has said that it is the policy of his administration that the federal government should pursue a comprehensive approach to advancing equity for all, including people of colour and others who have been historically underserved, marginalised and adversely affected by persistent poverty and inequality.

“Affirmatively advancing equity, civil rights, racial justice and equal opportunity is the responsibility of the whole of our government,” he has said.