Afghanistan Crisis: Why Qatar Fosters Close Contact With The Taliban

Qatar has longstanding ties with the Taliban. While this approach is criticized by some, others benefit from the country's contacts. Qatar's main interest is to cement its position as a regional mediator. 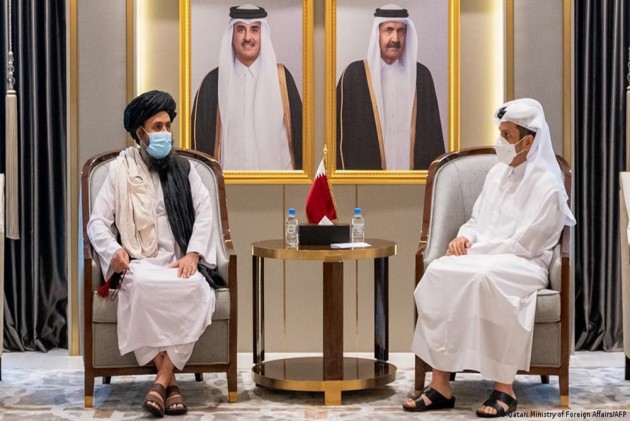 Just a few days ago, US President Joe Biden picked up the phone to thank the Emir of Qatar, Tamim bin Hamad Al Thani, for the generous support in the ongoing evacuation from Afghanistan.

Biden also thanked Qatar for facilitating intra-Afghan talks — even though they had failed even before the Taliban took power.

Germany, meanwhile, criticized Qatar after the Taliban's political leader, Mullah Abdul Ghani Baradar, was flown to Kandahar from Doha by the Qatari Air Force, days after the Islamist militants had swept across the country.

A Taliban office in Doha

The relationship between Qatar and the Taliban is anything but new. As early as 2013, Qatar allowed the Taliban to open an office in Doha, with the support of the US administration under Barack Obama.

At the time, Washington was looking for a neutral place to negotiate with the Islamist militia in order to prepare the withdrawal of troops from Afghanistan.

"I think the idea behind Doha initiating talks with the Taliban was the recognition that there may never be an outright military victory against them in Afghanistan, and that — absent such a victory — it may be necessary to bring them in as part of a political solution," Elham Fakhro, an expert on Gulf states at the International Crisis Group, told DW.

Since 2018, Mullah Abdul Ghani Baradar, who is one of the founding members of the Taliban, has led its representation in Qatar.

However, it is also worth remembering that as little as three years ago, Baradar was released — reportedly at Washington's behest — from a prison in Pakistan, where he had been detained in 2010 by Pakistani intelligent forces working together with the CIA.

Now, after the fall of Kabul, Doha's ties to Afghanistan put it in a unique position.

But some observers accuse Qatar of abetting international terrorism.

"Critics of the talks have also argued that the diplomatic engagement with the Taliban has only granted them some degree of legitimacy that they would not otherwise have had," said Elham Fakhro.

The Doha-based TV station Al-Jazeera has been giving the Taliban a platform to address the public for years. The station also broadcast the Taliban's entry into the presidential palace in Kabul.

"The emirate shows no fear of contact with several problematic actors in the region," Guido Steinberg of the German Institute for International and Security Affairs, told DW. Further examples are Qatar's good relations with Iran and also with the Muslim Brotherhood, a transnational Sunni Islamist organization that has been designated by some countries as a terrorist organization.

"Qatar has been presenting itself as a mediator in regional politics for almost two decades. The primary reason is that it wants to improve its regional position," Steinberg said, adding that "in the past, Qatar was very dependent on Saudi Arabia, in the 1970s and 1980s, it was practically a Saudi protectorate." Qatar wants to free itself from the embrace by its big neighbor by positioning itself as an independent mediator, he said.

(Not) an impartial mediator

With regard to the situation in Afghanistan, Qatar's foreign minister, Sheikh Mohammed bin Abdulrahman Al Thani, commented only a few days ago, that the emirate sees itself as an impartial mediator.

However, the emirate is not entirely impartial, as it set up the office for the Taliban not least for the sake of the United States.

"Qatar is heavily dependent on US protection," Steinberg said. The US maintains a large airbase in Al-Udeid. "And Qatar has no interest in changing that since it fears the power of its neighbors."

Yet Qatar is certainly not appeasing other countries in the region with its foreign policy and its relations with extremist groups, which in 2017 resulted in the so-called "Qatar crisis", when it was blockaded and boycotted by Saudi Arabia, the United Arab Emirates (UAE), Bahrain and Egypt. The dispute was officially settled in early 2021, however, analysts believe that the problems were pushed aside rather than resolved.

"By playing this role of mediation, Qatar is able to strengthen its relations with the United States and other Western, European actors," Elham Fakhro of the International Crisis Group said.

Qatar's quest to solidify its existence

Meanwhile, another aspect remains unclear: How much influence does Qatar have on the Taliban? In the past, the relationship between Qatar and the Taliban has not been entirely free of conflict. For example, Qatar did not want the Taliban to hoist its flag at its headquarters in Doha or to call the building the representative office of the "Islamic Emirate of Afghanistan."

Qatar has also never officially recognized the "Islamic Emirate" proclaimed by the Taliban in 1996. Observers believe that it is also unlikely to happen this time, especially if the US opposes it.

Qatar is officially a Wahhabi state and has contact with various extremist groups. "But Qatar is certainly not interested in the Taliban ruling by force," says Steinberg. Its interest, he says, is to act as mediator and "to appear on the map of regional politics and also of world politics." In this way, Qatar could funnel interest in the West, and perhaps also in China and Russia, in its continued existence as an independent state.

This article was adapted from German by Jennifer Holleis.