Afghans have been left scrambling for cash as banking and money transfer services remain suspended. The Taliban have named an acting head of the central bank to help ease the economic turmoil, which seems a tall order. 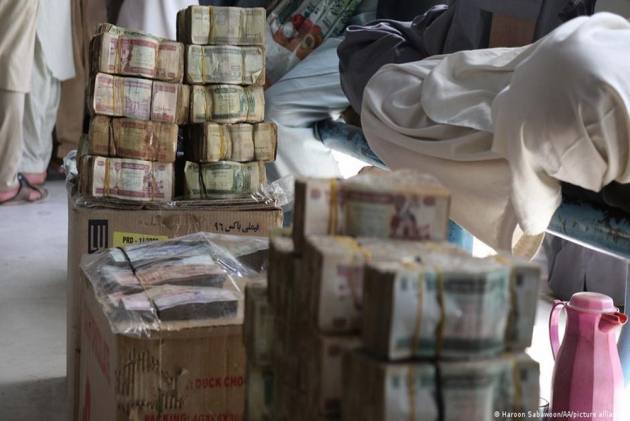 Over a week after the Taliban's takeover of Afghanistan's capital Kabul, its residents are reeling from a severe shortage of cash as banks remain shuttered and remittances from abroad dry up.

ATMs across the city are empty and money exchange is unavailable amid uncertainty surrounding exchange rates and fears of looting.

"The situation with the banks is very bad. People queue up in front of banks, but they remain closed. No one has access to banks, especially in Kabul," Said Imam, a resident of the Afghan capital, told DW.

"Some people haven't been paid for more than a month. Government servants and teachers didn’t receive their salaries. People are running out of cash with their savings locked up in banks."

The situation has been aggravated by an acute shortage of US dollars. The United States has blocked the Taliban government's access to virtually all of the Afghanistan central bank's $9 billion (€7.66 billion) in reserves, most of which are held in the US. The International Monetary Fund (IMF) has also suspended Afghanistan's access to its resources following the Taliban's seizure of Kabul.

With no new shipment of dollars arriving to shore it up, the local currency, afghani, has crashed to record lows, sending prices soaring. Prices of staples like flour, oil and rice have risen by as much as 10%-20% in a few days.

Afghans have traditionally relied on cash transfers from their loved ones living abroad, but in the current crisis, even that lifeline has been lost.

Wire transfer services Western Union and MoneyGram have suspended their operations in the country. Last year, remittances to Afghanistan were around $790 million — around 4% of the country's gross domestic product, the World Bank estimated.

These money transfers have been "extremely relevant" for years, says Afghani-born journalist and author Emran Feroz, as "Afghans have one of the biggest diasporas in the world" and have long relied on help from relatives in Pakistan, Iran, the UAE as well as Germany and the US.

"Average Afghans don't make much money these days," with many seeing their income drop by 90%, he told DW.

How are fuel prices in Afghanistan?

Gasoline prices in the country climbed to $900 per ton amid massive demand from Afghans fleeing cities to safety from Taliban militants.

Iran has chipped in to ease the situation following a request from the new Afghan government, Reuters news agency reported. Tehran, sanctioned by Washington, has resumed fuel exports to its neighbor, which had been suspended since August 6 on safety grounds.

The Taliban have reportedly cut tariffs on imports of fuel from Iran and other neighboring countries to arrest the price spike.

Afghanistan, which does not have enough oil refining capabilities, relies on oil imports from Iran, Turkmenistan, and Uzbekistan. Oil imports from Turkmenistan ceased a month ago because of the security situation, Reuters reported.

"The problem is the banks stopped working three days ago so we might be back to bags of cash," the source told Reuters.

Who is the new Afghan central bank chief?

The Taliban have named Haji Mohammad Idris as the acting governor of the country's central bank, Da Afghanistan Bank (DAB), to help the Afghan economy working again, which was struggling even before the Taliban took control.

An obscure Taliban official from the northern province of Jawzjan, Idris is reported to have worked on financial issues with the previous Taliban leader Mullah Akhtar Mansoor. Idris has no formal financial training, but he headed the Taliban's economic commission.

"There are many people who were unknown to the world, but they held key positions and had great contributions. Haji Idris is among them," a senior Taliban leader said.

Idris' predecessor Ajmal Ahmady, who fled the country before Kabul fell to the Taliban, has warned that the current crisis would lead to higher prices and a weaker afghani. The Harvard graduate also expects the Taliban to use capital controls to prevent outflows.

What about foreign aid?

Delivering aid in the country has become complicated with the Taliban taking control as governments and aid agencies grapple with the dilemma of engaging with the Taliban, which have launched a public relations offensive to show a moderate face.

"If you are an aid worker at a state hospital, you are serving a regime whose legitimacy is in the balance," said Robert Crews, a Stanford University history professor. The author of the 2015 book "Afghan Modern: The History of a Global Nation." "If everybody goes home, will the state collapse?"

A large part of the Afghan government's budget is funded by international aid, without which the country's economy would collapse.

"The Taliban are going to require substantial outside funding unless they retreat to what they did from 1996 to 2001, which was essentially run the government to minimalist levels," said Michael McKinley, who served as the US ambassador to Afghanistan in 2015-2016 and is now with the Cohen Group consultancy. "Living off the narcotics trade did not provide them a path towards staying in power."

Emran Feroz warns any international sanctions would be "wrong" at this point, as they "punish the whole population collectively and could lead to another crisis."

The European Union said on Tuesday it would increase its support for Afghans still in the country and those fleeing it to over €200 million ($235 million) from over €50 million. The bloc said it would seek safety guarantees on the ground and would coordinate with the United Nations to ensure the aid reaches the most vulnerable.