Much as I wanted to and despite several attempts, till now I have not been able to write about her. She was an awe-inspiring person. And I was never able to muster enough courage -- I found it too audacious to even try and fathom her in words. 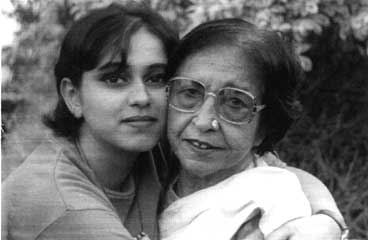 On the 4th of February at 1:10 p.m. Malka Pukhraj left this world leaving a void that will now echo only with her voice and memories of her.

Much as I wanted to and despite several attempts, till now I have not been able to write about her. She was an awe-inspiring person. And I was never able to muster enough courage -- I found it too audacious to even try and fathom her in words. Moreover, I couldn’t find the words to do justice to her person and spirit. Today, as a tribute to her, my grandmother, I venture to share some memories, some ‘moments’ with her. I pray that I am as true to her being and soul as she would have liked me to be.

It is sad and ironic that an understanding and worth of a person eludes us until the day she is gone. Although there was never any dearth of love and admiration in my heart for my grandmother, yet I find her coming to me in true essence only after she is no more. And with this growing realisation, her absence becomes even more painful, for there was so much of her left unshared between us.

The world has known her as Malka Pukhraj, the great singer. For me she was not only a parent -- she adopted and brought me up from the age of one -- but also a friend closest to my heart. It would therefore be more real if I spoke about her not as Malka Pukhraj the singer, but ‘Mama’ (as I called her), the woman and the human being as I perceived her.

Being mother and daughter, we had the ebbs and flows in our relationship, as is common to other mothers and daughters. As a daughter to my grandmother, there was a special and unique bond between us, which I realised as time went by. She too confirmed this special bond when she entrusted me with the task of publishing her autobiography. In the course of working on her book, she opened up and laid herself bare to me like she never had before.

For me too, it was a process of rediscovering her in a new light. For the first time, I began to see facets of her inner persona come together with her outward struggle for achieving her destiny as a woman. Born in humble surroundings, she always believed in living life on centre-stage. And from there, she commanded respect, awe and affection of people whom she touched in innumerable ways.

As an individual, Mama was the embodiment of life. She was Durga in her fearless strength and ferocious courage as a woman, and Sarasvati in her fine sensibilities and aesthetics and her desire for learning. While she seemed invincible and firm, at times she was extremely vulnerable and soft. She was every bit a human being with all her strengths and weaknesses.

The defining feature of hers was her iron will and her unflinching belief in herself (and in God), whereby she lived life entirely on her own terms. She did not go by conventional morals and behaviour because, for her, what her heart and mind told her was the truth. Hence, she truly lived, in every sense of the word, her life to the fullest. In the worst of circumstances she would stand undaunted, never uttering a word of remorse or complaint. Instead she would repeat, "Allah key fazal se sab theek ho jaaye ga" (God willing, all will be fine) without the slightest bit of strain in her voice or demeanour. Her admirable fortitude and determination was a source of strength and inspiration, not only for me, but many others whose lives touched hers.

Mama was passionately driven in her never-ending thirst for creative expression.Ranging from music to embroidery, patchwork, cooking, gardening, reading and finally writing. She applied herself completely to whatever she was doing, and excelled to her heart’s content, in all these areas. Even rearing a child was no less than an act of creation for her -- as fulfilling as creating a piece of art. She would, therefore, always be ready and willing to adopt yet another child and take on his/her upbringing.

Talking of creativity, the most distinct feature of Mama’s anatomy were her hands -- there was a living and thriving connection between her mind and her hands, which were her tool to express and unfold her inner creativeness. Her hands remembered and spoke in the vocabulary of an age, a people, and a way of life gone by, where creative expression was not alienated from hands by technology. This can be seen in her exquisite embroidered tapestries and patch work quilts, her beautiful handwriting, the delicious food she so painstakingly prepared, the endless hours she spent tending her plants, and the famous gestures of her hands while singing (and how can I forget, the beatings she so unsparingly gave me?) 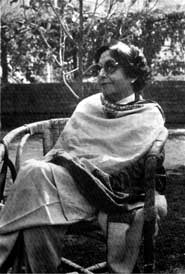 Mama was always energetically geared into life and there was never a moment when she would be idle. If not doing something at home, she would be getting her car fixed at the mechanic’s on a scorching hot afternoon, looking into the engine and insisting that the mechanic was clueless about cars and should take her advice. If not making achaar, she would be driving off to Mozang to get ajwain and kolonji to make some. If tired and bored with Urdu, she would be searching the whole of Lahore for someone to brush up her Farsi (Persian). Her untiring spirit was also evident in her readiness to demonstrate kathak movements at the slightest of suggestion.

And God forbid if she discovered there was a talking parrot available in town. She would not rest until she found it and brought it home. Her day would then begin and end singing and talking to the parrot. Once she even bought a Walkman to record her voice singing "Allah Allah karya karo, gham na kisi ko Diya karo, jo duniya ka malik hai, naam ussi ka liya karo" and play it to the parrot (of course, I fought with her over it for days, because I felt the parrot was more fortunate than me to get a walkman).

Talking of animals, Mama loved all but had a special fascination and curiosity for monkeys. For, in her own words, "they resemble and behave like humans". It was her dream to acquire a baby monkey as a pet and teach it all the things that humans do. And so she did once, but spoilt it so much that it hardly behaved like a human.

At her core, she was a simple soul. Despite her wealth and fame, she was extremely down to earth and indifferent to the frivolities and unnecessary luxuries of life. These were insignificant and weak indulgences not meant for a tough pathaan woman like her. The only extravagance she allowed herself to enjoy was fine jewellery -- she would spend hours at Farhat Ali’s (one of the oldest jewellery makers in Lahore) designing the most unusual pieces for herself.

Her strength, uncompromising focus and ruthless discipline combined easily with the gregariousness and warmth of an affectionate woman. Her ability to appreciate as well as display humour even in the most trying of times was not only admirable but also inspiring. Although not a very talkative person (because she believed frivolous talk was a waste of time) yet, when she wanted to, there was no stopping her. Her art of story telling was so authentic that she would have her audience captivated by her mesmerizing, rhythmic voce, the details with which her memory served her (as also evident in her book), the gestures she used, and the way she so heartily laughed at the humorous side of an incident.

As a mother, she was not the sort to express her love and affection in the conventional ways and was a strict disciplinarian. Her sincerity, concern and love were all the more evident in her strictness. The end of our arguments was always predetermined -- I would walk out of the room crying and howling, banging the door behind me. I did so because I knew that ten minutes later she would be standing at my door saying in a firm yet affectionate tone: "Come now, wipe your tears. You look very ugly crying. I have cooked delicious ‘chucha’ (young chicken). Come and have it." On my refusal, she would say "Oh you unlucky one! If you miss this chucha you will regret it all your life!"

Similarly, when I would walk out of my singing lessons, which were extremely difficult and trying as she demanded perfection, she would either call or come after me immediately and say: "Come back right now. How dare you leave like this!" Of course that is all I wanted. She would make a gesture with her eyes towards the harmonium, and with a hint of a smile, say, "Sit down and sing" and tell the maid: "bring her tea"

Her vanity and vivacity even at the age of ninety was delightful. Raza Kazim, a close friend of hers who liked spoiling her, would remark flirtatiously about her eyes, her jewellery, her clothes and she would lap it all up, wallowing in the attention like a sixteen year old. Raza was also instrumental in getting her autobiography published. Today, dwelling on the loss of a friend, he says that her greatness lay not in her inborn genius, but her desire, ability and strength to couple it with the labour, cultivating it to the extent possible. I think this comes closest to the essence of Mama’s life and person.

I could write a tome and yet sum up only half of what Mama was. Her loss has created an empty space in my life, which will never be filled again because it cannot. She was the only family and true friend I ever had. The one consolation I find in her going away is that she is in a better place and left this world richer, having achieved all that she desired and set her mind upon.

Mama, I miss you. By being there you made my life worth living. Now I have your memories, which are just as dear to me.

Of Mice And Money Men