With Sikka At Infosys Helm, Not Just Revenue, Share Prices Too Plunged

According to figures from Infosys website, Sikka’s quarterly performance was much below his predecessor CEOs who were all founders... 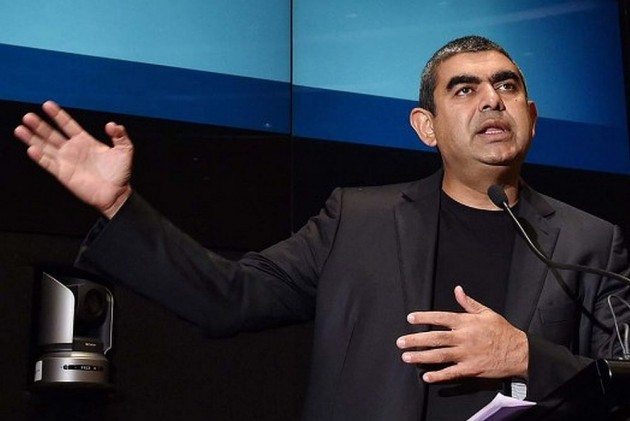 Infosys CEO Vishal Sikka’s tenure, it seems, has not just been marked by low single digit growth in revenues and net profit. The company has also seen its share price plunge in the months that Sikka has been in the chair.

However according to figures from Infosys website, Sikka’s quarterly performance was much below his predecessor CEOs who were all founders, even those of Kris Gopalakrishnan and S. D. Shibulal whose tenures were not exactly golden years for Infosys.

Now it comes to light that Infosys share price in the market dropped drastically under Sikka’s tenure so far. According to BSE data, Infosys share price was at Rs 3,747.65 in September 2014 or soon after Sikka took over. It went up by 16 per cent to RS 4,359. 25 in November 2104. However after that it has never reached that level and has been constantly falling.

The stock performance of Infosys is partly due to market forces and external environment and global developments while partly it could be because of Sikka’s performance as CEO and the company’s indifferent quarterly results.

The next few quarters will be crucial for Sikka as the Indian industry gears up to face global challenges including that from the outcome of Brexit which will affect UK market, one of the largest for India and Donald Trump’s H1B policies which is likely to affect Infosys more as over 60 per cent of its revenues today come from the US market. But Sikka has time and the board and the founders confidence as of now which may allow him to bring something out of the hat to make things work better for Infosys in the coming months. The company’s 2 lakh employees and investors are eagerly looking forward to that.