At a media briefing, Montgomery County police Chief Marcus Jones narrated a 28-minute-long compilation of bodycam video excerpts and a recorded phone call between police and the driver, Ryan LeRoux, before the July 16 shooting in Gaithersburg 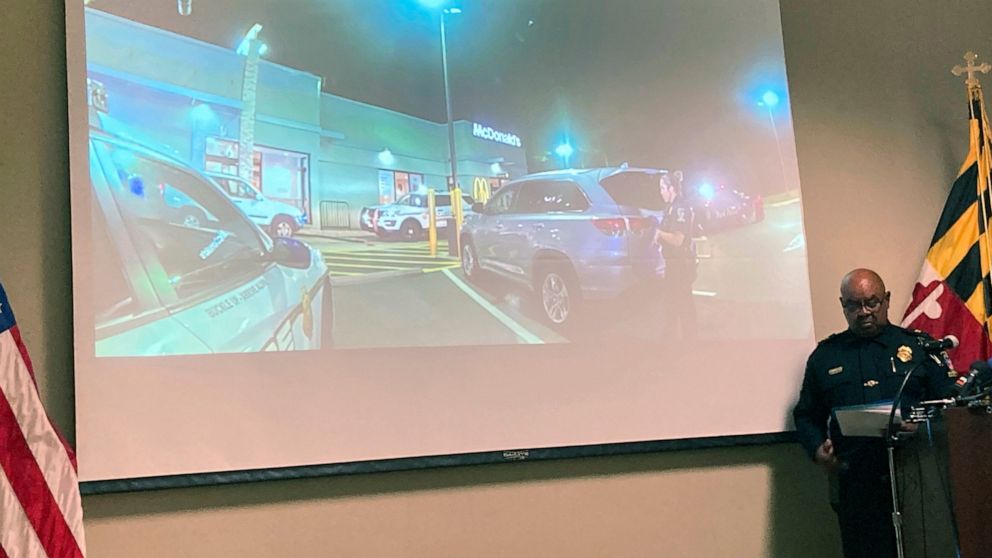 Body camera videos released Tuesday show a 21-year-old Black man moving inside a parked car moments before police shot and killed him outside a McDonald's restaurant in Maryland.

At a media briefing, Montgomery County police Chief Marcus Jones narrated a 28-minute-long compilation of bodycam video excerpts and a recorded phone call between police and the driver, Ryan LeRoux, before the July 16 shooting in Gaithersburg. But the chief didn't express any opinion about whether the Friday night shooting was justified.

Prosecutors in a neighboring county are investigating.

Jones, who didn't take any questions from reporters, said police recovered a gun from LeRoux's lap after four officers opened fire on him. The chief didn't say whether investigators believe LeRoux raised a weapon or posed a threat to police during a standoff that lasted approximately 30 minutes.

Jones showed segments of videos that captured the shooting from the perspective of an officer's body camera and a body camera that officers had placed in a drive-thru window closer to LeRoux's sport utility vehicle.

“Their cameras do not replace the human eye and what the officers saw that evening,” Jones said.

An officer responded to a trespassing call that LeRoux had ordered food, refused to pay for it and wouldn't move his SUV from the drive-thru lane, according to police. The officer immediately radioed that he saw a gun on the front passenger seat and repeatedly ordered LeRoux at gunpoint to raise his hands and slowly unlock one of his doors with his left hand.

“He's awake, but he's not listening to my commands,” the officer said over his radio. “He's got his hands on his phone. The gun is on the passenger seat. Get cover!”

Officers taking cover behind a shield approached LeRoux's SUV and placed "stop sticks" in front of the vehicle. Police placed the camera in the drive-thru window to get a better vantage point of the gun in his car, Jones said.

A woman from the police department's emergency command center spoke to LeRoux over his cellphone. LeRoux said he saw the officers and compiled with their commands to raise his hands.

“I can hear them just fine," he said.

“We're just trying to help you here,” the woman told LeRoux, asking him to extend his hands out a window.

Jones said the officers didn't see LeRoux's hands up or out the window.

“What's going on, man?” the sergeant asked. “Hello? He just hung up on me.” The video from the drive-thru window shows LeRoux sit up from a reclining position moments before gunfire erupted, shattering the window.

“He's up!” at least two officers shouted just before the shooting.

A crisis negotiator was en route the scene but didn't arrive before the shooting, Jones said.

Leroux died at a hospital. A loaded Glock 47 was recovered from the scene, according to the chief.

The four officers involved were placed on administrative leave, a standard procedure after a shooting. All four officers are white, and LeRoux was Black, police department spokeswoman Shiera Goff said.

“The continued killing and murder of young Black men in this county has to stop. It's unacceptable,” said Racial Justice Now co-founder Zakiya Sankara-Jabar.

Sankara-Jabar said the coalition is calling for the police chief's resignation.

“It seems to me that this chief does not have control of this department at all," she said. “He continues to make excuses for these officers under his leadership." The Howard County State's Attorney's Office will review LeRoux's shooting under an agreement with its counterpart in neighboring Montgomery County.

The coalition planned to hold a press briefing Tuesday with LeRoux's family at a park in Gaithersburg. Police showed body camera footage to LeRoux's father, Paul, who said the video did not show his son picking up the gun or pointing it at police, according to the coalition.