We’ve just come across spy images of the all-new Triumph Scrambler 1200 undergoing tests. Going, by the images, the motorcycle seems like it’s close to hitting the production line. Nonetheless, these images have come as a delightful surprise for us off-road bike enthusiasts.

More Powerful
The new Scrambler 1200 is expected to borrow its engine from the Bonneville Bobber. The 1200cc HT (high torque) motor should help the Scrambler produce 76PS of power and 106Nm of torque, making a lot more powerful than the Triumph Street Scrambler that produces 55PS of power and 78.84Nm of torque. So, expect the biggest Scrambler to offer some hair-raising fun when you run out of tarmac and get to play with all that torque. The Scrambler 1200 is also expected to pack a lot more rider modes when compared to the Street Scrambler. This could even include an off-road mode to let the tail loose for some added drama. 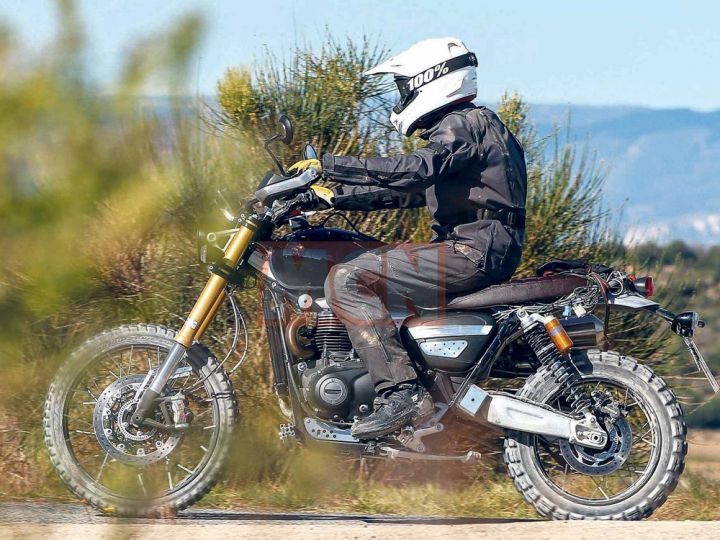 Off-Road DNA
The other major change comes in the form of the long travel suspension. While the Street Scrambler gets conventional forks with twin shocks that offer 120mm of wheel travel, the Scrambler 1200 gets long-travel Showa USD forks and Ohlins shock absorbers that seem to be bolted on to a longer swingarm. We expect 200mm of suspension travel on the new model, which should make it as capable as the big adventure tourers such as Triumph’s own Tiger range of motorcycles.

Despite the long-travel suspension, we think the Scrambler 1200 gets a moderate seat height as the riders in the picture are able to place their feet on the ground without much hassle. The premium suspension kit isn’t the only component that enhances the Scrambler’s off-road ability. The new adventure tourer is likely to get 21-inch wheels at the front. In comparison, the Street Scrambler makes do with a 19-inch front wheel. This should improve the bike’s off-road ability, albeit at the expense of being stable enough on tarmac. And since the spokes on the wheels run to the edge of the rims, you can fit in tubeless tyres too. Also, we expect the Scrambler to be offered in two variants - Touring and Off-Road. 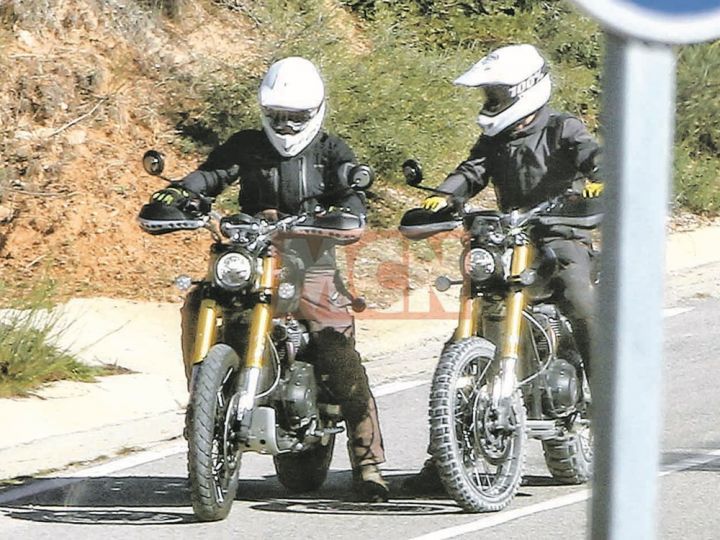 Also part of the equipment list are handguards, a large engine bash plate and brush-guards on the bodywork to prevent damage from off-road boots. The styling is typical of Triumph, as is seen from the quilted leather bench seat, the minimalist LED headlight and the small analogue clocks. There are some elements such as a front mudguard which are clearly missing from the test bike. This could indicate that the bike is inching closer to production-ready state. From the images, it is evident that the Scrambler 1200 will be equipped with dual discs with Brembo monoblocs at the front and a Brembo-powered disc brake at the rear. Owing to its off-road nature, we expect Triumph to offer switchable ABS too.

Expected launch time
With the Tiger range due for launch in the coming days, we expect Triumph to unveil the production-ready Scrambler 1200 at EICMA in November this year. As for the price, expect it to cost around Rs 12 lakh in India.