To Take On BJP At Its Own Game, Congress To Distribute Puja Items In Gujarat's Saurashtra Temples

The move is seen as a way to counter BJP’s accusation in the run up to the 2019 General Elections that the party is anti-Hindu. 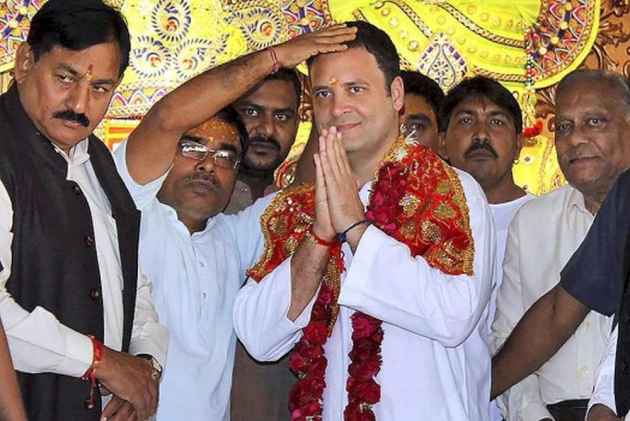 The Congress which had won the Saurashtra seat in Gujarat by over 12 seats is planning to form “Sriram Suryodhay-Sandhye Aarti Committees” in 148 villages across the town to revive the local Ram Temples, which comes across an attempt to take on the BJP at its own game.

The Congress state unit will distribute puja items to volunteers who agree to perform aartis 14 times a week, in temples that are not much frequented by devotees, reported the Times of India.

“A kit of “shankh, jhalar and nagadas (conch shells, decorations and drums) will be given to temples which the committees will revive in “spirit and tradition,” the report quoted Leader of Opposition Paresh Dhanani as saying.

“Gujarat has been a laboratory of the RSS but people have started asking questions as to what the party that calls itself a Hindu party done to preserve and promote our traditions. Ayodhya is far away, we want to start with neighbourhood temples. It is a social movement to get the youth involved in matters of the village,” Dhanani reportedly said.

The move is seen as a way to counter BJP’s accusation in the run up to the 2019 General Elections that the party is anti-Hindu.

During the campaigning for Gujarat Elections held in December last year, Congress chief Rahul Gandhi visited around 20 temples in the state. The BJP had then said the visits were an attempt to consolidate Hindu votes.

"We wish that Congress sheds its pseudo-secularism and respect mainstream Hindutva, but their gimmicks to get votes will not work in Gujarat," Deputy Chief Minister Nitin Patel had said.

The Congress party spokesperson had even asserted that Gandhi was a 'Janeu-Dhari' (the one who wears Brahminical thread) Hindu, which was viewed as an attempt to recast Rahul Gandhi as a Brahmin.

The fumbling janeu clarification came as a response to a row that erupted over Rahul's visit to Somnath Temple in Gujarat wherein his name was allegedly listed as a non-Hindu visitor in the visitor-book.

The BJP took the opportunity to slam the Congress for not belonging to the Hindu faith, while the Congress party attempted to prove otherwise.

Finance minister Arun Jaitley, especially, enjoyed taking a dig at Congress’s new-found Hinduness after Rahul’s Temple Run. “If someone wants to mimic us, I have no complaint. But why would anyone prefer a clone to the original?” Jaitley asked.