The LTTE is yet to be outlawed in Australia which is also one of its largest sources of funding. But its recently established linkages with the al-Qaeda has brought it under the scanner. 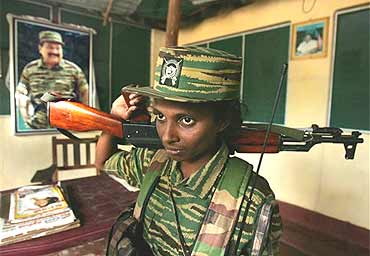 With an estimated Tamil population of 30,000, Australia is one of the largest sources of funding for the Liberation Tigers of Tamil Eelam (LTTE). In confirmation, the Sri Lankan foreign secretary Palitha Kohona disclosed on May 1, 2007, that the LTTE internationally raises approximately USD 10 million to USD 30 million a month, of which almost 20 to 30 per cent comes from Australia.

However, acknowledging the fact that funds were being raised in his country to finance LTTE operations on May 2, 2007, Australian Foreign Minister Alexander Downer stressed that the amounts raised were not huge: "Some of it comes from Australia, probably nothing like 30 per cent, but small amounts do come from Australia. I don't think there's any doubt about that. It's been very hard to collect evidence, though, about money in Australia and paid directly to the Tamil Tigers, which is, an offense.'' While many of the Tamils in Australia identify with the LTTE's cause, only some are known to be engaged in raising funds.

But Australia is emerging as a "central front of a distant war -- a rich source of millions of dollars in funds and equipment for the Tamil Tiger terrorist group to help wage their separatist war in Sri Lanka," The Weekend Australian reported on May 5, 2007. Extracts of the report titled 'How tsunami cash bankrolled Tigers' stated: "Sources say LTTE had been raising modest amounts of money here since the 1980s but its operations were transformed by the 2004 Boxing Day tsunami which gave the group its first chance to milk large amounts of cash from Australians."

Australia, in pursuance of UN Security Council Resolution No. 1373 on suppressing the financing of terrorism, on December 21, 2001, proscribed 25 terrorist organizations, including the LTTE. The purpose was to bring the LTTE under an asset-freezing programme and stem the flow of funds to the group from Australia. Under this programme, it is an offence to provide or even possess any asset belonging to a listed terrorist group or individual, and this offence is punishable by up to five years' imprisonment.

The LTTE, for which procuring adequate finances lies at the heart of its terrorist campaign, reportedly raises funds in Australia through a range of front organizations working among the Sri Lankan Tamil diaspora. The rebel cover organisations have gradually secured a considerable degree of visibility in Australia, with networks of offices and cells to carry out propaganda, organise the procurement and movement of weapons and raise funds from the Diaspora.

There are at least 300 LTTE activists spread across Australia. Some of them use "intimidatory" or "emotional tactics" to attract funds from other Tamils and those "who refuse to give money are labeled traitors and subsequently isolated by the community." LTTE donors in Australia are "spread across the economic spectrum, ranging from grocery store owners to medical specialists, lawyers and media players."

According to the Victoria-based Society for Peace and Human Rights, a 54-year-old Tamil Australian, identified as Thillainadarajah Jeyakumar, a lecturer at Swinburne Technical College in Victoria, was the chief agent of the LTTE in Australia and the person behind the LTTE network operating in the country to finance, lobby and direct the operations of pro-LTTE Tamils. Jeyakumar, who died on March 29, 2007, was posthumously conferred the title of Maamaniathar (Great human being) by the LTTE chief Velupillai Prabhakaran, an award conferred only to its hardcore cadres. He was the force behind uniting the Australian Tamils to provide moral support and help to the people in his homeland. He was the second to receive this award in Australia, the first recipient being C. J. Eliezer of La Trobe University, the founder of the Australian Federation of Tamils, the first LTTE front established in Australia.

Tamil Week in its March 31, 2007, edition reported that Jeyakumar hatched the plan to send the light aircraft that dropped the bombs on the Katunayakae Air Base on March 26, 2007, with the international arms procurement agent of the LTTE, K. Pathmanathan alias 'KP'. Singapore-based terrorism expert Rohan Gunaratna reiterated that the LTTE had been procuring aircraft, arms, explosives and other technological devices from Australia for more than a decade and that the LTTE were buying light aircraft from local manufacturers in the mid-1990s and, as recently as 2006, bought remote control devices to detonate bombs in Sri Lanka. Gunaratna records: "It started in the mid-1990s but the procurement activities continued as far as last year in Australia. The last items they purchased were remote control devices which have now been uncovered in Sri Lanka with Australian markings." Gunaratna believes governments had been slow to react because they had been so focused on stopping Islamist extremists: "Within the intelligence community now it's very well established that because governments turned a blind eye to this today there are light aircraft the Tigers are using to mount attacks in Sri Lanka."

The pro-LTTE Website Tamil Net summarizes Jeyakumar's contribution to LTTE activity in Australia: "Praised as the leading force behind the Australian Tamils Co-ordinating Committee for the last two decades, Jeyakumar is credited with uniting Australian Tamils towards supporting Tamil Eelam struggle and for his unwavering commitment to help the Tamil people." Such assertions clearly suggest that the Australian Tamils Co-ordinating Committee (ATCC) is a one of the LTTE's leading frontal organizations, among many others that coordinate the outfit's operations in Australia.

Though a number of LTTE front organizations have been raising funds in Australia, a pivotal role has been played by the Tamil Rehabilitation Organisation (TRO), which was established in 1985, with an extensive network of branches operating in at least 28 countries. The TRO works under the guise of a charity organization and is reported to have collected close to AUD 1.1 million in donations from Australia following the Tsunami in December 2004. The pro-LTTE lobby managed to raise funds from the state of Victoria for a promised blood bank which never came into existence. The Victorian government also granted AUD 850,000 to a fishnet project in Jaffna; once again, the money was not used for the project. According to a November 1, 2006, report, a family of three -- Sivarajah Yathavan, his wife Abirami Yathavan and P. Senthuran, his father-in-law -- has taken full control of the LTTE operations in Victoria.

Frontal organizations of the LTTE not only raise funds by getting donations from the Tamil people willing to fund the 'final war', but also resort to extortion and intimidation of the Tamil Diaspora. Corroborating this, Sri Lanka's Honorary Consul in Melbourne, Rodney Arambewela, disclosed that there had been a large number of complaints from the Sri Lankan community relating to intimidation for donations by the LTTE. The Tamil community in Australia is under a lot of pressure to help the LTTE, he stated, adding, "Unfortunately some of the people who have been contributing these funds are being intimidated, that's what we hear, been pressured to contribute." The LTTE also takes recourse to narcotics and human trafficking to augment its revenues.

LTTE fronts in Australia "use a variety of tactics to attract donations, including music festivals, dance concerts and radiothons. Typically, money raised is put into bank accounts in Southeast Asia before it ends up in the pockets of arms dealers and other LTTE intermediaries in the region. To conceal the tracks, funds are often transferred into legitimate bank accounts in Malaysia and Thailand." Following the funding trail in one case, documents obtained by The Weekend Australian showed one Tamil group transferring USD 400,000 out of Australia between 2000 and 2003 for alleged weapons procurement. Couriers, usually LTTE sympathisers from Melbourne or Sydney, are sometimes used to carry the money to Kuala Lumpur. Sources indicate that the money is then moved by intermediaries to either Indonesia or Cambodia where the LTTE "gets a lot of its military weapons".

The Australian government in January 2005 launched a two-year joint investigation by the Australian Federal Police (AFP) and Victoria Police into claims that charity groups were raising funds for the LTTE. The joint investigation led to many arrests and disclosures. On November 23, 2005, the AFP raided premises of LTTE operatives in Melbourne and arrested more than 15 persons, including Jeyakumar and 'Economic Advisor' Jeyarajan Maheswaran. The AFP also seized computer hardware, passports, cash, diaries, bank receipts, and cheque books from the operatives.

Two prominent LTTE leaders in Australia -- Sivaraj Yathevan, in charge of Eela Murasu, a Tamil community paper, and his aide Arooran Vignanamoorthy -- who had access to AUD 526,000 in two bank accounts between August 2001 and December 2005, were arrested on May 1, 2007, during raids conducted on 10 premises in Melbourne's east -- at Vermont, Glen Waverley, Mount Waverley, Dandenong, East Burwood -- and in the Sydney suburbs of Toongabbie and Parramatta. Vinayagamoorthy reportedly spent USD 97,000 on transmitters and receivers from Tasmania and Queensland used by the LTTE in explosive devices. The duo was charged of using Tsunami relief charity money, collected for the victims of the devastated Tamil areas, for terrorist activities in Sri Lanka. The offences are alleged to have occurred between July 6, 2002, and May 1, 2007. Federal police counter terrorism spokesman Frank Prendergast disclosed: "It will be alleged in court that these men are members of an organisation engaging in terror activities overseas, and they have been providing active material support to that group. They had duped Australians who thought they were donating money to Tsunami victims in Sri Lanka, as well as other charities." He, however, stressed, "There was no evidence that the men planned to carry out any terrorist attacks in Australia.

With growing LTTE activities in Australia, the government is considering a ban on LTTE under domestic law. Australian foreign minister, Alexander Downer, addressing a gathering at the International Institute of Strategic Studies (IISS) in London on December 18, 2006, stated, "We are seriously considering banning the LTTE. In the past two weeks Australian authorities have had discussions concerning the LTTE and a decision was expected to be taken shortly." He added further that Australian intelligence services had monitored the activities of some Tamil charities that had used the cover to illegally raise funds for the LTTE in Sri Lanka.

The large numbers of Tamils present in the country, and the political and electoral influence they wield in certain constituencies has, however, precluded effective action against the LTTE, and the group is yet to be outlawed in Australia. There is, nevertheless, a growing realization that, even though Australia's interests have not, thus far, been directly challenged by the LTTE, the group's activities are no longer confined to Sri Lanka alone, and it has, according to the IISS 'The Military Balance 2007', established commercial links with the al Qaeda as well. There is, consequently, a danger that the Tamil rebels can, in the event of their failure to achieve their goals in Sri Lanka, engage in activities that could seriously threaten security in other countries where they currently find safe haven and patronage.