In an ironic stroke of gender neutrality, the recently passed resolution by six high priests excludes all half-Parsis, even those with Parsi fathers. Till now, only the children of women who married out were ostracised. 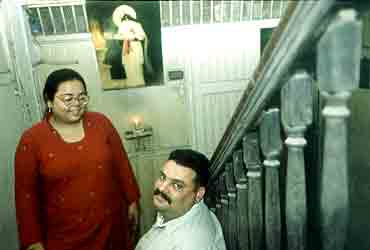 J.R.D Tata was no Parsi. Not if his community accepts what their pontiffs decree. So what if he's the icon they're proudest to own? His parentage excludes him. At least if a new diktat of the Parsi priesthood is applied across the board. Recently, six high priests passed a resolution which declares marriages outside the community irreligious. It also bans the offspring of such marriages from the Zoroastrian faith.

So while JRD's father might have been a good Parsi Zoroastrian, he slipped when he "married out". With a French mother, JRD never really belonged. Other blasphemers with alien spouses include Nusli Wadia, Adi Godrej, Zubin Mehta, the late editor Behram `Busybee' Contarctor - and a few thousand more.

It's a community tiny enough to fit into Kolkata's Eden Garden stadium, but the orthodoxy's stand is going to shrink it further. The 50,000 bawas of Mumbai were jolted by the new development. Raking up an issue that's simmered for generations, the high priests got together and published their controversial resolution in the Jam-e-Jamshed newspaper on March 23. So long, JRD.

In an ironic stroke of gender neutrality, the resolution excludes all half-Parsis, even those with Parsi fathers. Till now, only the children of women who married out were ostracised.

But the clergy's concerns about the "parsi identity" clash with reality. At least 30 per cent of the community is marrying out and the rate has risen by a steep ten per cent over the last decade, says Jehangir Patel, editor of the community journal Parsiana. There are those who support the move. "They knew marrying out was wrong but they still want all their rights. They can't have it both ways," says Mithu Jessia, a match-maker who is trying to promote marriages within the community.

But many are reacting with outrage and rejection. Newspapers in Mumbai - where nearly half the world's Parsis live - have been awash with letters decrying the "Talibanisation of Zoroastrianism". One dissident priest has been placing ads declaring he's willing to conduct mixed marriages. He has long been excommunicated and banned from all agiaries.

The high priests defend their decision. But their stand is complicated by the fact that some of them, in the past, have condoned the opposite of what they now say is divine truth. The curious case of the Bombay Dyeing magnate Neville Wadia punctures priestly high ground. Less than a decade ago, five high priests - including a few who signed the current resolution - agreed to his initiation into Zoroastrianism through the navjote ceremony when he was in his eighties. His father, Sir Ness Wadia had converted to Christianity and married an Englishwoman. Neville had been raised as a Christian and to complicate matters, his wife was no full-blooded parsi either. She was the daughter of Mohammad Ali Jinnah and his Parsi wife. "That was an exception. He had Parsi blood. The family had done a lot for the community," argues high priest Firoze M.Kotwal who sees no dichotomy between his assent to the Wadia navjote and to signing the recent resolution.

Many are not convinced by the new decree. "Look at me," says the portly young archeologist Kurush Dalal. "I'm a pure bred Parsi but do I look anything like our ancestors from the Iranian plateau?" True, he does have the bawa humour but the porcelain complexion must have skipped a generation. "Our blood has been diluted over centuries anyway. Who's given six people the right to issue dictats?" Kurush is from a religious family but when he wed his Bengali college buddy Rhea, two years ago, there wasn't much opposition. A priest at the function even said he hoped to meet them again at the navjote ceremony of their child.

Till the edict, no one disputed that Aruna Jehangir's three daughters were Parsis. A Sindhi married to a Parsi, it was ironically she who tutored them when their navjote approached. "My husband was travelling so I had to learn the Parsi prayers and teach them to my kids. They have been brought up in the Zoroastrian faith. You can't take that away from them," she says. In Iran, where Zoroastrianism originated, Aruna was astonished to see that the rules are laxer than in India. "Although non-Parsis are not allowed to enter fire temples, I was allowed in. But in India, we're regressing," she says. But some parents like salesman Jamshed Mehta, married to a Christian is worried. "My sons have not yet undergone the initiation ceremony. What if the priests refuse to conduct it?"

Unhappily for the orthodox clergy, there are enough "renegade priests" willing to bend their rules. "This is hypocrisy. Mixed marriages and navjotes of their children have been going on for years. The high priests themselves have blessed them," fumes Framoze Mirza, who says his dissident ads are drawing many responses. It's his belief that the Parsi temples or agiaries will collapse if the diktat is ever enforced. Ninety per cent of the helpers in agiaries, he says, are of mixed parentage.

The high priests cite scripture to back their decree. "The Vendidad clearly says that our God, Ahura Mazda would be displeased by a union between a Zoroastrian and non-Zoroastrian" But others say that the Gathas, considered more central scriptural texts, make no such demand. The question of what the scriptures actually say was considered settled after a high profile high court case in 1908 - the fallout of JRD Tata's French mother being refused admission into a fire temple. After consulting with several prominent priests, the judges found the scriptures actually encouraged or "enjoined" conversions, though in practice the Parsis tended to not to convert. But what they did do was induct children of Parsi fathers into the faith, a custom that the judges legally recognised. "Those judges only consulted reformist priests," is Kotwal's rejoinder.

When asked how the community would survive such religious restrictions, Kotwal said, "We have survived hundreds of years of persecution, so where's the question of dying out? It's better to have fewer, more devout Parsis. "The Parsis had arrived in India to escape the Arab persecution in Persia about 1200 years ago and were given shelter by the King of Gujarat. It stands to reason, say historians that they multiplied though marrying out. "Even the spread of the religion to other countries suggests that there must have been an element of conversion and intermarriage," says historian Mani Kamerkar who has co-written a book on the arrival of the Parsis to India.

The strident orthodoxy in a community as westernised and educated as the Parsis is quite a paradox. The high priests say they hold sway over the majority sentiment and only the elite minority are liberals. "The fact is that in their hearts, most Parsis prefer to marry other Parsis," says Kotwal. But if that's the case, why the need to pass such a resolution at all? Reformists like solicitor Berjis M Desai are scornful of this assessment. "The liberals are the majority but they are silent and prefer to not get involved. The orthodoxy is a fringe group that manages to create a big ruckus and get noticed." The priesthood, he feels it motivated by the fact that they are losing power in the community. "They have virtually no clout compared to a century ago," agrees Patel of Parsiana.

As an alternative power centre, the Parsi Panchayat - which administers the affairs of community properties, trusts and housing colonies - has always wavered. In the past, it has thrown in its lot with the priests but has at times supported reforms. Though the resolution was addressed to the Panchayat, it has yet to take a stand. "Who knows what they will decide? Their trustees don't want to antagonise the conservatives. Everyone wants their chair," charges the dissident priest Mirza.

Women who have married out hope the ruckus will lead to some thought on the gender bias in the community. Parsi women who marry out are ostracised and their children are considered outsiders. This despite the fact that the Special Marriages Act, 1952 grants them the right to practice their religion after marriage. Till today, many hesitate to enter fire temples and have, in the past, been barred from the Tower of Silence for their last rites. They are also debarred from Parsi hospitals and sanatoriums. "Today, the men who marry out are upset but the women have been upset for years," says Meher Amersey who heads an association for intermarried Zoroastrians. The body was formed to lobby for the case of Roxanne Shah, a young woman married to a Gujarati who was refused entry into the Tower of Silence for her last rites after she died in a car accident.

Could there be some retreat under fire? High priest Kotwal has begun to speak of the resolution as a guideline rather than a fatwa. But their critics aren't buying. They remember another controversy where the will of the priests prevailed. Getting their way over reformers who tried to modernise death rites. So the stage is set for a community drama, only this one will be no Parsi comedy.