Harshal Patel became the 17th bowler to take an IPL hattrick in history when he dismissed MI's Hardik Pandya, Kieron Pollard and Rahul Chahar in the 17th over. 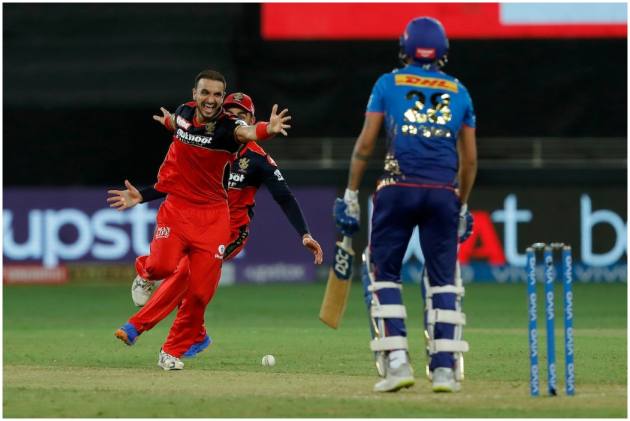 ‘Royal Challengers Bangalore pacer Harshal Patel is not losing his sleep over his failure to make the Indian team for the upcoming T20 World Cup, despite a consistent run in the ongoing IPL 2021. The seamer from Haryana has taken it in his stride.

“I don’t have any regret anytime, the decisions I have taken in life have been taken as per my best ability at that time. And when it comes to selection, that is completely out of my hand,” he said.

“There is only goal for me, whichever team I play, be it a club or IPL team, or when I will play for the country or when I play for Haryana, I try to put a positive impact in the game from whichever situation with ball or bat. That is my goal and it will remain my goal until I play cricket,” he stressed.

Harshal, after claiming a match-winning hattrick in their IPL match against Mumbai Indians, was short of words and said it will take time to sink in. Glenn Maxwell justified his million-dollar contract with an all-round performance before Harshal took three wickets in three balls to ensure a thumping 54-run victory for RCB here on Sunday.

“First-time ever in my life, literally in my life, I have never taken a hat-trick even in a school game. In the IPL, I have been on a hattrick almost, this was my sixth time on hattrick and this is the first time I have got it. So, absolutely, I don’t know, it is difficult to explain, but it will take some time to sink in," Harshal said at the post-match press conference.

He stressed that the RCB want to play the brand of cricket, which was on display against MI, consistently. “For me personally, I feel good, like I said in the pre-match interview as well, that I am (being) able to execute my skills pretty well," quipped the 30-year-old seamer.

According to Harshal, who has played 64 first-class games, his stock ball is the hard-length delivery. “But many times, the game dictates something else, like in Sharjah I try to bowl more slower balls, in Abu Dhabi when we had played, I had 80 per cent quick deliveries.

“So, I always let the situations dictate what I am going to bowl, rather than thinking that I am a fast bowler and I need to bowl (more) quicker or slower balls without getting into the game. My stock ball is the one which the situation dictates,” he explained.

He also said that the wicket of swashbuckling West Indies all-rounder Kieron Pollard was ‘very satisfactory’. “Because it was a bluff, because we had planned in the meeting, that a batsman like Pollard, can set up by bowling wide and then you can bowl a yorker at the heel, which he might miss.

“So, at that time, I felt that I (was) bowling the slower ball well and my square-leg was up, so rather than bowling a fast-paced yorker at its heel, I tried to ball a bit slow and that bowl was well bowled and he missed it,” he added.

According to Patel, he didn't expect such ‘a one-sided affair’ against the defending champions. Harshal, who is the purple cap holder for taking maximum wickets, said that he was feeling confident about his body and skill right now.

“Last three years have been a breakthrough for me because some people bloom late and I consider myself to be one of those people, I definitely bloomed late,” the 30-year-old said.

“I am at a place in my career right now that I am feeling very confident about my body, my skill and whatever situation I will be put in, I'll just try and make a positive impact and I know for a fact that I have the skills to do that,” he signed off.