Nicolas Nkoulou had looked to have handed Torino a precious win in the Turin derby but Weston McKennie and Leonardo Bonucci had other ideas. 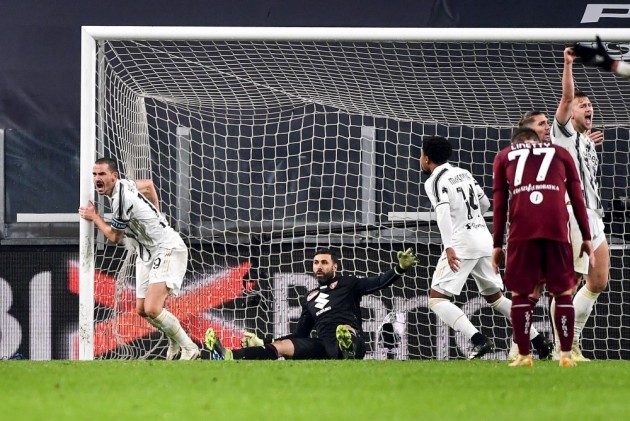 Juventus scored twice inside the final 13 minutes to secure a scarcely deserved 2-1 win over Torino in the Derby della Mole on Saturday. (More Football News)

Andrea Pirlo's men cruised past Dynamo Kiev 3-0 in the Champions League in midweek, but they were badly off the pace against a Torino side who had only won once in Serie A prior to their visit to the Allianz Stadium.

The visitors took a ninth-minute lead through Nicolas Nkoulou's first goal of the season and comfortably held Juve at bay for much of the match.

Champions Juve maintained their unbeaten start to the Serie A campaign, though, thanks to headed goals in the 77th and 89th minutes from Weston McKennie and Leonardo Bonucci respectively.

Juve started dismally and found themselves a goal down after nine minutes, Nkoulou half-volleying home from six yards after Cristian Ansaldi's corner had fallen kindly for him.

Wojciech Szczesny denied a clean through Simone Zaza soon after, while Lyanco flashed wide from distance shortly after the half-hour mark.

Matthijs de Ligt headed over from a free-kick at the other end as Juve ended a dire first half with just a solitary shot on target, Paulo Dybala tamely curling into Salvatore Sirigu's hands from outside the penalty area.

The hosts started the second half brightly and thought they had drawn level after 57 minutes, but Juan Cuadrado's deflected long-range effort was ruled out for offside against Bonucci.

Sirigu denied Federico Chiesa as the game entered the final 15 minutes, but he could do nothing about McKennie's first Juve goal moments later, the American rising highest to head home Cuadrado's cross from close range.

Cuadrado was the provider for Juve's dramatic late winner, too, the Colombian's ball in from the right powered past Sirigu by Bonucci to spark wild celebrations from the hosts, resulting in a red card for substitute Carlo Pinsoglio.

What does it mean? Juve leave it late again in the derby

It was not pretty from the champions but they had enough in the end to squeeze past Marco Giampaolo's spirited side.

Bonucci's header means they have now scored at least one goal after the 80th minute in each of their last seven matches against Torino at home.

The win moves them up to second, three points behind Milan, but Stefano Piloi's side, as well as the two sides they overtook - Inter and Sassuolo - are yet to play this weekend.

Cuadrado has yet to score this season but Juve will hardly care if he continues to lay on goals like he did here. The Colombian's sublime crosses were simply begging to be put away by McKennie and Bonucci, which they duly did. He also enjoyed more touches (107) than any player on the pitch, created four chances and completed the third highest number of passes (65) of any Juve player.

Kulusevski endures a game to forget

Any number of Juve players could have been the first to be hauled off but it was Dejan Kulusevski who suffered the ignominy. The Swede can hardly complain after failing to have any shots or make any key passes in his 57 minutes on the pitch.

- Juventus have won six of their last seven meetings with Torino, scoring an average of two goals a game in the process.
- This is the first time Juve have won a game after trailing by a goal in 33 Serie A outings since beating Atalanta in November 2019.
- Juventus have scored a goal after the 80th minute in their last seven home league meetings with Torino.
- Torino's return of six Serie A points after 10 matches is their lowest tally since 2002-03 (also six points) when they were relegated.
- Bonucci is one of two defenders to have scored two or more goals in the last eight seasons in the top five European leagues, along with Real Madrid's Sergio Ramos.
- McKennie is the first American to score for Juventus in Serie A and just the third American to score in the division for any team, following in the steps of Michael Bradley and Alexi Lalas.

Already-qualified Juve travel to Barcelona in the Champions League on Tuesday knowing only a big win will see them qualify for the last 16 as group winners. They then travel to Genoa in Serie A on Sunday, a day after Torino host Udinese.