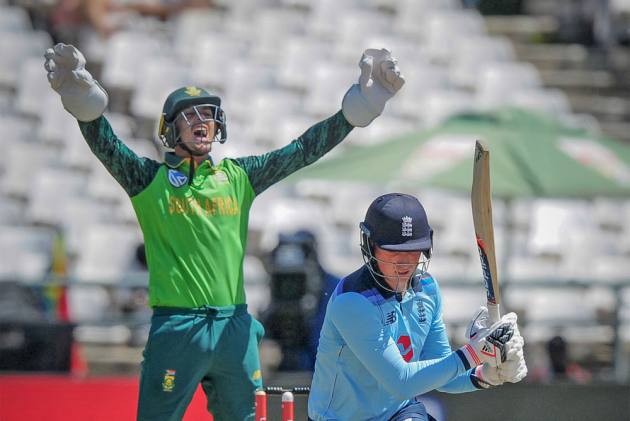 England's limited-overs tour of South Africa has been called off following the outbreak of COVID-19. The decision was reportedly taken on Monday after coronavirus hit both the camps. (More Cricket News)

The England and Wales Cricket Board (ECB) confirmed the tour was off "to ensure mental and physical health and welfare of players from both teams".

The ECB and CSA have agreed to postpone the remaining matches in the current men’s ODI Series.

ECB CEO Tom Harrison said: "We have always maintained that the welfare of our players and management is paramount.

"We were concerned about the potential impact that recent developments might have on the wellbeing of the touring party, and so after consultation with Cricket South Africa [CSA], we have jointly made the decision to postpone the remaining matches in this series, in the best interest of the players' welfare.

"I would like to thank Cricket South Africa for their support and understanding on this matter and look forward to working with them to identify a time when we can return to play these fixtures in the future."

CSA acting CEO Kugandrie Govender said: "The concern over the mental health impact of recent events on all involved is not one that we as CSA or the ECB take lightly, and the decision to postpone the tour is the most responsible and reasonable course of action for us.

"I would like to thank the ECB for the continued positive relations, and we look forward to hosting the England men's team in the near future."

Earlier, CSA had said that the second ODI match, which was scheduled for Monday (December 7) at Newlands, will now not take place.

"The decision has been taken by Cricket South Africa (CSA) and the England and Wales Cricket Board (ECB) whilst they await the outcome of the independent ratification of the two unconfirmed positive COVID-19 tests from the England camp and the continued health and wellbeing of both playing groups," Cricket South Africa said in its official release.

The three-match ODI series, which was due to begin in Cape Town on Friday was postponed when it emerged that a player from the home team returned positive for the dreaded virus.

The game was moved to Sunday. Then, canceled.

"Once the findings of this review have been received, CSA and ECB will then discuss how best to proceed concerning the remaining two matches of this ODI Series," the release further added.

On the day of the rescheduled first ODI, it emerged that the two of the England and Wales Cricket Board touring party have returned unconfirmed positive COVID-19 tests.

Reports further claimed that England are due to fly home on a chartered flight on Thursday.

The visitors had won the three-match T20I series 3-0.