On the anniversary of Roger Bannister's four-minute mile, a look at famous landmarks in sport, including those from Nadia Comaneci, Arsenal and Brian Lara 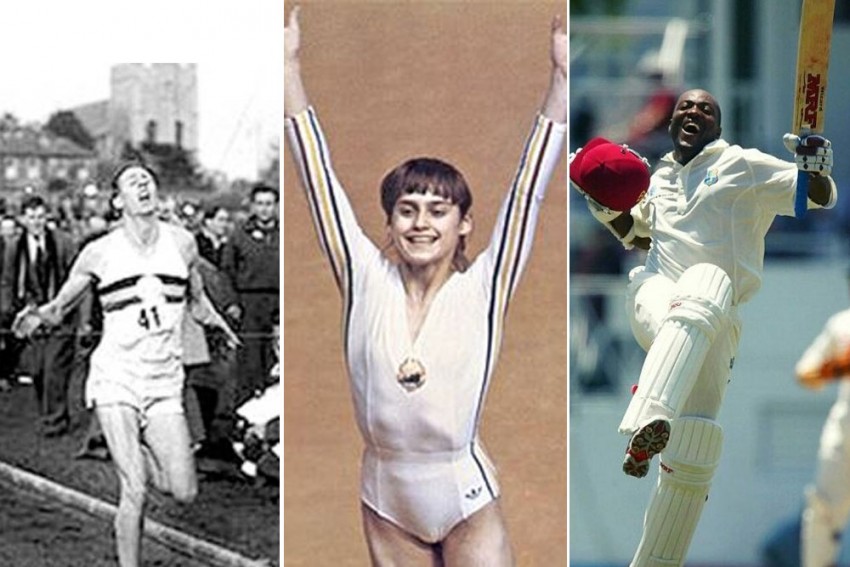 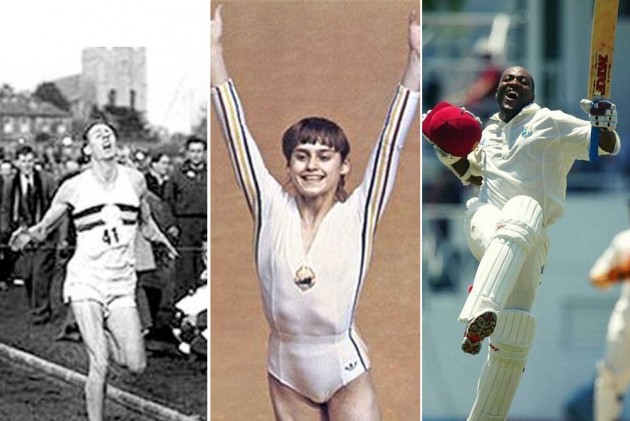 Although sporting records are always there to be broken, some best marks will forever hold a special place.

Here, we look at some of the competitors whose defining performances will continue to echo through the ages.

Helped by two pacemakers, Bannister thrilled crowds at Iffley Road, Oxford by clocking 3:59.4 for his four laps of the cinder track.

The record lasted only 46 days before Australia's John Landy shaved more than a second off Bannister's mark, while Morocco's Hicham El Guerrouj is the current men's mile record holder with 3:43.13. But Bannister's name will always be associated with the distance more than any other.

On this day 66yrs ago Sir Roger Bannister became the 1st man to run a mile in under 4 minutes at Iffley Road Track, Oxford, UK.

Elite stars at the top of their sports will often contend there is no such thing as perfection in competition, although the great Comaneci can always beg to differ.

As a 14-year-old at the 1976 Olympics, the Romanian superstar became the first gymnast to be awarded a perfect 10 for her performance on the uneven bars. She went on to achieve the same mark six more times in becoming the youngest all-around Olympic gold medallist.

Before the long jump final at the 1968 Olympic Games in Mexico City, no man had jumped beyond 28 feet. American favourite Beamon broke through that barrier and the 29-foot mark for good measure with a truly remarkable leap.

Beamon's 8.90 metres remained a world record until Mike Powell hit 8.95m during his titanic tussle with Carl Lewis at the 1991 World Championships.

Another United States track and field star to revel amid the altitude of Mexico City in 1968 was sprinter Hines.

He took gold in the 100m final with a time of 9.95 seconds, making him the first man to dip below 10 seconds without illegal wind assistance.

And yet, at the Maracana on November 19, 1969, the 29-year-old Pele slotted home a 78th-minute penalty for Santos against Vasco da Gama for his 1,000th career goal. Even allowing for Lionel Messi and Cristiano Ronaldo's phenomenal exploits, it is hard to envisage anyone ever matching the 'milesimo'.

Arsene Wenger invited widespread derision in 2002 when he suggested it was possible for his Arsenal team to go a whole Premier League campaign unbeaten. The season after, they did just that.

Preston North End had their own "Invincibles" back in 1888-89, although the First Division season was a mere 18 games long in those Victorian times. Formidable Manchester City and Liverpool sides falling short of Arsenal's unbeaten exploits in recent seasons have only underlined the scale of the achievement Wenger masterminded.

West Indies great Lara made the biggest individual score in Test history when he plundered a mammoth 375 versus England in 1994 – a record that stood until October 2003, when Australia opener Matthew Hayden hit a merciless 380 at Zimbabwe's expense.

Back at St John's against the same opponent as in his initial exploits, Lara took the record back into his ownership a mere 185 days after Hayden's heroics, bringing up 400 not out for the first quadruple century in cricket's longest format.

Golf's modern era is increasingly littered with players hitting hot streaks and low scores but going below 60 for a round still holds considerable allure.

It was a different time in 1977 when Geiberger became the first player to shoot 59 on the PGA Tour, illuminating the second round of the Memphis Classic at Colonial Country Club. No one managed the feat again on a major tour for 14 years.