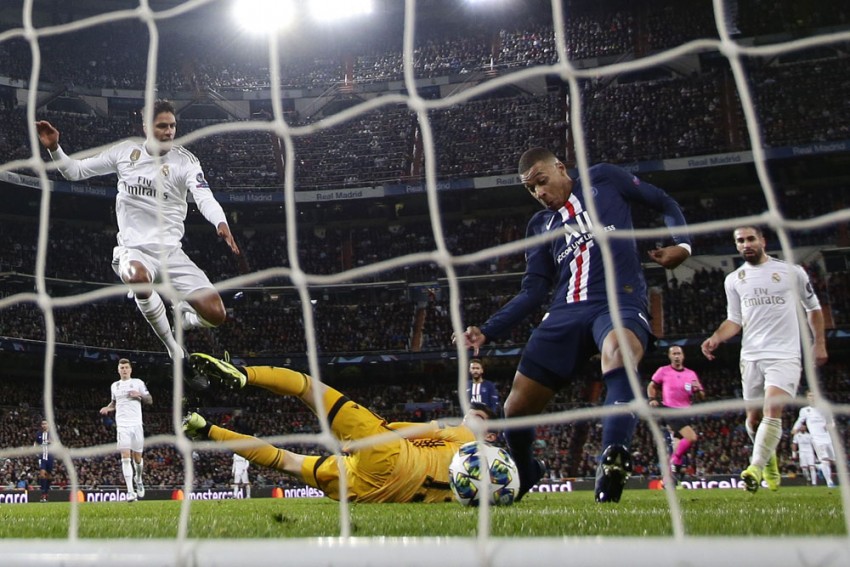 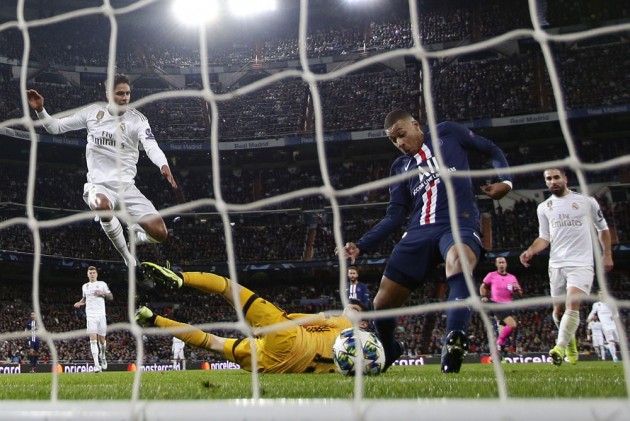 Kylian Mbappe and Pablo Sarabia struck late to steal a 2-2 draw for Paris Saint-Germain at Real Madrid in a pulsating Champions League encounter that ensures the Parisiens top Group A. (More Football News)

Madrid appeared certain to avenge a 3-0 loss from matchday one thanks to Karim Benzema's double and a contentious VAR decision that saw a red card for Thibaut Courtois overturned just before the break.

There was still time for Gareth Bale to hit the post with a stoppage-time free-kick as the Welshman came mightily close to silencing his critics.

It means PSG now cannot be caught at the top of the group, while Madrid – who lost the excellent Eden Hazard to injury with 21 minutes left – will lament wasting a host of glorious chances in a match they largely controlled, with their former goalkeeper Keylor Navas in fine form.

Madrid hit the front after 17 minutes thanks to a fine team move.

Hazard's break led to Federico Valverde and Dani Carvajal combining to feed Isco and, although his shot hit the left post, Benzema finished on the rebound.

Navas was busy against his former club, saving from Toni Kroos and Carvajal, but controversy reigned at the end of the half when Courtois was sent off for bringing down Mauro Icardi.

A VAR check to see if a penalty should have been awarded then went further back in the move and Idrissa Gueye was penalised for a shove on Marcelo, leading to the red being overturned.

PSG introduced Neymar at the break but Navas brilliantly denied Benzema and Isco to keep his side in it.

Hazard was helped off the pitch after a robust tackle from Belgium team-mate Thomas Meunier, but Madrid looked to have sewn things up when Benzema planted Marcelo's cross into the bottom-left corner.

More drama followed, though, as Mbappe tapped in with nine minutes remaining when Courtois and Raphael Varane failed to deal with Sarabia's cross.

PSG sensationally levelled two minutes later when Juan Bernat's deflected cross fell into the path of Sarabia, who thrashed home into the top-right corner from the edge of the box.

Rodrygo Goes and Varane missed golden opportunities for Madrid in a barnstorming finish that culminated in substitute Bale rattling the right post with a 30-yard free-kick.

It is a very good, resilient draw after a tough first half. A wonderful reaction from the Parisians #RMPSG

What does it mean? Madrid made to pay for profligacy

Madrid, who had qualified prior to kick-off following the draw between Galatasaray and Club Brugge, really ought to be in a position whereby top spot was still up for grabs heading into matchday six. But a mixture of wasteful finishing and great goalkeeping from Navas means PSG can no longer be caught.

There were several candidates for man of the match in a game blessed with quality and drama. Hazard made a slow start to life in the Spanis capital, partly due to injury, but has grown in stature and was full of running and invention before leaving the game prematurely. At the other end, Navas – who left the Bernabeu after playing second fiddle to Courtois – displayed his talent with several brilliant stops that ultimately kept PSG in the game.

Change in fortunes for Gueye

When PSG steamrollered Madrid 3-0 on matchday one, Gueye put in all-action display but it was a completely different story this time. Isco – handed a first start by Zidane since October 19 – together with Valverde and Casemiro, helped Madrid control the midfield battle in the first half and Gueye was hauled off at the break.

Madrid return to LaLiga action with a trip to Deportivo Alaves on Saturday and round out their Group A campaign at Club Brugge. PSG visit Monaco on Sunday and host Galatasaray on matchday six.