Harry Kane scored a second-half brace as Tottenham came back from two behind to beat Olympiacos 4-2, clinching a place in the next round 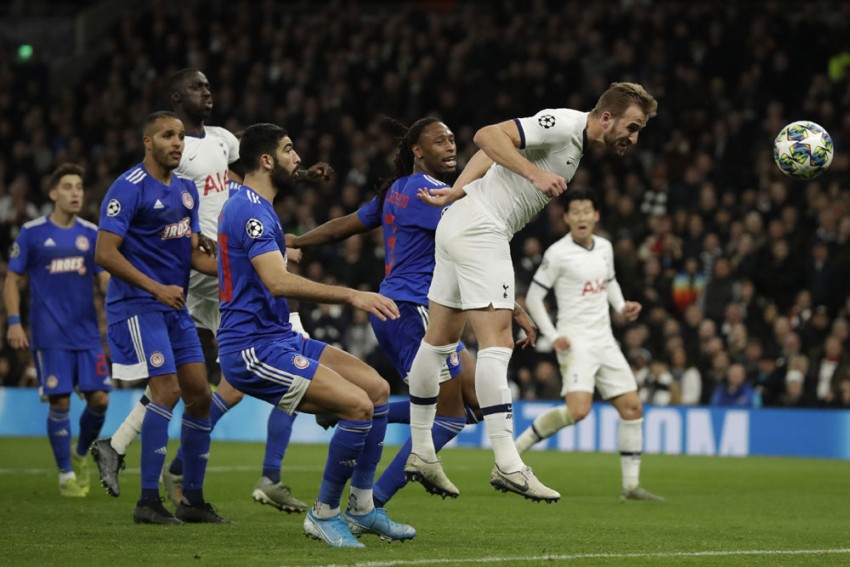 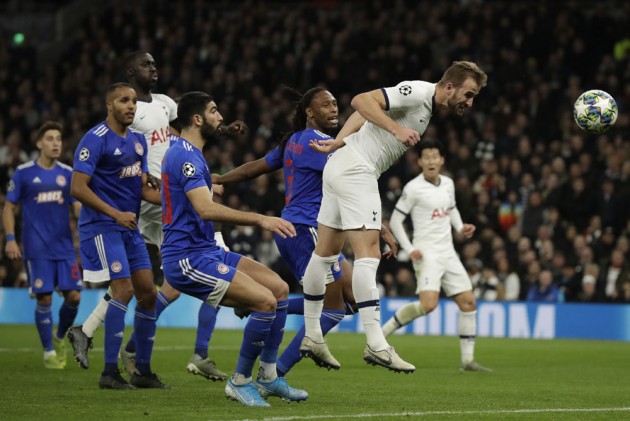 Tottenham battled back from 2-0 down to secure a 4-2 win over Olympiacos and book their place in the knockout phase of the Champions League, with Serge Aurier and Harry Kane seeing them over the line in the final 17 minutes. (More Football News)

Jose Mourinho's first European game and first home match at the Spurs helm began miserably but Dele Alli, Aurier and a Harry Kane brace saw them produce a blistering response and confirm a spot in the last 16 for last season's beaten finalists.

A brilliant start by Olympiacos left Spurs stunned as Youssef El-Arabi and Ruben Semedo had the visitors two up by the 19th minute, only for a defensive lapse to hand Spurs a way back through Alli's first Champions League goal in two years.

Kane restored parity early in the second half after some quick thinking from a ball boy, before Aurier blasted home to put Spurs ahead, their lead doubled as the captain got his second in the 77th minute.

Spurs were caught off guard by Olympiacos' intent during the early stages – El-Arabi typifying that mentality as he drove forward and lashed a fine strike into the bottom-left corner from 25 yards in the sixth minute.

Soon after it was 2-0 to Olympiacos – Semedo tapping in Guilherme's low delivery.

But Spurs were gifted a lifeline just before half-time, as Yassine Meriah haplessly missed Aurier's tame cross and Alli was on hand to capitalise.

A quickly taken Aurier throw-in released Lucas Moura and he teed up Kane for an easy finish to wipe out Olympiacos' lead four minutes into the second half, with Mourinho subsequently embracing the ball boy whose swift action allowed Spurs to catch the defence out of shape.

Victory looked assured for Spurs in the 73rd minute when Aurier hit a rasping half-volley into the left side of the net from close range.

What does it mean? Spurs into the pot

With Bayern Munich also sailing to victory, it would have taken a significant result to delay Spurs' passage to the next round. Luckily for them, Mourinho's men produced a spirited fightback to seal their progression.

It is fair to say Eriksen has become a focus of frustration among Spurs fans for his form in recent times, but he played an absolutely vital role in this victory, even if none of the goals were his. The Dane replaced Eric Dier after 29 minutes and went on to be the team's most creative player with three chances created, while he also laid on an assist for Kane's second.

One to forget for Meriah

Until Meriah's dreadful, inexcusable error, Olympiacos appeared to be more or less in control, with Spurs' attacks not causing them too much bother. He allowed them a way back and that was all the encouragement the hosts needed.

- Kane became the fastest player to score 20 Champions League goals, reaching the tally in just 24 appearances and breaking the record held by Alessandro Del Piero since 1998 (26 appearances).
- This was the first time ever a team managed by Mourinho had come from two goals down to win in a Champions League game – he had lost the previous 13 games he had been two or more goals behind in.
- Kane has scored 23 goals in 23 appearances for Tottenham and England this season.
- Alli ended a run of 16 Champions League games without a goal, scoring for the first time since November 2017 against Real Madrid. All four of Alli's goals in the competition have come at home.

Spurs look to resume their Premier League renaissance at home to Bournemouth on Saturday, with their next Champions League outing at Bayern Munich coming on December 11. Olympiacos' Group B campaign concludes at home to Red Star Belgrade following domestic clashes with PAOK and Panaitolikos.