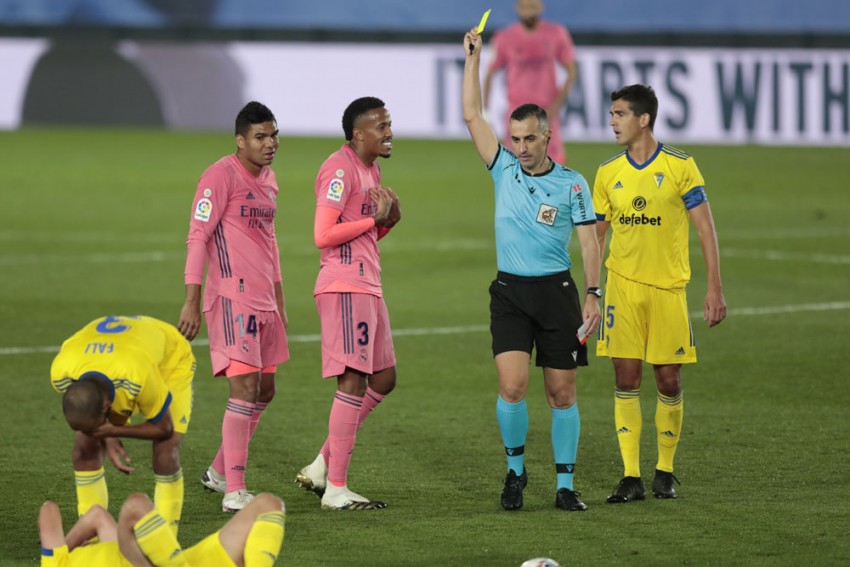 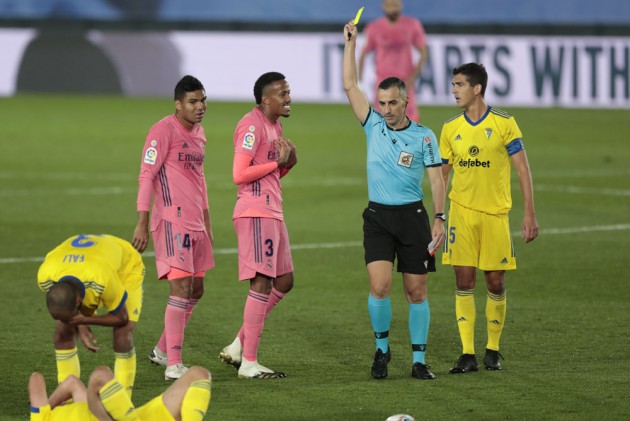 Real Madrid suffered their first LaLiga defeat of the season as they went down 1-0 in dismal fashion at home to minnows Cadiz on Saturday. (More Football News)

Promoted Cadiz set about disrupting the defending champions from the off and took a deserved lead through Anthony Lozano's 16th-minute effort.

Thibaut Courtois denied Lozano a second before half-time, when Zinedine Zidane made four substitutions with an injured Sergio Ramos among the players to make way.

Luka Jovic had a goal ruled out and Karim Benzema hit the crossbar, yet Madrid's sluggish play was not enough to overcome Cadiz's stubborn rearguard and maintain their winning run, as the Andalusian side held on for a famous triumph.

Prior to his injury, Ramos came to Madrid's rescue inside two minutes, hooking Alvaro Negredo's effort off the line.

Negredo went close with a header and Juan Cala tested Courtois with a shot as Cadiz kept up the pressure, though, and the visitors were rewarded for a brilliant start when Lozano prodded in over Madrid's onrushing goalkeeper.

Lozano looked set to double his tally just after the half-hour, but Courtois made a fine save at his near post, though Madrid's goalkeeper had a lucky escape when he dropped a cross which no Cadiz attacker could pounce on.

With four new players on, Madrid stepped up the tempo, though Vinicius' wayward strike was the closest they came to troubling Cadiz early in the second half.

Vinicius should have restored parity after the hour, only to head wide from Toni Kroos' left-wing cross, the Germany midfielder creating five chances as his team-mates struggled.

Jovic's introduction looked to have sparked the comeback, yet the substitute's goal was rightly disallowed for an offside from Benzema, who then struck the woodwork as Cadiz held firm to join Madrid and Granada on 10 points.

After beating Di Stefano's Real Madrid, they had to wait 29 years to beat them again (at the Alfredo di Stefano ).

What does it mean? Fifteen and out for toothless Madrid

Madrid had not lost in 15 LaLiga matches heading into this clash, but Cadiz did the damage to end Los Blancos' run and claim a first win over the capital club since 1991.

Negredo rolls back the years

Cadiz played with no fear in the first half, and a huge part of that was down to Negredo, who at 35 was a thorn in Madrid's side. It was his header which teed up Lozano – one of two chances the veteran campaigner created. Negredo also had four attempts as he posed a constant threat, tied for a game high.

Isco and Modric pay the price for dismal first-half display

Zidane made wholesale changes at the interval, with Luka Modric and Isco both making way. The normally creative duo managed just one key pass between them and were unusually sluggish in possession, losing the ball a combined 20 times in the first half.

All eyes will be on Madrid's response when Shakhtar Donetsk are their opponents in the Champions League on Wednesday, while Cadiz are next in action on October 25, when they face Villarreal in LaLiga.