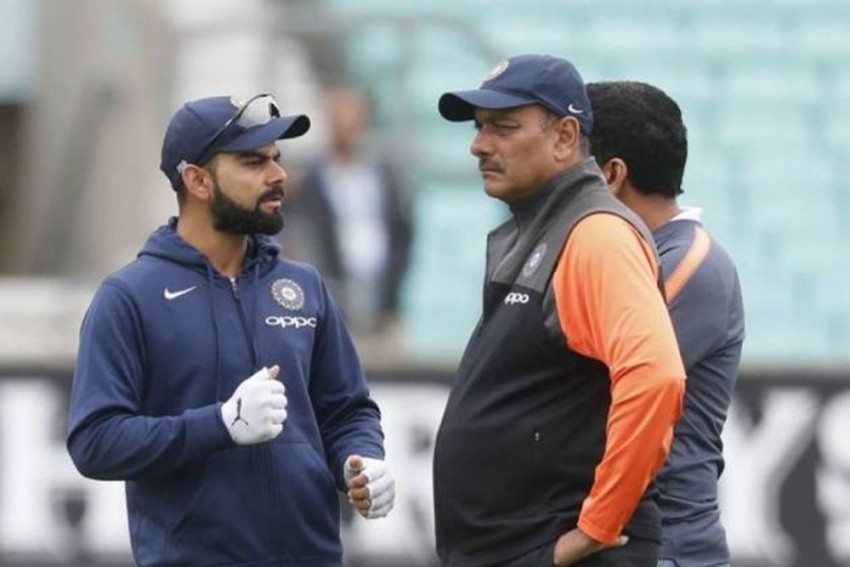 Ravi Shastri's record since his comeback in 2017 has been very impressive, having guided the Indian cricket team to its maiden Test series win on Australian soil last year.
Twitter
Outlook Web Bureau 2019-08-15T15:56:12+05:30 Ravi Shastri All Set For Another Stint As Indian Cricket Team's Head Coach 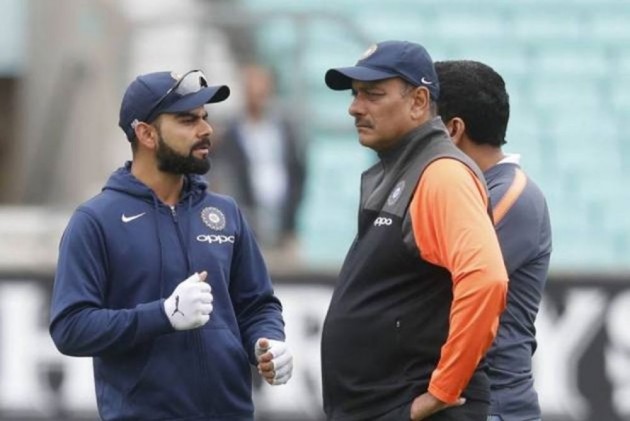 Apart from Shastri, the other big names who will give presentations to the three-member committee include former Australia all-rounder and Sri Lanka coach Tom Moody, along with ex-New Zealand and Kings XI Punjab coach Mike Hesson.

Shastri's record since his comeback in 2017 has been very impressive, having guided the team to its maiden Test series win on Australian soil last year.

ALSO READ: Sourav Ganguly As India Coach? Here's What 'Dada' Has To Say

The only blip could be the fact that in 2015 World Cup in Australia (when he was Team Director) and the last edition in UK, the team couldn't go beyond the semi-finals.

But the complete domination in the Caribbean, in both T20s and ODIs, indicates that he has been doing most of the things correctly.

With a very vocal and public backing from skipper Virat Kohli, it will be a major surprise if the 'Champion of Champions' is not back at the helm till the 2021 World T20 in India.

"Well, the CAC (Cricket Advisory Committee headed by Kapil Dev) has not contacted me on this. But all of us share a great camaraderie with Ravi bhai and would definitely be very happy (to have him around)," Kohli had said prior to his departure for the West Indies, making it clear where he stands on the issue.

Shastri, who has played 80 Tests and 150 ODIs, was contracted till the World Cup in England, but he was given a 45-day extension till the end of the ongoing West Indies tour, where the visitors have won both the T20 and ODI series.

Shastri's nearest competitor could be Hesson, considered one of the shrewdest coaches around and Moody, who has had a successful record as an IPL coach for Sunrisers Hyderabad.

Moody has appeared a couple of times for the coaches' interview but was not considered, and this time his task is even more uphill.

Rajput has also tried to get the coveted job multiple times and he might miss out again as Shastri's credentials are too strong to be ignored.

There could, however, be some debate over if Shastri will be able to retain his complete support staff. The interviews for batting, bowling and fielding coaches will be conducted by the selection committee headed by MSK Prasad.

The position for administrative manager -- Sunil Subramaniam's poor conduct has been criticised by one and all -- will also be up for grabs.

While Bharat Arun is all but certain to be retained as bowling coach having played his part in creating a potent pace attack, the same can't be said of former all-rounder Sanjay Bangar.

The only thing that can save Bangar is if Shastri, in his capacity, demand his own support staff.

Vikram Rathour is in running for the post with a fair amount of backing from one of the influential figures in Indian cricket's junior set-up. Unless things change drastically, Rathour remains the favourite to pip Bangar.

Incumbent R Sridhar is also ahead in the fielding coach's race even though he will be in direct competition with the legendary Jonty Rhodes, who has worked with Mumbai Indians.