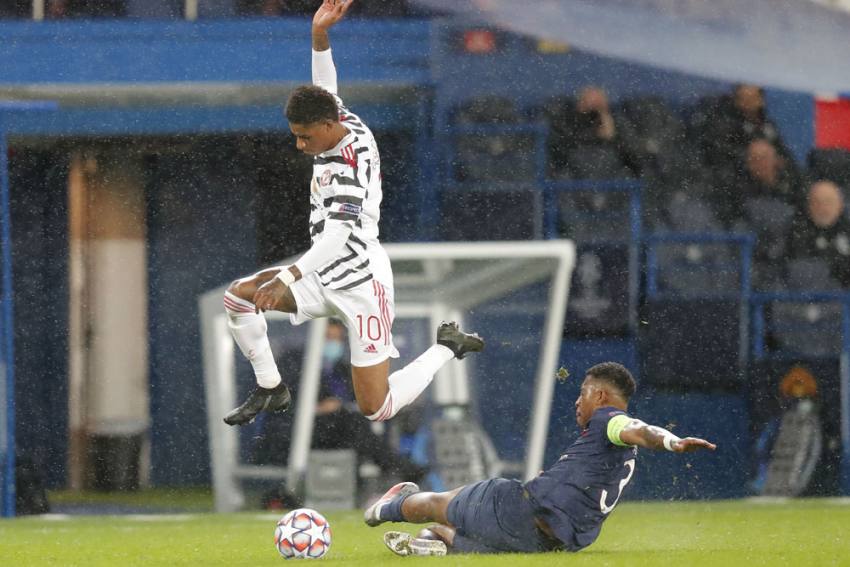 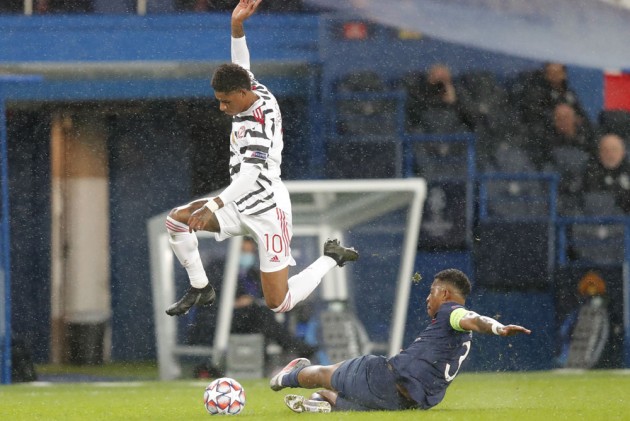 Marcus Rashford was Manchester United's hero at the Parc des Princes once more as his late strike secured a 2-1 victory over Paris Saint-Germain in Champions League Group H on Tuesday. (More Football News)

England international Rashford drilled home a stoppage-time penalty as United claimed a 3-1 win at PSG in the second leg of the last 16 in 2018-19, ensuring they progressed to the quarter-finals on away goalsm and he proved pivotal again.

Just as they did on that occasion, Ole Gunnar Solskjaer's men scored first. Bruno Fernandes tucked home a re-taken penalty after Keylor Navas stepped off his line to save the midfielder's first attempt.

Anthony Martial's own goal restored parity but Rashford returned to haunt PSG when he fired a fine finish into the bottom-left corner from the edge of the box with three minutes remaining.

David de Gea sprung to his right to keep Angel Di Maria at bay in the 12th minute and, from the resulting corner, only an instinctive block from the United goalkeeper stopped a stretching Layvin Kurzawa volleying home Kylian Mbappe's whipped cross.

United soon settled and Abdou Diallo's needless lunge on Martial gave Fernandes the chance to equalise from the spot, which he did at the second attempt.

Thomas Tuchel sent Moise Kean on and PSG were effectively playing in a 4-2-4 but, after De Gea denied Mbappe brilliantly and Kurzawa hit the bar with a cross, it was Martial's own goal that levelled matters.

Navas tipped a low drive from Rashford wide in the 69th minute and he kept out the United attacker again with 10 minutes remaining.

However, Rashford succeeded at the third attempt as his powerful low drive went in off the base of the post and United secured a deserved victory.

What does it mean? Solskjaer decisions pay off

United started with a back three and despite some early pressure they defended resolutely, limiting PSG to five shots on target – every one of which was saved by De Gea. After Martial gifted the hosts an equaliser, Solskjaer changed tact by sending Paul Pogba on for debutant Alex Telles and his team soon threatened regularly on the break.

With Rashford's winner, they became the first team to beat PSG at home more than once in the Champions League and handed last season's runners-up their first defeat in 25 group games in the competition at the Parc des Princes

PSG left themselves exposed at the back by committing plenty of numbers forward but, despite being regularly put into promising situations, Rashford's execution was lacking – he only completed 13 passes in the opposition half. However, he did not let it burden him and was eventually rewarded.

Tuchel decided not to play Neymar in the Ligue 1 meeting with Nimes last Friday to give the forward a rest after the international break, but he failed to have a meaningful impact against United. He only had two touches in the opposition box and did not hit the target until the 83rd minute, while he only created one chance for a team-mate.

- Manchester United have scored nine own-goals in the Champions League, more than any other side. Martial is the second French player to an own-goal in the Champions League against French opposition, after Jeremy Mathieu for Barcelona versus PSG in April 2015.
- Since the start of last season, United have been awarded 27 penalties in all competitions, scoring 22 of them, both highs among sides in Europe’s big five leagues in that time. Fernandes' 11 converted from 12 since his debut in February also marks a continental high.
- During that period, Fernandes has been directly involved in more goals in all competitions than any other Premier League player with 27 (16 goals, 11 assists).
- Neymar has failed to score in four consecutive Champions League appearances for the first time since November 2013 -  his first five games in the competition.

United have a Premier League meeting with Chelsea at Old Trafford on Saturday, when PSG entertain Dijon in Ligue 1.