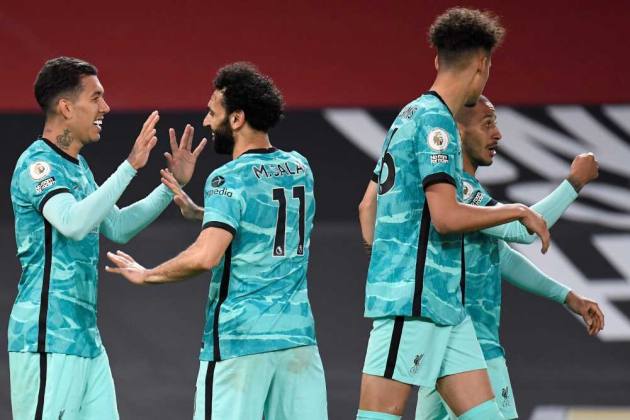 Liverpool provided a huge boost to their hopes of Champions League football next season as they claimed a thrilling 4-2 win over rivals Manchester United. (More Football News)

Ole Gunnar Solskjaer's side took the lead early through Bruno Fernandes, but were pegged back before half-time as Diogo Jota and Roberto Firmino got on the scoresheet.

It looked like the visitors had things wrapped up early in the second period as Firmino headed in his second only for Marcus Rashford to set up a nervy finish as he pulled one back with 20 minutes remaining.

But the visitors rounded things off late on through Mohamed Salah to put pressure firmly back on Chelsea and Leicester City in the chase for top four.

2 - Mo Salah is only the second player in Liverpool's history to score away to Man Utd in two different games in a season, after Harry Chambers in 1920-21. Crucial. #MUNLIV pic.twitter.com/M9iRUtjcvs

Liverpool saw penalty claims for handball against Eric Bailly waved away, while Edinson Cavani shot wide from a wayward Alisson pass in a busy opening.

It was United who struck first, Fernandes afforded plenty of space to curl the ball in off Nathaniel Phillips.

Bailly had another escape when VAR showed he made a clean tackle on Phillips after referee Anthony Taylor had initially pointed for a Liverpool penalty.

The visitors were level, though, when Phillips collected the ball from a corner and made space for a shot that Jota expertly diverted home.

Liverpool then deservedly went in front on the stroke of half-time when Firmino headed home Trent Alexander-Arnold's free-kick at the back post.

And they doubled their lead less than a minute after the restart as Dean Henderson spilled an Alexander-Arnold shot to hand Firmino a simple close-range finish.

The visitors could have wrapped it up by the hour mark, with Jota cracking the post and Alexander-Arnold shooting at Henderson from similar positions inside the box in quick succession.

It looked like they would rue that miss when Rashford slightly scuffed a finish home after a brilliantly slick interchange between United's forwards.

But United could not turn their dominance of the final 20 minutes into a goal that would have denied their rivals a first Old Trafford win since 2014, which was wrapped up in the final minute of normal time by a cool Salah finish.

What does it mean? Reds back in hunt for fourth

Chelsea's defeat to Arsenal on Wednesday meant Liverpool headed to Old Trafford knowing that four wins from their last four games would guarantee them a place in the Champions League next season.

They now have one of those victories and, with West Brom, Burnley and Crystal Palace to come, will fancy their chances of leapfrogging either Chelsea or Leicester City in the run-in.

With England boss Gareth Southgate watching on, Alexander-Arnold showed why there was plenty of bemusement at the decision to omit him from the last Three Lions squad.

His five key passes were more than any player on either side managed, he also clocked up an assist for Firmino's header and took the shot that led to the Brazilian's second.

But the hosts quite clearly were not as well organised at the back without their vocal defensive leader, whose absence was felt in a disjointed performance from the back four.

- This was Liverpool's first Premier League win at Old Trafford since March 2014, while it was manager Jürgen Klopp’s first ever away win against Manchester United with the club.
- Manchester United have lost two home games in the space of three days for the first time since April 1958.
- The Red Devils conceded 27 home goals in the Premier League this season, their most in a single league campaign since 1969-70 (also 27).
- In his 200th appearance for Liverpool in all competitions, Mohamed Salah netted his 124th goal for the Reds – only Roger Hunt (133) and Gordon Hodgson (125) scored more for the club in their first 200 games.
- Marcus Rashford has scored five goals in his last five appearances against Liverpool, with tonight’s strike his 50th at Old Trafford in all competitions for Manchester United.

Both teams face already relegated opposition next, with Liverpool heading to West Brom on Sunday and Manchester United hosting Fulham next Tuesday.