If Merseyside rivals Everton failed to beat Aston Villa in the late kick-off, Jurgen Klopp's Liverpool will retire the night as sole leaders in England. 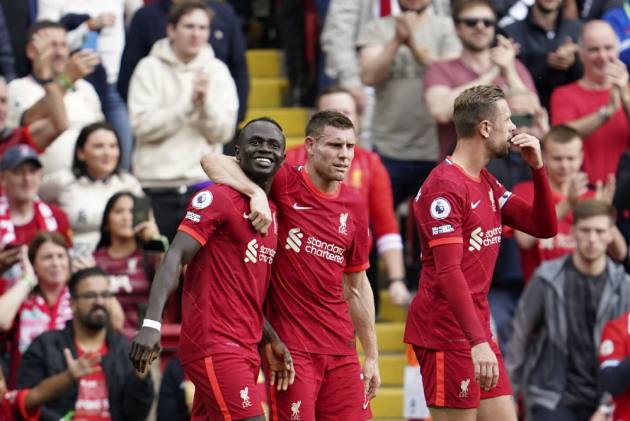 At Anfield, Sadio Mane scored for the ninth straight time against Crystal Palace and reached 100 goals for Liverpool to set his team on their way to a 3-0 win. Senegal forward got to the milestone by converting from close range in the 43rd minute after Mohamed Salah's header from a corner was parried out by Palace goalkeeper Vicente Guaita. Of Mane's century of goals for the Reds, which have come in 224 games, 10 have been scored against Palace.

Salah added the second in the 78th and that also came from a corner, with the Egypt international volleying in after a delivery from the left was deflected to him at the back post. Naby Keita scored the best of the lot in the 89th minute with a volley from the edge of the area after the ball was punched clear by Guaita.

Liverpool have won four of their five games in the league and conceded only once, their improved defensive showings coinciding with the return from injury of center back Virgil van Dijk.

Palace hit the post inside the opening two minutes through Wilfried Zaha, and Liverpool goalkeeper Alisson Becker was also called upon to make saves against Conor Gallagher and substitute Odsonne Edouard shortly before Salah struck his fourth league goal of the season.

If Merseyside rivals Everton failed to beat Aston Villa in the late kick-off, Jurgen Klopp's Reds will retire the night as sole leaders. Of course, Manchester United and Chelsea have their chances to catch up.

But dominant City once again dropped points as a near-capacity crowd failed to inspire the champions. Guardiola's team might even have felt relieved to claim a point after referee Jon Moss overturned decisions to award Southampton a penalty and send Kyle Walker off in the second half. They have three wins, one draw and a defeat from five outings.

At Turf Moor, Arsenal registered a hard-fought 1-0 win over Burnley with a brilliant Martin Odegaard freekick at the half-hour mark settling the issue. Gunners then survived an Anthony Taylor penalty call with VAR overturning the referee's call in the second half after Ben White's back pass forced Aaron Ramsdale to some desperate defending against Matej Vydra.

The win helped Mikel Arteta's struggling Arsenal move to 12th in the table with two wins from five matches.

At Carrow Road, Norwich suffered their fifth defeat of the season as Ismaila Sarr brace helped Watford take all three points. Emmanuel Bonaventure gave the visitors a 17th-minute lead, but Teemu Pukki made it 1-1 at the 35th minute. Then Sarr showed his class.

The win, second in five, helped Watford moved to 10th while Norwich remained at the bottom with a -12 goal difference.