City host Dortmund in the first leg of their Champions League quarter-final on Tuesday, with Haaland unsurprisingly one of the main topics of conversation.

The Norway star has been in lethal form ever since joining Dortmund in January 2020 and boasts a remarkable haul of 10 goals in six Champions League outings this term, including two in each of their meetings with Sevilla in the last round as the German's narrowly progressed 5-4 on aggregate.

Since then, reports linking Haaland with Europe's biggest clubs have been frequent, as Barcelona and Real Madrid seemingly positioned themselves as interested parties following meetings with his agent Mino Raiola.

While City – whom his father Alf-Inge Haaland played for – have been rather more coy on the matter, few strikers have been focused on as much as Haaland with respect to potential replacements for Sergio Aguero following last week's announcement of his end-of-season departure.

After all, in the spell since Haaland scored a 23-minute hat-trick on his Dortmund debut, his 49 goals across all competitions has been bettered by only Robert Lewandowski (67) and Cristiano Ronaldo (52) among players in the top five leagues. City's leading scorers in the same period are Raheem Sterling (24) and Gabriel Jesus (22).

Guardiola appreciates Haaland is a fine talent, though he would not be lured into making any grand statements about a potential future for him at City.

When asked if Haaland was the sort of player who could command a transfer few of over £100million, Guardiola said: "I don't know, it's a question for Dortmund, his agent.

"I understand completely why people ask about Haaland, of course he's an exceptional striker, but it's not appropriate for me to talk about a player for another club.

"All I can say is he's an exceptional striker. The numbers speak for themselves. A fantastic player, that's all." 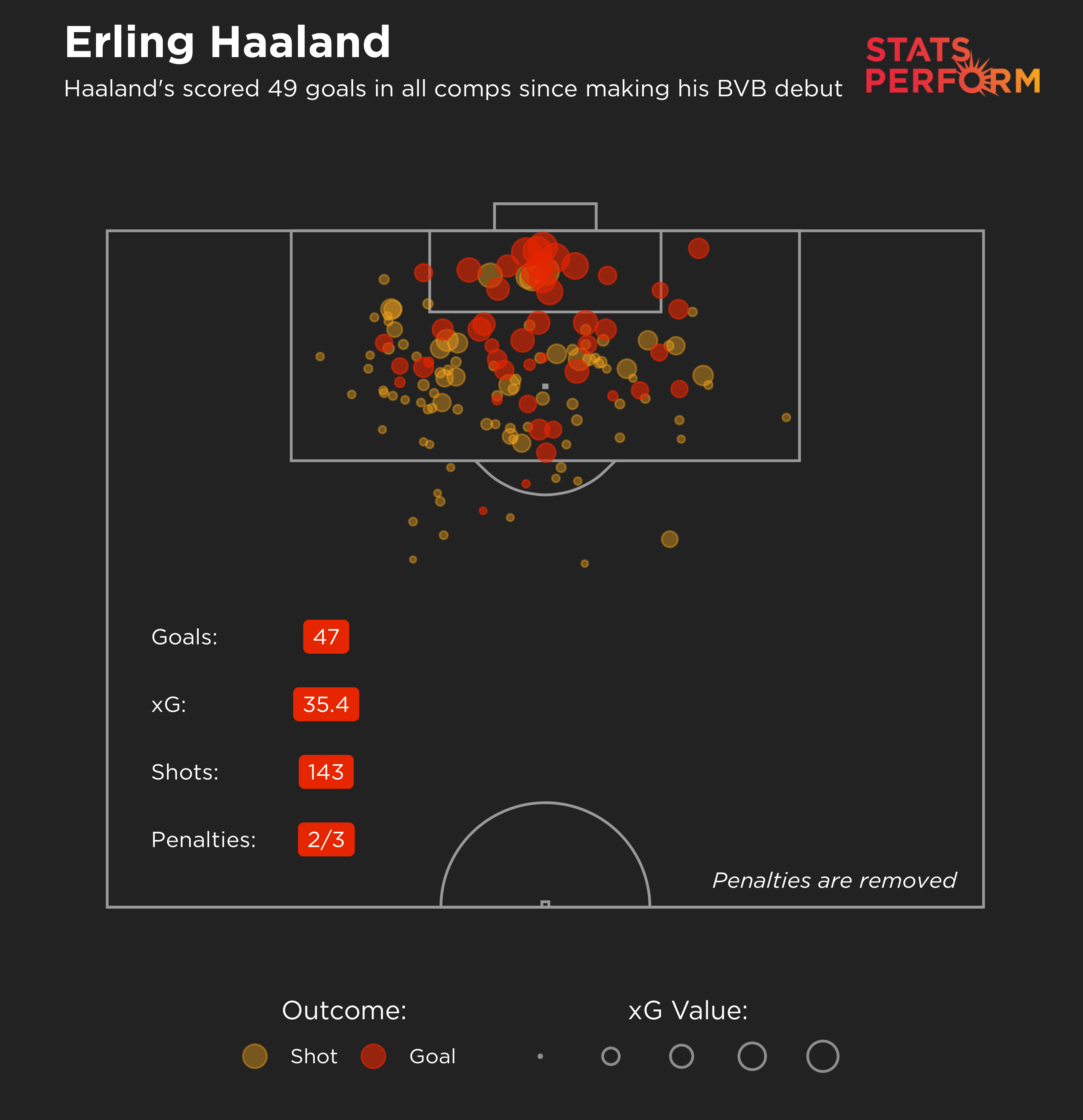 On those "numbers", Guardiola was pressed for an opinion on how City might be able to stop Haaland, given his conversion rate of 33.6 per cent is better than any other player in the top five leagues with 20 goals or more since his Dortmund bow.

For comparison, Bayern Munich's Lewandowski – widely regarded as the best striker around – has converted 27.8 per cent of his chances over the same period.

"The striker who scores goals, they are going to score when they are in our box," Guardiola continued. "If they're far away from our box, they have fewer chances. It's a question of mathematics.

"Not just Haaland. [Jamie] Vardy, [Sadio] Mane, Aguero, all the strikers, they want to be there [in the box] as much as possible. This is the best way is to avoid [conceding].

"In that age to score that amount of goals is not easy to find in the past, honestly, so I think he's 20 – the numbers speak for themselves.

"He can score right [foot], left, on the counter-attack, in the box when you dominate, headers. He's a fantastic striker, everyone knows it.

"A blind guy could realise he's a great striker. It is not necessary to be a manager to realise that."

Keeping Haaland quiet will surely go a long way to ensuring City finally get past the quarter-finals, having been knocked out at this stage in each of the past three seasons, losing four of their five games at this point.