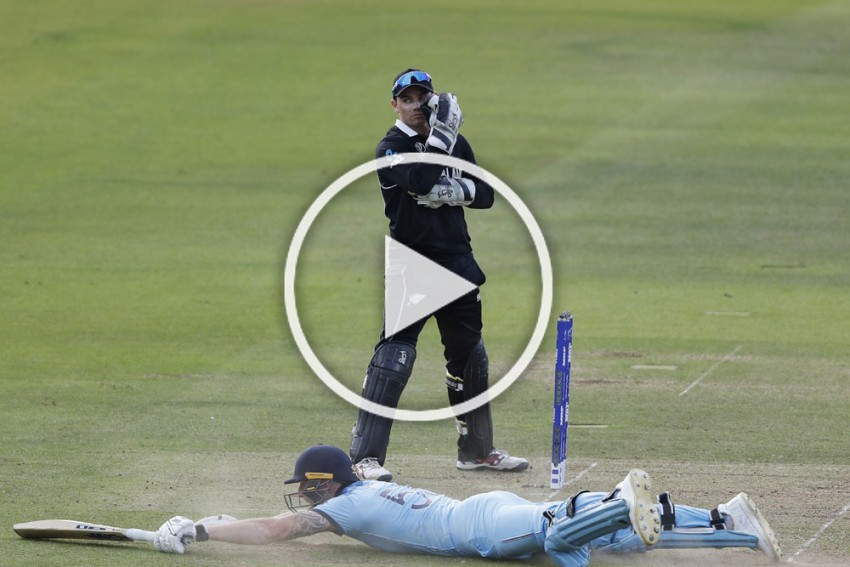 England's Ben Stokes dives in to make his ground and get a 6 from overthrows during the Cricket World Cup final match between England and New Zealand at Lord's cricket ground in London on July 14, 2019.
AP Photo
Outlook Web Bureau July 14, 2019 00:00 IST NZ Vs ENG: Mayhem At Lord's As New Zealand, England Produce First Ever Super Over In ICC Cricket World Cup History – WATCH 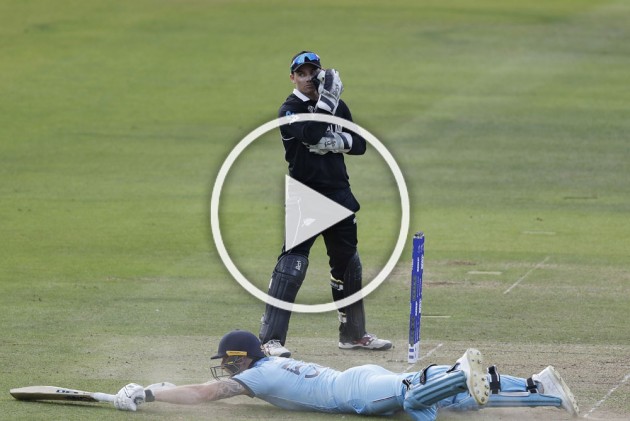 The ICC Cricket World Cup 2019 final between New Zealand and England sensationally went down to a Super Over after a remarkable conclusion to the hosts' run-chase at Lord's, London on Sunday.

Chasing 242 for victory, England required 15 from the final over and three off the last two balls after two sixes from Ben Stokes, the second courtesy of an extraordinary turn of events that saw the batsman dive to make a second run and inadvertently divert the ball over the rope for four more.

Ben Stokes and Jofra Archer were the heroes as England finally claimed their maiden Cricket World Cup title in the most remarkable fashion imaginable, defeating New Zealand courtesy of a higher boundary count following a Super Over.

The final act saw Martin Guptill needing to hit two runs off Archer, the Barbados-born paceman who only qualified for England in March, but the Black Caps opener was run out coming back for a second from the final delivery, unable to beat Jason Roy's accurate throw from deep midwicket.

England, who hit 24 boundaries in their 50 overs compared to New Zealand's 16, were therefore able to celebrate a first final victory at the fourth attempt, with Stokes having played a key role in both their initial run chase and the Super Over to exorcise the demons of his last-over misery at the hands of Carlos Brathwaite in the 2016 World Twenty20 final showpiece against West Indies.

Watch the final ball of the regular play here:

The most incredible finals for a viewer. Super-over #EngvsNZ pic.twitter.com/c2krTTsQbn

The drama was not over there, however, as Adil Rashid and Mark Wood were each run out at the non-striker's end to ensure Stokes (84 not out off 98 balls) could only pinch singles from each of Trent Boult's final deliveries.

Who bats?! Who bowls?! WOW. Does this game just HAVE IT ALL? #CWC19  #ENGvNZ #BACKTHEBLACKCAPS pic.twitter.com/1TkEAI2fIj

That meant England finished on 241 all out, matching New Zealand's total of 241-8. As a result, a one-over shootout was required to decide which team would win their first World Cup final.

This is the first time that a World Cup match is decided on Super Over.