Russell Westbrook led the Washington Wizards to an overtime win against the Toronto Raptors in the NBA, while the Dallas Mavericks topped the Brooklyn Nets. 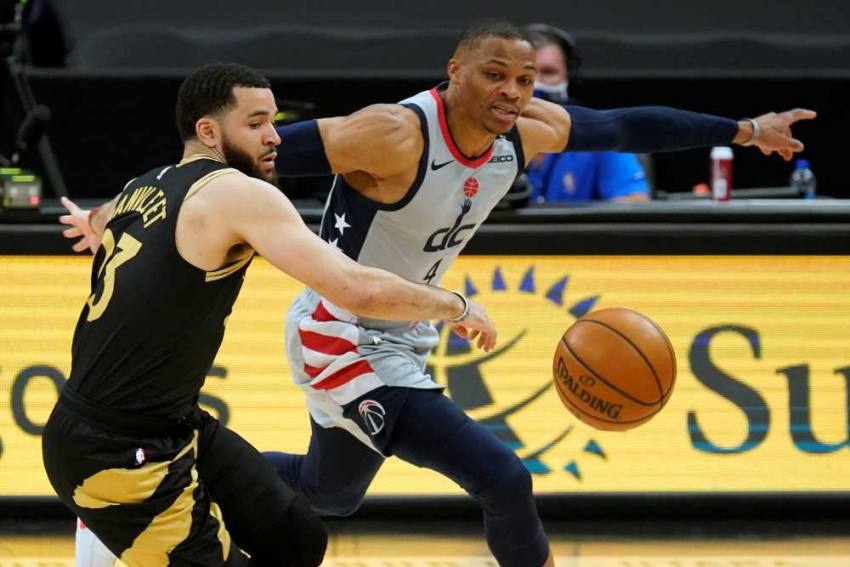 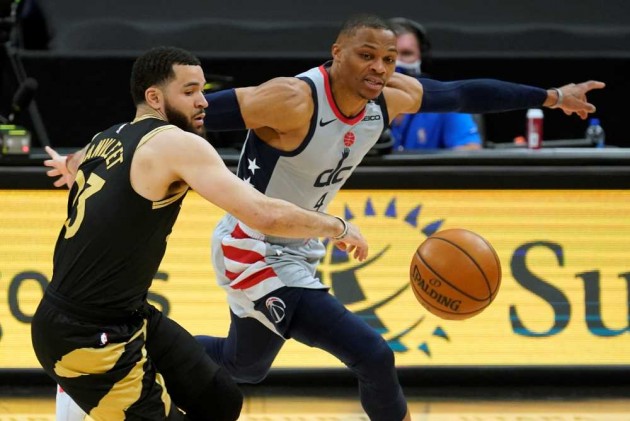 Russell Westbrook took another giant step towards an NBA record after teaming up with Bradley Beal to help the Washington Wizards push the Toronto Raptors to the verge of elimination from a spot the NBA play-in tournament with a 131-129 win in overtime.  (More Sports News)

Westbrook posted 13 points, 17 rebounds and 17 assists for his 180th career triple-double, leaving him one shy of equalling Hall of Famer Oscar Robertson's all-time record on Thursday.

Former MVP Westbrook because the first player with three consecutive 17-plus assist games since Steve Nash in 2007.

Wizards star Beal scored half of his 28 points in the fourth quarter and overtime as Washington outlasted Toronto.

Raul Neto added a career-high 25 points and Robin Lopez had a season-best 24 for the Wizards (31-36), who hold a four-game lead over the Raptors (27-40) for the final play-in spot with five games remaining for both teams.

Pascal Siakam matched his career best with 44 points, 11 rebounds and seven assists but missed a three-point attempt at the buzzer in overtime that would have won it for Toronto.

Siakam joined Kawhi Leonard and Vince Carter as the only players with a 40-point, 10-rebound and five-assist game in franchise history.

Fred VanVleet sent the game to OT by hitting a shot from beyond the arc with 1.3 seconds to go in the fourth quarter. He finished with 22 and Gary Trent Jr. contributed 25 for Toronto.

He was double-teamed and face-guarded all night, but Beal came through with 28 points, five rebounds, and five assists in our OT win! #WizRaptors | @RealDealBeal23 pic.twitter.com/DqNq7YiPb0

Luka Doncic finished with 24 points and Tim Hardaway Jr. had 23 of his own as the Dallas Mavericks downed the slumping Brooklyn Nets 113-109, despite 45 points from Kyrie Irving.

The Indiana Pacers inched closer to securing a spot in the play-in tournament with a 133-126 win over the Atlanta Hawks as Caris LeVert led the way with 31 points and Domantas Sabonis added 30 on 12-for-14 shooting from the field. Trae Young's double-double of 30 points and 10 assists was not enough for the Hawks.

Stephen Curry and the Golden State Warriors rolled to a 118-87 victory at home to the Oklahoma City Thunder (21-46). Curry scored 34 points. The two-time MVP has now scored at least 30 points 18 times in his last 20 games (35th time this season).

LaMelo off target against Bulls

A day after his primary competitor for NBA Rookie of the Year, Anthony Edwards of the Minnesota Timberwolves, dropped 42 points, LaMelo Ball made only one of 10 shots from the field and scored just four points in the Charlotte Hornets' 120-99 loss to the Chicago Bulls. Ball had reached double digits in his previous three games after returning from a wrist injury.

Caldwell-Pope strong to the hoop

Lakers fans did not have much to celebrate in Thursday's blowout loss to the Clippers, but Kentavious Caldwell-Pope did provide one highlight with this slam in Ivica Zubac's face.

KCP to the rim, with purpose.

Zion Williamson and the New Orleans Pelicans (30-36) are just outside the cut for the play-in tournament and will face imposing opposition on Friday as they attempt to gain ground in the form of the Philadelphia 76ers (45-21), winners of six in a row.