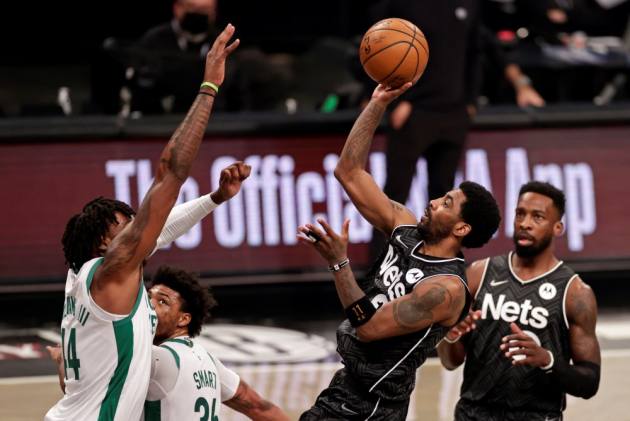 In the team's first game back since the NBA All-Star break, Irving – who left the Celtics in 2019 – starred as the Nets recorded their 12th win in 13 outings.

Former MVP James Harden had 22 points and 10 rebounds on Thursday, in the absence of star team-mate Kevin Durant (hamstring) and recruit Blake Griffin.

The Celtics were fuelled by Jayson Tatum's 31 points, but still had their four-game winning streak snapped.

Antetokounmpo – named All-Star Game MVP after starring for Team LeBron in Atlanta on Sunday – continued where he left off for the Bucks.

He had 24 points, 10 rebounds and 10 assists in 29 minutes for his fifth triple-double of the season.

Bucks team-mate Bryn Forbes (21 points) nailed the most threes without missing in Bucks history after going seven of seven from beyond the arc.

Trae Young put up 37 points as the Atlanta Hawks topped the Toronto Raptors 121-120. Atlanta trailed by 15-plus points in the fourth quarter in each of their last two games but came back to win both. According to Stats Perform, they are the only team in the past 15 years to overcome a 15-plus point fourth-quarter deficit to win back-to-back games. Norman Powell's 33 points and double-doubles from Kyle Lowry (17 points and 12 assists) and Aron Baynes (11 points and 15 rebounds) were not enough for the Raptors.

The @ATLHawks trailed by 15+ points in the 4th quarter in each of their last two games, but came back to win both.

They're the only NBA team in the last 15 years to overcome a 15+ point 4th-quarter deficit to win in back-to-back games.

The Miami Heat defeated the Orlando Magic 111-103 behind Jimmy Butler's 27 points and 11 assists. All-Star Nikola Vucevic's double-double of 24 points and 17 rebounds was not enough for the Magic.

No Joel Embiid and Ben Simmons? No worries for the Eastern Conference-leading Philadelphia 76ers. Tobias Harris scored 24 points to lift the 76ers to a third consecutive win – a 127-105 success against the Chicago Bulls.

Devin Booker's 35 points inspired the Phoenix Suns to a 127-121 victory against the Portland Trail Blazers, who had 30 points from All-Star Damian Lillard.

The Charlotte Hornets beat the Detroit Pistons 105-102, but it was a rough night for rookie LaMelo Ball. In 29 minutes, Ball made just three of 11 from the field and nailed only one of five three-point attempts for seven points.

Stephen Curry won the All-Star Three-Point Contest, but he was far from convincing in the Golden State Warriors' 130-104 loss to the Los Angeles Clippers. He made just one of eight three-pointers, finishing with 14 points on six-of-16 shooting.

Snell with the buzzer-beating three

With the Hawks trailing 120-118, Tony Snell called game after sinking a three as time expired.