Liverpool's stuttering title defence suffered a further blow as they were beaten 1-0 at home by struggling Burnley. 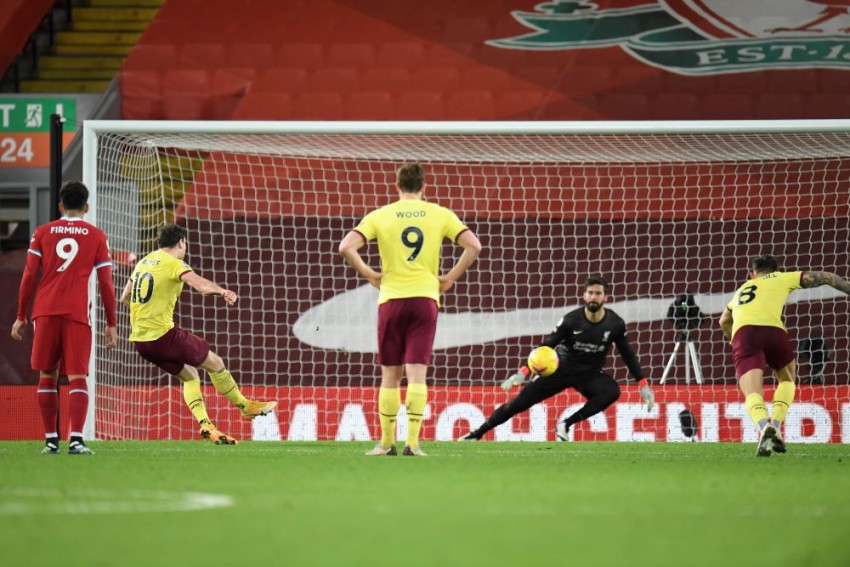 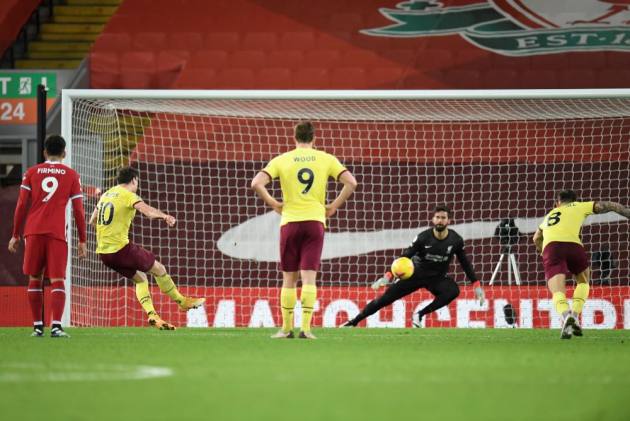 Having been fouled by Alisson for the spot kick, Barnes fired home from 12 yards to secure his side a 1-0 win and three welcome - if unexpected - points that move them away from the relegation zone.

Defeat means Liverpool remain six points behind leaders Manchester United in the table, the stuttering champions enduring a fourth successive league game without a goal despite having 27 attempts.

Divock Origi hit the crossbar in the first half while Nick Pope - who starred when Burnley end the Reds' 100 per cent home record in their title-winning campaign - was outstanding in the visiting goal, helping secure a stunning result that has ramifications at both ends of the table.

1 - This was Liverpool’s first defeat in 69 Premier League games at Anfield (W55 D13) since losing 1-2 to Crystal Palace in April 2017. It was the second-longest unbeaten home run in English top-flight history, after Chelsea’s 86 games ending in October 2008. Smash. pic.twitter.com/aym7hcTcpF

Liverpool's first Anfield loss in 69 league games will give Jurgen Klopp further cause for concern, particularly as their problems in front of goal persist.

Origi wasted a glorious chance to end the drought having been surprisingly picked in the XI, with only Sadio Mane remaining in the frontline that started the 0-0 draw with rivals United at the weekend.

The Belgian capitalised on a Ben Mee error to get a clean run through on goal, only to see his rising shot hit the underside of the bar and stay out.

Mohamed Salah and Roberto Firmino were summoned from the bench before the hour to try to find a breakthrough, the former seeing a low drive denied from sneaking in by Pope's outstretched arm.

As the hosts seemingly ran out of ideas in attack, Burnley were presented with the chance to secure a famous victory.

Fabinho allowed a loose ball to run through but Barnes beat the onrushing Alisson to get a touch, leading to a collision. The striker duly converted for his 100th career goal, with Liverpool unable to respond before the final whistle.

What does it mean? Red-letter day in title race

Liverpool looked to be hitting their stride when they thrashed Crystal Palace 7-0 at Selhurst Park on December 19. However, they have managed just one goal and three points since, an alarming dip that leaves them looking over their shoulders, rather than trying to making up ground on the leaders.

They huffed and puffed without every threatening to blow resolute Burnley away, sending in numerous crosses – Trent Alexander-Arnold had 19 alone from open play – while looking a shadow of the side that ran away with the title last season.

Praise to Pope as Barnes hits the spot

Pope seemingly enjoys a trip to Anfield; he made six saves and was superb dealing with aerial balls into his penalty area, including one late claim deep into added time that made sure of the result for his team.

Barnes, meanwhile, had given Liverpool a warning in the first half, Alisson denying him on that occasion after he had seized on a loose ball. When it came to the penalty, however, there was no stopping his strike.

Origi unable to take his chance

Making his first league start of the campaign, Origi had four of Liverpool's 13 shots in the first half - he had only managed more once in a full game in the competition, having five against West Ham in May 2017.

The 25-year-old will always be a hero on the red half of Merseyside for his Champions League heroics during the successful 2018-19 campaign, but his future at the club does not look so rosy. Diogo Jota's return in the coming weeks will drop him further down the pecking order, too.

- This was Burnley's second Premier League win away against the reigning champions (also v Chelsea in August 2017). Indeed, since the 2017-18 season, Burnley are the only side with two away league wins over the reigning English champions.
- Liverpool have gone four league games without scoring for the first time since May 2000. Indeed, the Reds have had a total of 87 shots since Mane's 12th minute strike against West Brom 25 days ago.
- This is the first time a Klopp side has gone four league games without scoring since his Mainz side did so in the Bundesliga from November to December 2006.
- Liverpool have conceded two penalty goals at Anfield in this season's Premier League (also Sander Berge for Sheffield United); they had only conceded two penalty goals at the ground under Klopp before 2020-21.
- Liverpool had 27 shots without scoring against Burnley, the most they have had in a single league match without finding the net since April 2013 v Reading (28), and most at Anfield since April 2012 v West Brom (30).

Liverpool come up against Manchester United for a second successive Sunday, this time in an FA Cup clash at Old Trafford. Burnley also have top-flight opponents in the fourth round, travelling to Fulham on the same day.