The usual suspects, Shakib Al Hasan and Mushfiqur Rahim proved their worth again as Bangladesh beat Afghanistan by 62 runs in the 31st match of the ICC Cricket World Cup 2019 at Rose Bowl, Southampton on Monday. Catch the highlights and scorecard of BAN vs AFG match here 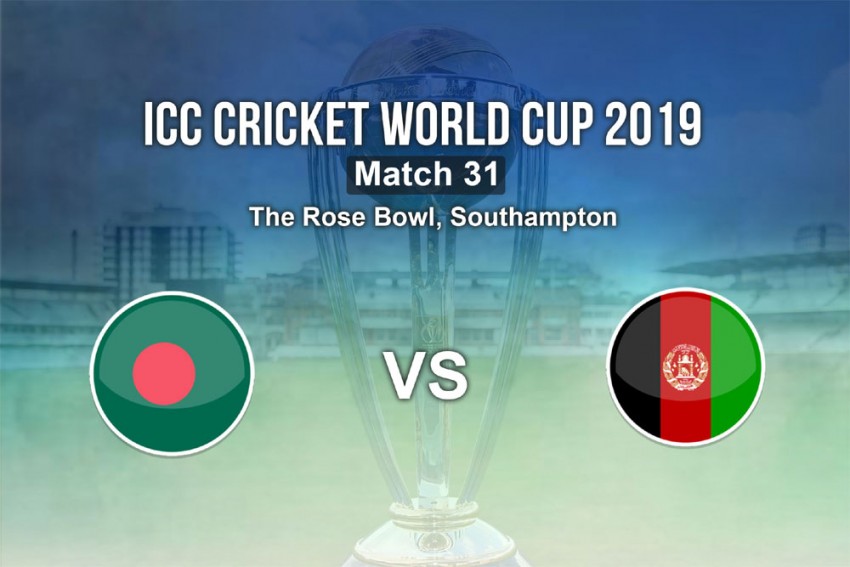 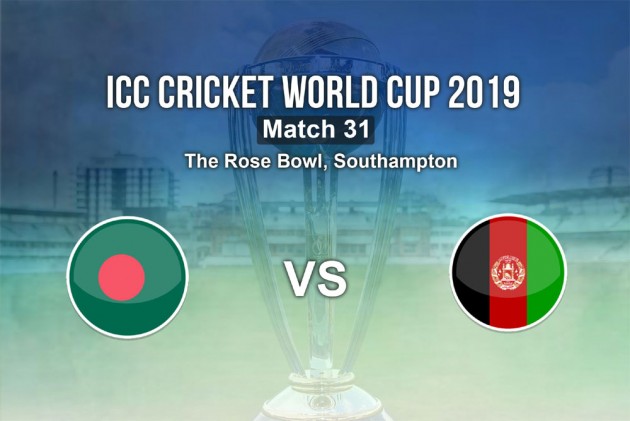 outlookindia.com
2019-06-24T23:39:29+05:30
Shakib Al Hasan, the world's best all-rounder, claimed five wickets after scoring a gritty half-century even as his long-time partner in crime, wicket-keeper Mushfiqur Rahim scored a stroke-full 83 off 87 as Bangladesh beat Afghanistan in their ICC Cricket World Cup 2019 group match at The Rose Bowl, Southampton on Monday. Get the highlights and score of the BAN and AFG match here.
REPORT | SCORECARD | POINTS TABLE | SCHEDULE
11:06 PM IST: A big win for Bangladesh, both in terms of margin and relevance. After posting 262, bowled out Afghanistan for 200. The win helped the Tigers alive in the tournament. They still need to win all their remaining matches though and also hope for favourable results from other fixtures. By the way, here's the points for the top seven teams in the points table: 11,10,9,8,7 (BAN),6,5.
Also Read: What Is The Other Big Record Shakib Created Today?

Shakib, who scored 51 off 69 and took five for 29, has become only the second player after India's Yuvraj Singh to do the double of a fifty and fifer in a World Cup match. He's also the man of the match.

But spare some thoughts for Mujeeb Ur Rahman, the youngest player in the tournament. He returned with figures of 3/39. Then what about that knock from Samiullah Shinwari, unbeaten 41 from 51.

10:43 PM IST: Mohammad Saifuddin on with his eighth over. Samiullah Shinwari creams the third ball for a four, straight. Shakib Al Hasan's diving effort fails to stop it. And right on cue. Cleans up Mujeeb Ur Rahman. AFG-200 all out. Bangladesh win by 62 runs. 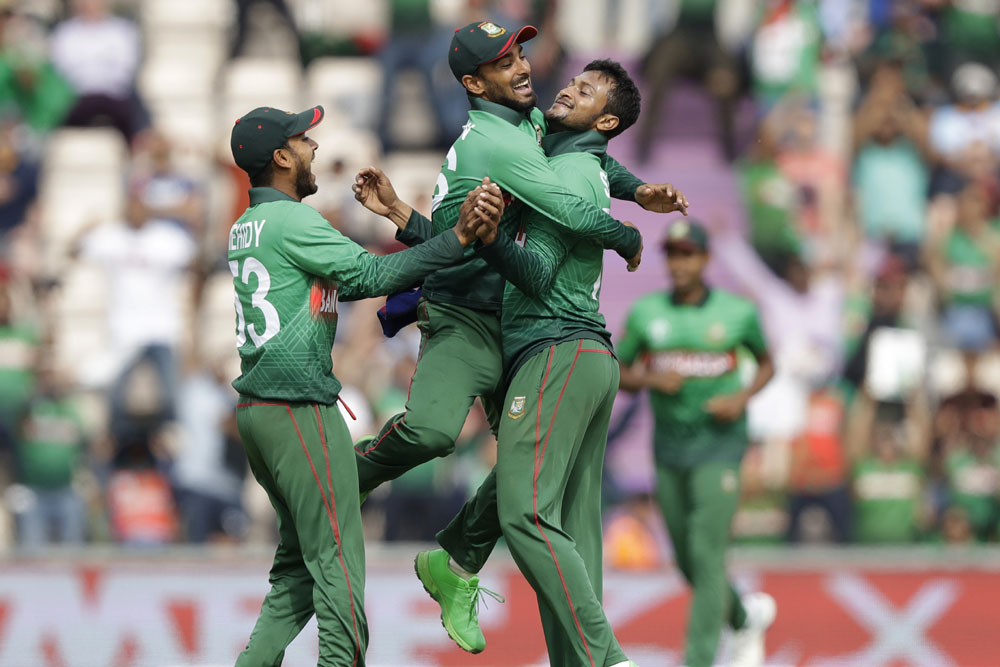 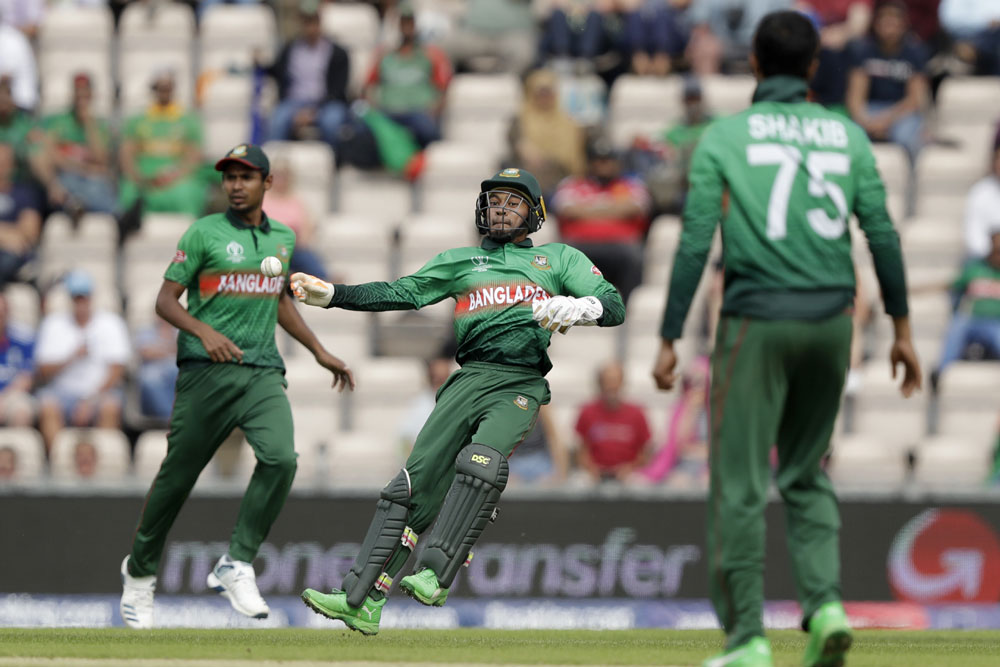 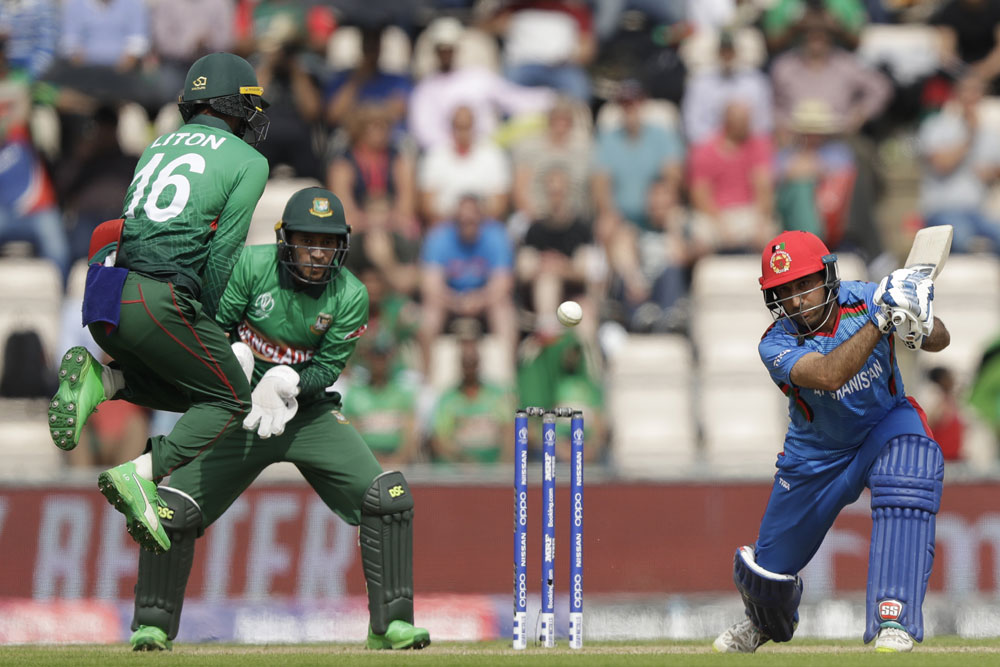 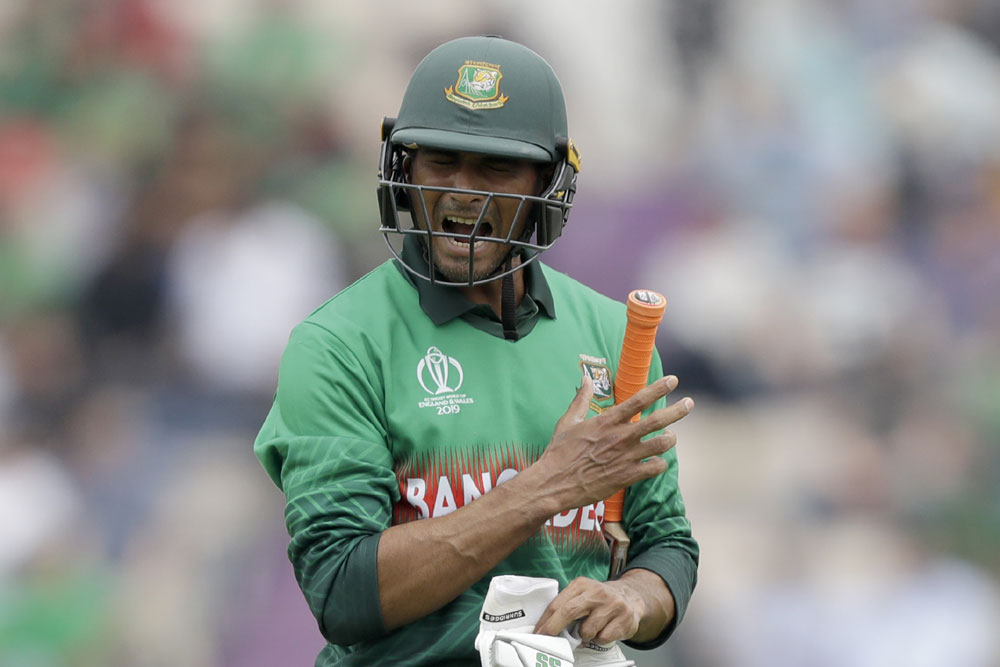 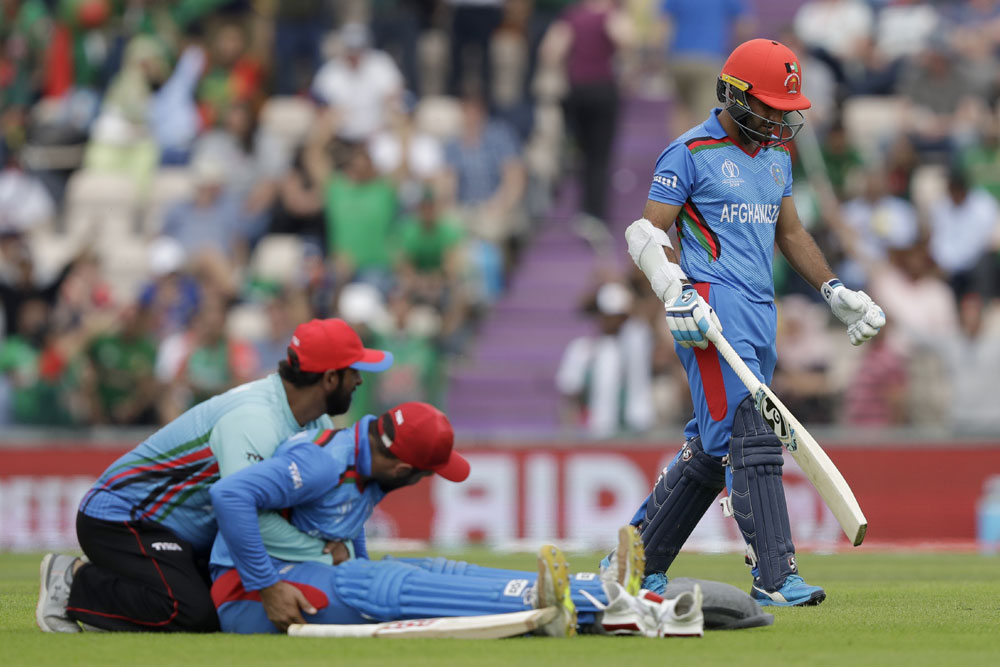 Energy sapping! Afghan captain Naib needs medical attention. AP Photo
Gulbadin Naib is having a cramp, and taking the opportunity, umpires call for Drinks.
8:23 PM IST: Mehidy Hasan continues. Two singles. 11 runs from the last five overs. AFG-60/1 after 16 overs.
8:19 PM IST: Bowling change. Mosaddek Hossain, off-spinner, on. Five dots to Gulbadin Naib, then a four off the last ball, to long-off. AFG-58/1 after 15 overs. The need 205 runs.
8:17 PM IST: Mehidy Hasan on with his second over. A very lame effort from Mashrafe Mortaza at mid-on. He fumbles and Hashmatullah Shahidi escapes a clear run out chance at bowler's end. That happened off the third ball. Mehidy ends the over with a brilliant delivery, which beat Hashmatullah Shahidi. Three runs from the over. AFG-54/1 after 14 overs. They need 209 more runs.
8:14 PM IST: Another brilliant over from Shakib Al Hasan. A single off the second ball. AFG-51/1 after 13 overs. They need 212 runs.
8:11 PM IST: Double bowling change. Mehidy Hasan, off-spinner, on. A single off the third ball. AFG-50/1 after 12 overs. 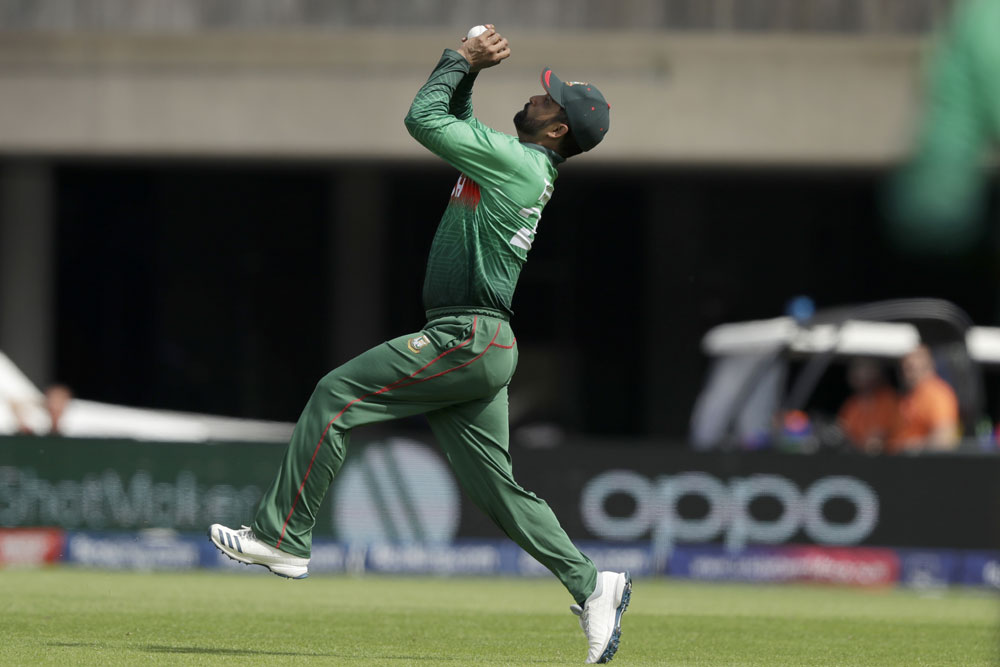 Held firmly! Tamim Iqbal takes the catch to send Rahmat Shah back. AP Photo
8:07 PM IST: Bowling change. Shakib Al Hasan, left-arm spinner, on. And strikes. He had Rahmat Shah (24 off 35) caught by Tamim Iqbal at mid-on. FoW-49/1 (10.5 overs). Hashmatullah Shahidi is the new man. Afghanistan need 214 more runs.
8:02 PM IST: Mohammad Saifuddin continues. A double off the first ball, to square leg. Two dot balls. Three runs from the over. AFG-48/0 after 10 overs. They need 215 more runs.
7:59 PM IST: Mashrafe Mortaza continues. Rahmat Shah hits the first ball for a four, to fine leg. Gulbadin Naib plays a lofted shot over mid-on but only for three runs. Rahmat hits the last ball for a four through point. 12 runs from the over. AFG-45/0 after nine overs. They need 218 runs.
Meanwhile, Andre Russell has been ruled out of the rest of the tournament through injury. Sunil Ambris will join the West Indies squad as his replacement.

BREAKING: Andre Russell has been ruled out of the rest of #CWC19 through injury. Sunil Ambris will join the West Indies squad as his replacement.#CWC19 | #MenInMaroon pic.twitter.com/BuhWdjskzq 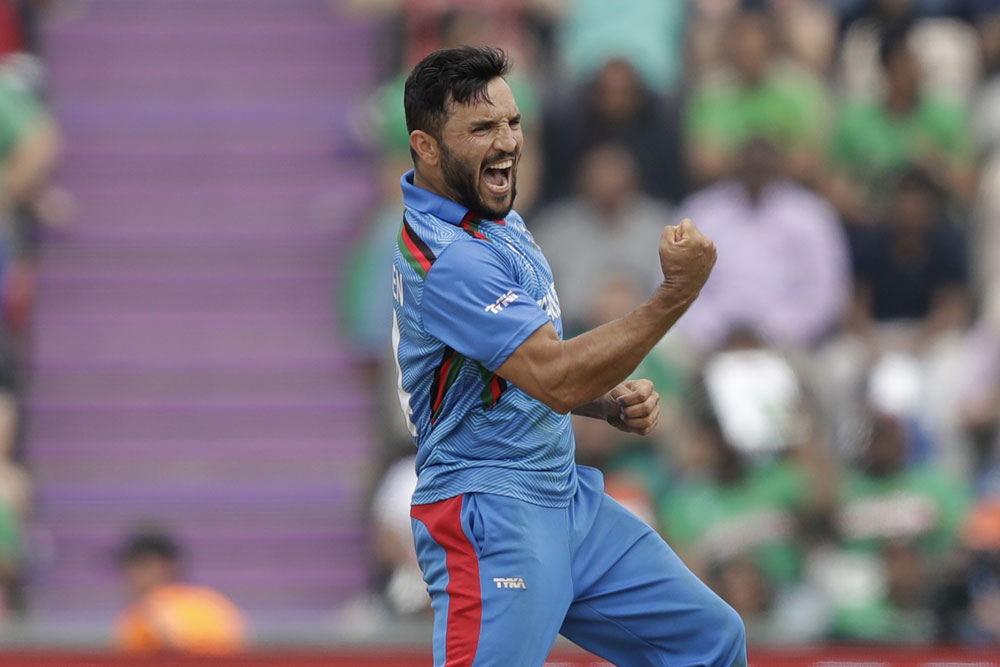 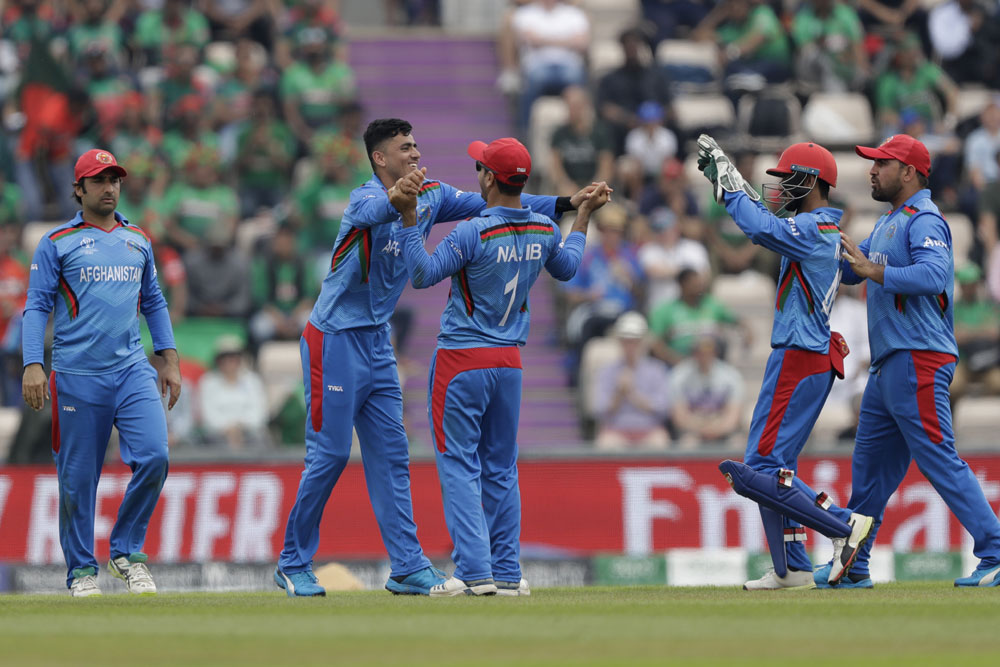 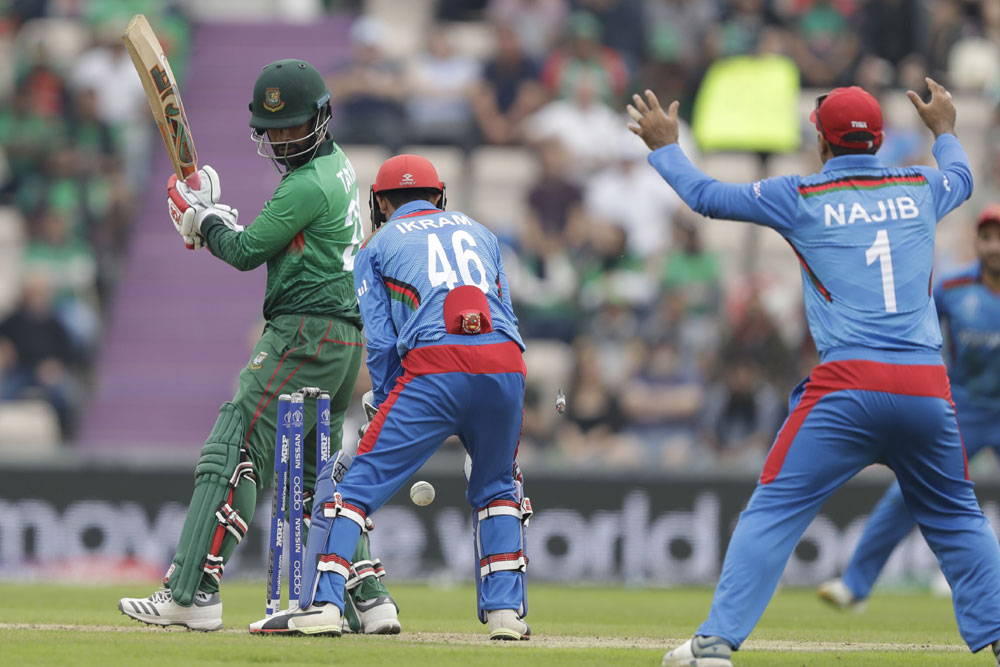 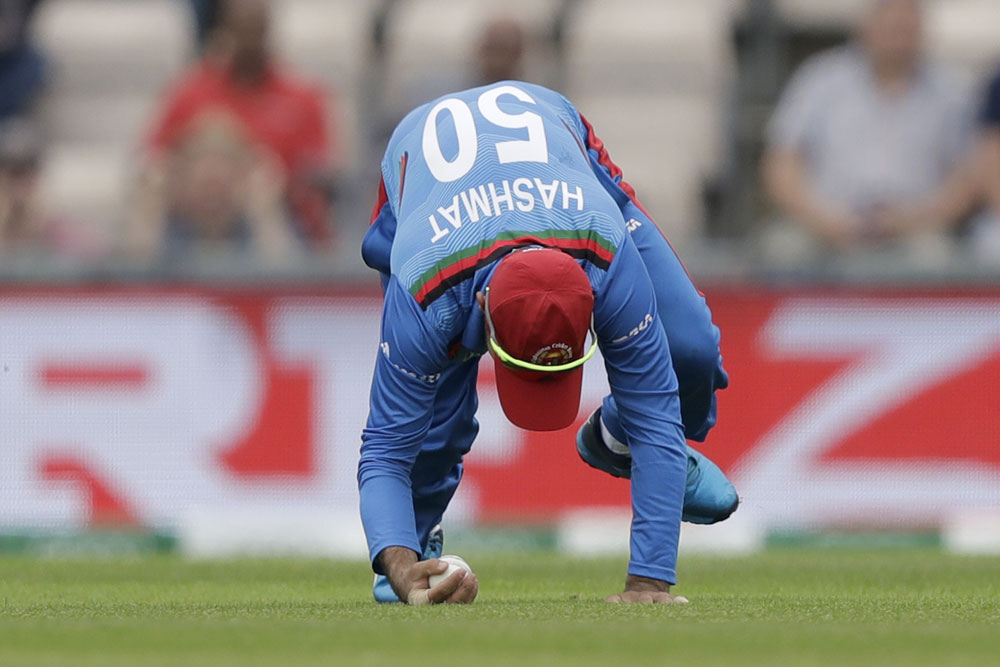 Very contentious! Onfield 'soft dismissal' beat TV-powered third umpire. AP Photo
3:33 PM IST: Mujeeb Ur Rahman continues. A dot to Liton Das, and the first wicket. Das (16 off 17) caught at short cover by Hashmatullah Shahidi. A debatable catch, to say the least. The third umpire says it's inconclusive then goes for the soft signal, which was out. FoW-23/1 (4.2 overs). Shakib Al Hasan is the new man. BAN-25/1 after five overs.
3:27 PM IST: Dawlat Zadran continues. Liton Das plays the first ball through mid-wicket. It will be a four in other grounds, but at Rose Bowl, it's only a three. Three dots, then Tamim Iqbal gets a lucky four. His drive just goes past the diving fielder at mid-off. Seven runs from the over. BAN-23/0 after four overs.
3:22 PM IST: Mujeeb Ur Rahman continues. Three singles from it. BAN-16/0 after three overs.
3:19 PM IST: Dawlat Zadran, right-arm fast medium, on. After two dots, Liton Das hits the third ball for a four through point. A single to end the over. Five runs from it. BAN-13/0 after two overs.
3:14 PM IST: 18-year-old Mujeeb Ur Rahman, offspinner, starts the proceedings. Liton Das takes a single to long one, then two wides. Das hits the second legal delivery for a four, thanks to a fumble at cover by Rahmat Shah. A single off the fourth ball, and eight runs from the over. Tamim Iqbal is Das' opening partner.
3:05 PM IST: Afghanistan captain Gulbadin Naib warns Bangladesh - We Are Drowned, But We'll Take You With Us. 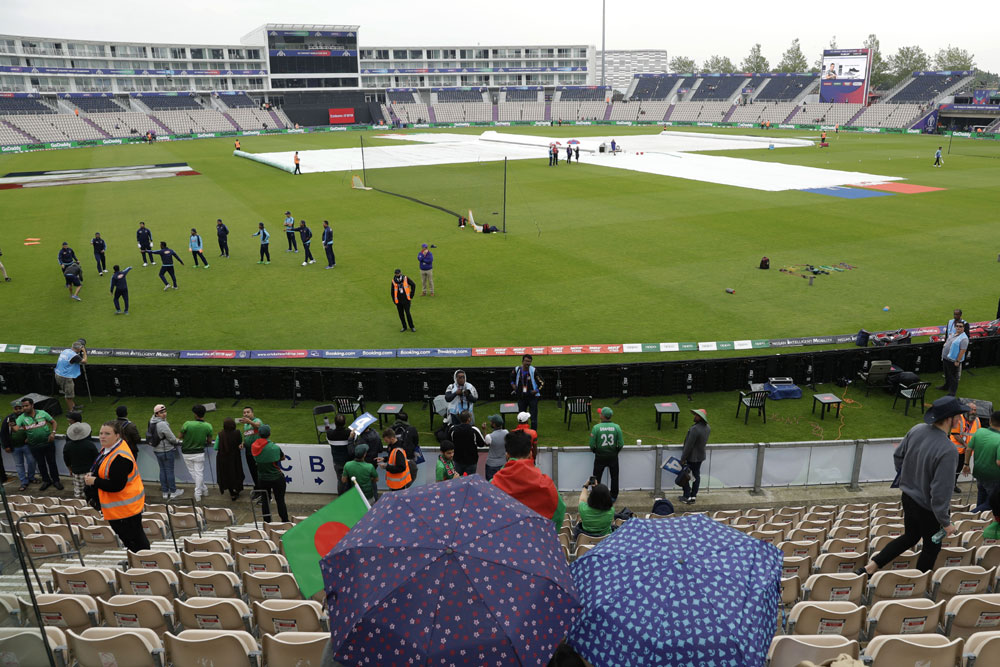 This is how the scene looked like a while ago at The Rose Bowl. AP Photo

2:47 PM IST: Couple of changes for both the teams. Saifuddin and Mosaddek in for Rubel and Sabbir for Bangladesh, while Afghanistan have brought Dawlat and Shenwari in Alam and Zazai. Here are the teams -

Afghanistan: Gulbadin Naib (c), Samiullah Shinwari, Rahmat Shah, Hashmatullah Shahidi, Asghar Afghan, Mohammad Nabi, Najibullah Zadran, Ikram Ali Khil (wk), Rashid Khan, Dawlat Zadran, Mujeeb Ur Rahman
2:40 PM IST: Afghanistan win the toss, will bowl first against Bangladesh.
2:30 PM IST: The toss has been delayed by 10 minutes.
2:00 PM IST: It continued to rain in Southampton. And the match will be affected. That's the news.
1:55 PM IST: This will be a huge week. All the top four teams in the table -- New Zealand, Australia, India and England have tournament-defining matches. READ our sneak peek.
1:50 PM IST: Relive that sensational Mohammed Shami hattrick against Afghanistan HERE.
1:41 PM IST: Here's our team-by-team guide on how to qualify for the semis. Yes, forget Afghanistan and South Africa.
1:30 PM IST: This is the final fixture of Cricket World Cup 2019 at The Rose Bowl. Here's how you can explore history, wildlife and the coastal regions of the busiest cruise port of England, that is Southampton.

Bangladesh are almost out of the contention of making it to the semifinals with five points from six games. However, if they manage to win all their three remaining games and results of matches of other teams go in their favour, the Tigers might sneak in the top four at the end of the round-robin league stage.

Bangladesh will rely on their batting, which has been a revelation in this World Cup. Shakib Al Hasan, who is the second leading scorer of the tournament, will once again lead the charge. And his presence in the centre will be crucial for the Tigers once again.

After hunting down a target of 322 against West Indies with ease, Mashrafe Mortaza & Co fought admirably in a 382-run chase against Australia, finishing with an impressive 333/8.

However, it's their bowling which has undone the batsmen's good work. They have conceded scores in excess of 320 in each of their last three completed games.

And against a formidable Afghanistan bowling attack, Bangladesh's own bowlers will have to step up to make life easier for their batsmen.

Their bowling unit -- which was taken for plenty by England as they posted 397/8 - delivered a commanding performance against the famed Indian batting line-up for a below-par total of 224. They, in fact, had a great chance of causing the biggest upset of the ongoing tournament. But, their batsmen, barring Mohammad Nabi, failed to rise to the occasion.
Gulbadin Naib would hope that both his batsmen and bowlers perform well as a unit against Bangladesh which have looked quite convincing in the ongoing tournament.

Bangladesh and Afghanistan are meeting for the eighth time in ODIs, with the Tigers winning four and losing three.

Shakib Al Hasan, with 425 runs at an average of 106.25 in five innings, is the only Bangladeshi batsman to score over 400 runs in a single World Cup.

Shakib Al Hasan has more wickets in 50-over games between the two nations than any other bowler, claiming 13.

Shakib has averaged 106 from his five innings so far in the tournament.

Mahmudullah is the leading scorer in this fixture with 243 runs in six innings.

Rashid Khan, who took 129 wickets at an average of 16.89 in 61 innings, is the highest wicket-taker for Afghanistan in World Cup.

"I think we're now getting better and better day by day. This is the team I wanted actually. Also in the batting side. So this is a good sign," Afghanistan captain Gulbadin Naib

"Everyone is expecting that we will win. Every match is the same in that we play to win. But I think we should be more careful in this game," Bangladesh batsman Mohammad Mithun