Shakib Al Hasan's half-century and 5/29 proved decisive in Bangladesh's 62-run win over Afghanistan at The Rose Bowl, Southampton on Monday. With the victory, Bangladesh kept their semifinal hopes alive in the ICC Cricket World Cup 2019. 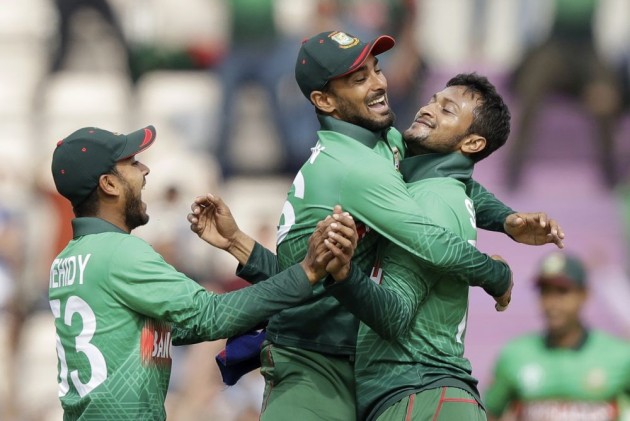 All-rounder Shakib again became the leading run-scorer in the tournament with a patient 51 before becoming only the second player to score a half-century and take five wickets in a World Cup contest – Yuvraj Singh being the other.

Mushfiqur Rahim followed up his century against Australia with a brilliant 83 on a tricky pitch, Mujeeb Ur Rahman (3-39) the pick of the bowlers in the Tigers' 262-7.

Shakib then excelled with the ball after reaching the 1000-run World Cup milestone and passing 50 for the fifth time in the tournament, his 5-29 the best of the tournament as Afghanistan were all out for 200 two days after giving India a monumental scare.

Captain Gulbadin Naib top scored with 47 after taking a couple of wickets and Samiullah Shinwari made a resilient unbeaten 49, but Afghanistan – eliminated following a dramatic 11-run loss to Virat Kohli's men – were unable to secure a first win.

Bangladesh's third success of the competition leaves them in fifth place, just a point behind fourth-placed England – the only blow being the loss of Mahmudullah to a calf injury.

Spinner Mujeeb was excellent in a nail-biting defeat to India and he excelled again at the same Southampton venue.

The experiment of sending Liton Das in at the top of the order failed when Hashmatullah Shahidi's catch was deemed to be clean and Mujeeb trapped the in-form Shakib for a patient 51 after Mohammad Nabi removed Tamim Iqbal for 36.

While Rashid Khan again had no luck as Shakib was successful with a review when it appeared that the leg-spinner had pinned him lbw for 26, Mujeeb also snared Soumya Sarkar as he bowled with great variation and control.

The magnificent Mushfiqur carried on where he left off against Australia, batting with power and improvisation in another classy knock.

There were switch hits, sweeps and glorious drives from the wicketkeeper-batsman, who brought up his half-century with a big six down the ground after 12 boundary-less overs.

Afghanistan lacked sharpness in the field and Mushfiqur gave them the runaround in another masterful innings, with Mosaddek Hossain blasting a rapid 35.

Shakib – who scored a half-century in a crushing win over the same opponents in the last World Cup – then demonstrated that he is one of the best all-rounders in the game by showing his prowess with ball in hand.

He saw the back of Rahmat Shah in his first over to end an opening stand of 49 and had figures of 3-6 from five overs after dismissing Gulbadin and Nabi in the 29th over – the latter bowled after missing a lovely flighted delivery.

The probing Shakib could do no wrong, sending Asghar Afghan and Najibullah Zadran on their way to claim his best ODI figures as Afghanistan crumbled.