Mayank Agarwal's century and fifties from Virat Kohli, Cheteshwar Pujara took India to 273/3 against South Africa on Day 1 of the second Test in Pune. Get here highlights of India vs South Africa, 2nd Test, Day 1 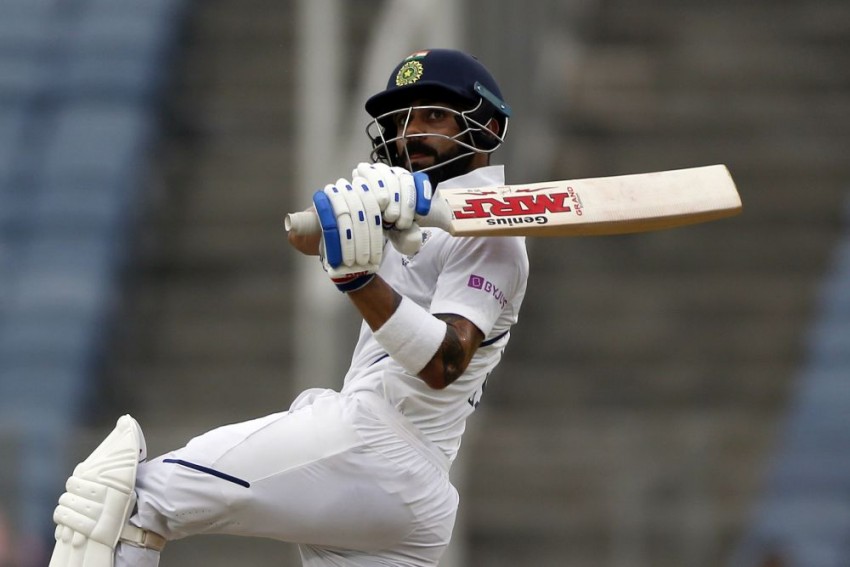 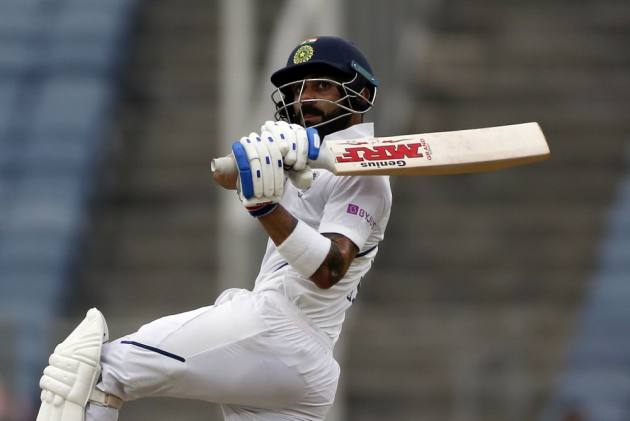 India were 273/3 at stumps on the opening day of the second Test in Pune on Thursday (October 10). Mayank Agarwal made 108, his second Test century, while Cheteshwar Pujara scored 58. Skipper Virat Kohli (63*) and Ajinkya Rahane (18*) are the two batsmen at the crease. For South Africa, Kagiso Rabada (3/48) picked up all three wickets. Follow highlights of IND vs SA here (SCORECARD | CRICKET NEWS)

16:19 hrs IST: FOUR! Fuller ball from Philander, outside off, Kohli leans into the cover drive. Bavuma chases but can't stop it. 23rd half-century for Kohli. Gets a standing ovation from his teammates. India are 257/3. Rahane 12*

16:06 hrs IST: FOUR! Short of length delivery from Muthusamy, outside off, Rahane goes for the cut, didn't middle it, but it's good enough to go past the short third man fielder for a boundary. India are 238/3. Kohli 37*, Rahane 9*

Indian sprinter Nirmala Sheoran has been stripped off her two Asian Championships gold medals and banned for four years by the Athletics Integrity Unit (AIU), which manages track and field doping cases. The AIU came out with the order to ban Nirmala on October 7 for testing positive for the steroids drostanolone and metenolone at a competition back home in June 2018. READ HERE

15:44 hrs IST: Drinks are on the field now. New ball will be due in eight overs. Can expect South Africa to attack more. India are 219/3

Meanwhile, Japanese Grand Prix organisers on Thursday (October 10) pledged that the safety of fans and drivers would be their top priority as they monitor a massive typhoon threatening to cause havoc at the weekend. Typhoon Hagibis is classed as "violent" -- the top end of Japan's storm scale and the equivalent of a category five hurricane -- and is currently predicted to make landfall near Tokyo on Saturday (October 12).

The latest forecasts for Saturday predict heavy rain and storm-force winds to batter the Suzuka Circuit, which lies near the Honshu coast about 300 kilometres (180 miles) west of Tokyo.

15:26 hrs IST: FOUR! Short delivery from Nortje, Kohli looks to hook but gets a glove on it. De Kock dives to his left but can't stop it from running towards the boundary. India are 209/3. Kohli 19*, Rahane 0*

15:18 hrs IST: This is a real challenge for India's middle-order with Rabada bowling beautifully. Two more wickets and the visitors could be back in this game. India are 200/3. Kohli 10*, Rahane 0*

15:05 hrs IST: OUT! Rabada strikes in his first over this session and gets Agarwal (108). Another good catch by Du Plessis in the slip cordon. Full outside off, Agarwal gets an outside edge, and the South Africa skipper does the rest. Ajinkya Rahane comes to the crease. India are 198/3.

14:46 hrs IST: FOUR! Another century for Agarwal. What a knock! Back of a length delivery from Philander, outside off, and the Indian hits this past the gully fielder for a boundary. Kohli hugs him and then the helmet comes off to acknowledge the applause of the crowd and the dressing room. India are 189/2

14:42 hrs IST: BACK-TO-BACK SIXES FROM AGARWAL - First one was smashed over long-off, while the second was hit straight over the bowler's head. Moves to 99 in style. Little bit of Virender Sehwag in that approach! Costly over from Maharaj, 13 off it. India are 183/2. Kohli 2*

14:31 hrs IST: Welcome back for the final session. The floodlights have been turned on. Fairly grey over the ground now. Maharaj to resume

14:10 hrs IST: And that's tea. India 168/2. Agarwal 86*, Kohli 0*. It was once again Rabada who provided the breakthrough. Pujara, who hit 58, added 138 with Agarwal. The Karnataka batsman, who scored a double-century in the last Test, is looking good for another century. We'll be back in 20 minutes. Stay tuned!

14:02 hrs IST: OUT! Length ball from Rabada, outside off, moves just a little, Pujara looks to defend but gets an outside edge and Du Plessis takes a wonderful catch at first slip. End of a very good innings - 58(112). Virat Kohli comes to the crease. India are 163/2.

13:56 hrs IST: FOUR! Short and wide from Maharaj, outside off, Pujara goes back and cuts it past backward point for a boundary. A well-deserved half-century for the India No. 3. Second in a row. Should look to get past the three-figure mark now. India are 156/1. Agarwal 80*

13:24 hrs IST: FOUR! Pujara uses his feet well and whips it through the fine leg region for a boundary. This is turning out to be a brilliant partnership for India, who are 120/1. Agarwal 61*, Pujara 35*

13:12 hrs IST: Time for drinks! Another hour in India's favour. Agarwal and Pujara have added 38 runs and the former has reached his fifty in the process. The Proteas need a wicket as soon as possible. India are 115/1

Rabada's opening spell was a probing one and he was unlucky to miss out on getting the better of Pujara when Temba Bavuma, at short leg, missed a reflex catch. The batsman was yet to get off the mark.

Agarwal played smartly and waited for the third seamer, rookie Nortje, to be introduced into the attack. Nortje was clearly the fastest among the trio of pacers and Agarwal started with a streaky boundary between the slips but soon got into the groove with a number of boundaries through the off-side.

12:46 hrs IST: FOUR! Another slight short delivery from Maharaj, Agarwal doesn't look to over-hit it, just times it through point for a boundary. That's a half-century for the India opener. Can he get a big one today as well? India are 101/1. Pujara 27*

12:38 hrs IST: FOUR! Fraction short from Maharaj, not that wide though, and Pujara cuts it from in front of the stumps and towards backward point. Super! India are 96/1. Agarwal 45*, Pujara 27*

Stefano Pioli has been appointed as the new head coach of AC Milan, replacing the sacked Marco Giampaolo. The Rossoneri severed ties with Giampaolo on Tuesday after just seven competitive games in charge, despite a thrilling 2-1 victory over Genoa. READ HERE

12:13 hrs IST: All set for the second session. Pujara and Agarwal have made their way to the middle. Maharaj to resume proceedings.

Meanwhile, six-time champion MC Mary Kom (51kg) on Thursday (October 10) surpassed herself as the most successful boxer in the history of the Women's World Boxing Championships, securing an unprecedented eighth medal by advancing to the semifinals in Russia. READ HERE

11:31 hrs IST: That's lunch. India 77/1. Agarwal 34*, Pujara 19*. Solid session for the hosts. Rohit fell early, but Agarwal and Pujara steadied the ship. Nortje struggling with the length, while Philander could have tried to attack the Indian batsmen with short deliveries. Join us in about 35 minutes for the second session.

11:13 hrs IST: FOUR! Maharaj offers flight, Pujara dances down the track and whips it towards midwicket. Rabada with the chase, puts in the dive but can't stop it. Expensive over from the South African, eight off it. India are 68/1. Agarwal 30*, Pujara 14*

Some spin now. Keshav Maharaj comes into the attack.

10:47 hrs IST: FOUR! Too full from Nortje, outside off, Agarwal gets forward, presents the full face of the bat and drives it back past the bowler. SECOND BOUNDARY - Over-pitched, just outside off, and Agarwal hit it through covers. THIRD BOUNDARY - Too full from the South African once again, and the Indian drives through extra cover this time. Costly over from Nortje, 12 off it. India are 49/1. Agarwal 26*, Pujara 0*

Virat Kohli has called for a change in the points system for the new world Test championship, saying that an away win should get THIS MUCH the reward. He insisted that the new championship has already improved standards in Tests.

10:34 hrs IST: Drinks are on the field now. Fine show from the Protea seamers. India (36/1), despite losing Rohit cheaply, would be quite happy. If they build a big partnership now, the visitors will be under tremendous pressure.

10:23 hrs IST: FOUR! Full ball from Nortje, outside off, in the slot to drive and Agarwal creams this through cover. Moves into double-figures. Just before this, Agarwal had some routine concussion tests after being hit on the helmet. India are 33/1.

10:16 hrs IST: OUT! Perfect length from Rabada, on middle and off stump, moves away and it was too close to the Indian to not play at it, and he ends up getting an outside edge. Easy catch for De Kock. Rohit, the twin-centurion in the previous Test, has to depart for 14. Cheteshwar Pujara comes to the crease. India are 25/1

10:11 hrs IST: FOUR! Touch short from Nortje, outside off, Agarwal goes for the cut off the back foot, but gets a toe end. The keeper and first slip fail to stop it. A speedy first over from the South African - most of the deliveries above 145 km/h! India are 23/0. Rohit 12*, Agarwal 9*

First change in bowling. Anrich Nortje comes into the attack.

10:02 hrs IST: Rohit's tactic to come down the crease against Philander is a smart one. This way the Indian can survive against the new ball - something that could help him in overseas Tests. India are 14/0. Rohit 8*, Agarwal 5*

Meanwhile, former Australia pacer Jason Gillespie will continue as head coach of Sussex Cricket until the end of the 2022 season after being handed a contract extension by the club on Wednesday (October 9). The 44-year-old from Sydney had joined Sussex as head coach at the start of the 2018 season and led Sussex Sharks to the knockout stages of the Vitality Blast in both of his seasons in charge, including to the final in 2018.

09:49 hrs IST: FOUR! Short of length from Rabada, seaming away outside off, and Agarwal pokes, flies off the edge, between third slip and gully. First boundary of the day! India are 12/0. Rohit 6*, Agarwal 5*

09:39 hrs IST: Back of a length delivery from Rabada, shaping into Rohit, and he comfortably helps this through midwicket for a treble. India are 5/0. Rohit 4*, Agarwal 1*

09:35 hrs IST: Too straight from Philander, and Agarwal works it off his pads to square leg to get off the mark. Rohit too opens his account with a single. India are 2/0. Kagiso Rabada comes into the attack.

09:31 hrs IST: South Africa in a huddle at the boundary. Rohit Sharma and Mayank Agarwal are at the crease. Vernon Philander to open the attack. Should be a great contest!

09:02 hrs IST: India have won the toss and have opted to bat

Faf du Plessis - "The difference with us from 2015, where you try and survive in Indian spinning conditions and with that sometimes you can become too defensive and you allow the opposition to be on top of you the whole time, now it needs to be a good combination of positive play, an element of taking risks at some stages of the game to try and counter that pressure from the bowling. The balance between attack and defense is key when you are playing in the subcontinent."

Virat Kohli - "The importance of every game has become that much more. In situations, in a three-match series, you probably would have played out a draw, but teams are going to go for wins and get those extra points. So, I think it's great for Test cricket. The matches are going to be that much more exciting. We have to be professional in every session that we play."

DID YOU KNOW - Dean Elgar has more runs (299) and more wickets (6) in India than any of the other South African players on tour.

STAT ATTACK - Keshav Maharaj is one wicket away from becoming the fifth South Africa spinner to 100 Test wickets.

08:27 hrs IST: A warm welcome to Outlook's live coverage of the second Test between India and South Africa.