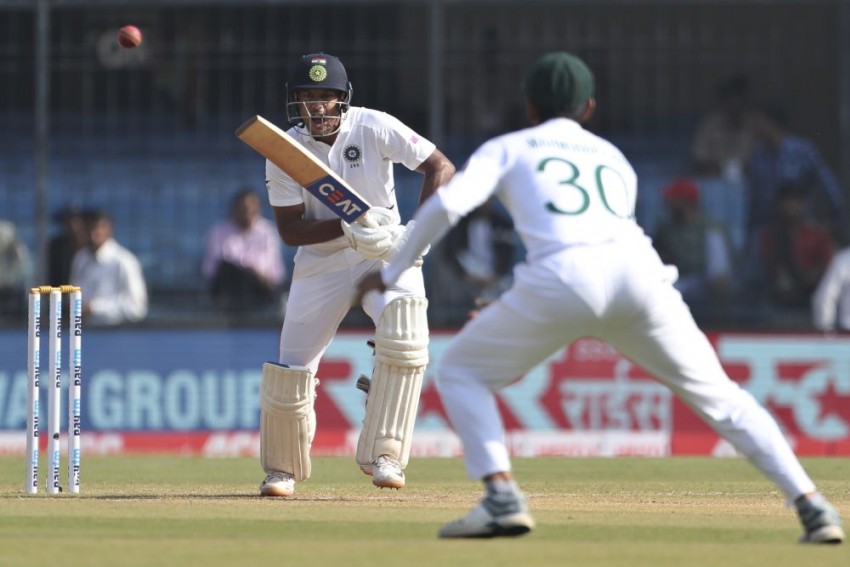 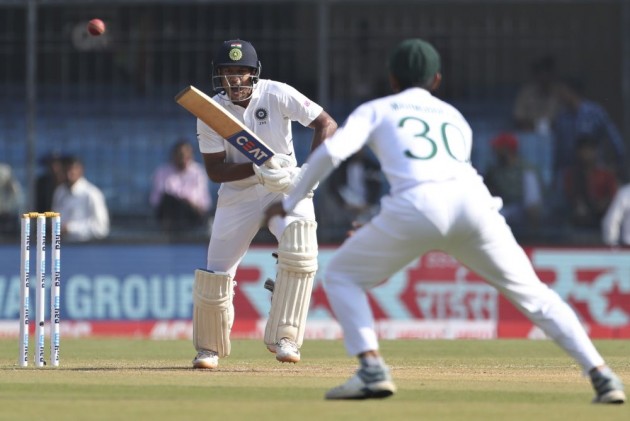 Mayank Agarwal hit his second double century, in just the 12th innings in international cricket. Besides becoming the secod fastest to score two double tons, the opener entertertain everyone with some lusty hittings. His 330-ball knock was laced with 28 fours and a eight sixes, for a personal best of 243. He was ably supported by Ajinkya Rahane (86) and Ravindra Jadeja (60 not out). The only disappointment for the hosts was skipper Virat Kohli's very rare duck. However, India have, well and truly, tightened the screws. A lead of 343 runs with three days to play left in Indore. From the team's perpective, India have scored 400+ runs in a single day for only the third time. And that tells the story of India's domination. Catch day's highlights here: (REPORT | SCORECARD | CRICKET NEWS)

16:13 hrs IST: SIX RUNNS!! Jadeja brings out the sword and slams Taijul for a six in a full arc! It goes over long on.

15:49 hrs IST: SIX! Agarwal gets to his double-century with a maximum! Virender Sehwag would be very proud of that. Flight on offer, the Indian advances and creams this over wide long-on. Kohli is happy as is the full team. What a knock! Take a bow, Mayank Agarwal! Can he score a triple here? India 365/4, lead by 215. Jadeja 12*

15:17 hrs IST: SIX! Tossed up from Mehidy, Agarwal comes down the pitch and smacks this over straight down the ground into the sightscreen. What a hit! Costly over from the offspinner, nine off it. India 337/4, lead by 187. Agarwal 178*, Jadeja 8*

14:45 hrs IST: OUT! Length ball from Jayed, outside off, Rahane slaps this over the infield but Taijul's is placed at deep point. Comes some steps forward and does the rest. That's four for Jayed! Rahane out after a wonderful 172-ball 86. Ravindra Jadeja comes to the crease. India 309/4, lead by 159. Agarwal 158*

13:59 hrs IST: The physio is attending Agarwal who seems to be be struggling with cramps. Meanwhile, Bangladesh have taken the second new ball. India 294/3. Agarwal 155*, Rahane 75*

13:46 hrs IST: FOUR! Length ball from Taijul, on middle. and Agarwal muscles this past square leg for a boundary. That's 150 up for him! Great batting! Can he score his second double-century? (First one came against South Africa). India 283/3. Rahane 68*

13:39 hrs IST: SIX! Full from Taijul, on off, ball turns away but Agarwal charges down the track before going inside-out over extra cover. Brilliant! Looks so comfortable while stepping out to the spinners. India 266/3, lead by 116. Agarwal 140*, Rahane 62*

Agarwal is getting some treatment from the physio. Looks a lower-back issue. Okay, he is back on his feet now!

13:28 hrs IST: FOUR! Too short from Mehidy, Agarwal goes back and pulls this wide of deep mid-wicket for a boundary. Jayed tried to stop it with his feet but he failed. Forty-three runs off the last 10 overs. India 255/3. Agarwal 133*, Rahane 58*

13:16 hrs IST: Both batsmen have completed their milestones and Bangladesh's bowlers aren't getting much help off the pitch. A worrying sign for the visitors. India 237/3, lead by 87. Agarwal 118*, Rahane 55*

12:55 hrs IST: FOUR! Quicker delivery from Mehidy, hint of width outside off, Agarwal waits for it and then hits past backward point for a boundary. Delicate! India 222/3. Agarwal 111*, Rahane 47*

12:50 hrs IST: Agarwal's real challenge will be during the overseas tours of South Africa, New Zealand where bowlers like Kagiso Rabada and Trent Boult will test his technique and temperament. While he performed on his maiden tour of Australia, the next series in New Zealand will test his resolve further.

12:35 hrs IST: Two runs and Agarwal gets to his third century in eight Tests. Length ball from Ebadat, on middle, and Agarwal flicks off his waist to deep midwicket. Raises his bat in the process. What a moment for the Karnataka batsman! The crowd is ecstatic, so are his teammates in the dressing room. India 206/3. Rahane 42*

12:14 hrs IST: FOUR! Five away from reaching the three-figure mark. Touch short from Mehidy, but it's enough for Agarwal to pull this past square leg for a boundary. India 192/3. Rahane 35*

12:11 hrs IST: Welcome back to the post-lunch session. Agarwal and Rahane stride out to the middle. Mehidy now

Roger Federer triumphed in a win-or-bust ATP Finals encounter with Novak Djokovic at the O2 Arena on Thursday (November 14), meaning Rafael Nadal will end 2019 as the World No. 1. Six-time champion Federer was in fine fettle as he restricted the rallies to seal an impressive victory over Djokovic, ensuring it was he who qualified from Group Bjorn Borg behind Dominic Thiem. READ HERE

11:31 hrs IST: That's lunch. India 188/3. Agarwal 91*, Rahane 35*. Agarwal is now inching towards his third Test century. On the other hand, the Mumbaikar has looked in sublime touch and trouble-free for most parts of his stay at the crease. Pujara played a superb knock and should have got a century. Kohli was out to a lovely indipper from Jayed, who has all three wickets so far. We'll be back in 40 minutes. Stay tuned!

11:17 hrs IST: Rahane seems to be suffering from cramps. The physio is out to give him some stretches. Rahane suddenly cringed in pain as he changed ends because he and Agarwal were on a collision course while running the single. Luckily, nothing serious. Back up on his feet.

11:06 hrs IST: Thirty-two runs off the last 60 balls. India 170/3. Agarwal survives a close call. Initial decision was out (LBW) but he decided to review. Ball-tracking showed that it was missing leg. The India opener was looking to sweep and was done in the pace of the delivery, the impact was in front of leg. Agarwal 82*, Rahane 26*

Mehidy Hasan comes into the attack. Short leg and slip in place

10:33 hrs IST: FOUR! Full toss from Taijul, on middle, and Rahane hits that away between cover and mid-off for a boundary. Easy pickings! India are 146/3. Agarwal 63*, Rahane 21*. Drinks are on the field now. Two of India's best players have been removed, but Agarwal and Rahane are playing sensibly. India only four runs away from taking a lead.

10:15 hrs IST: FOUR! A good length delivery from Jayed, Rahane opens the bat face and guides it between second slip and gully. Expensive over from the Bangladeshi, 10 off it. India 129/3. Agarwal 58*, Rahane 9*

10:04 hrs IST: OUT! Appeal for LBW but not given! And Bangladesh review. Length delivery, pitched outside off, but angles in. Hits Kohli's back leg as he misses the defense, and the ball is shattering the leg stump. Three reds and the India skipper is out for a duck. Third wicket for Jayed. He's doing the job for his side. Ajinkya Rahane comes to the crease. India 119/3. Agarwal 58*

09:57 hrs IST: FOUR! Back of a length from Ebadat, on off, Agarwal rocks back and pulls this over midwicket for a boundary. Gets to his fourth Test fifty in style. Needs to keep going. Poor over from Ebadat, nine off it. India 114/2. Kohli 0*

09:52 hrs IST: OUT! Full from Jayed, outside off, moves away slightly, Pujara (54) looks to drive but gets a thick outside edge, and the fielder at gully - Saif Hassan (sub) - takes a brilliant catch. Virat Kohli comes to the crease. India 105/2. Agarwal 44*

09:50 hrs IST: FOUR! Half volley from Jayed, outside off, and Agarwal drives through the covers for a boundary. Shot! Moves into 40s

09:41 hrs IST: FOUR! Length delivery from Jayed, outside off, and cuts this over the infield. Just wide of deep point. Fifty off only 68 balls. The India No. 3 has been on fire in this innings. Raises his bat to the dugout. Can he get a big one today? India 99/1, trail by 51. Agarwal 39*

09:30 hrs IST: All set for live action. The Pujara-Agarwal pair has already made 72. Ebadat will kickstart proceedings. Meanwhile, big news from the BCCI corridors. Rahul Dravid has been cleared of any conflict of interest.

09:00 hrs IST: Bangladesh lost their last seven wickets for 51 runs and were eventually dismissed for a paltry 150. In response, Rohit departed early but Mayank and Pujara blunted the attack, helping India to a commanding position at the close of play on Day 1. They'll look to pile more runs and misery on Bangladesh. Will the visitors be able to turn things around?

08:38 hrs IST: Hello and welcome to Outlook's live coverage of Day 2 of the opening Test between India and Bangladesh.

Bangladesh captain Mominul Haque must have been questioning his decision to bat first when The Tigers were reduced to 12/2, with Shadman Islam (6) edging Ishant behind after Umesh removed Imrul Kayes (6).

Shami then removed Mohammad Mithun (13) and matters could have become even worse for Bangladesh but for some shoddy work in the slips.

Mushfiqur Rahim was put down by Virat Kohli on three and Ajinkya Rahane with 14 to his name, capitalising by striking for a straight six, then dispatching the next ball for four.

Ashwin ended a fourth-wicket stand of 68 when Mominul (37) was cleaned up. The spinner also bowled Mahmudullah (10) after he was spilled by Rahane.

Shami generated sharp swing to uproot Mushfiqur's off stump and the tourists lost their last five wickets for only 10 runs after he departed for 43.

Abu Jayed snared Rohit caught behind for only six, but Pujara and Agarwal were untroubled in an unbroken stand of 72.