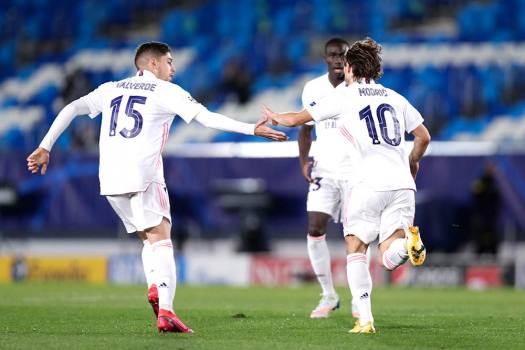 Winless and in last place in its Champions League group, Real Madrid needs a victory against Inter Milan to ease the pressure.

Another setback at home on Tuesday could jeopardize Madrid's chances of advancing and lead to its first group-stage elimination in three decades.

"It's a final and we are going to approach it like that," Madrid coach Zinedine Zidane said on Monday.

"Three important points will be up for grabs and we are going to try to get them."

Inter Milan also is winless after two matches in Group B, having drawn at home against Borussia Mönchengladbach and at Shakhtar Donetsk. It also needs a good result on Tuesday to stay in position to advance.

"It's a team that we know very well," Zidane said of Inter.

Madrid needed a late goal by Casemiro to salvage a 2-2 draw at Borussia Mönchengladbach last week. It had lost 3-2 in its opener at home against Shakhtar after going down 3-0 at halftime.

"Soccer in general is more evenly matched and there are no small teams," Zidane said.

"Soccer is becoming more and more difficult and beautiful and everyone can beat everyone nowadays and that's why we have to be happy every time we succeed."

"Last year we didn't win the Champions League and that changes things, but we always aim to win it," Zidane said.

"I have no doubt that the players have it in their minds. It will be difficult, we have to work hard to try to win it."

Despite the struggles in the Champions League, Madrid has been playing well in the Spanish league, having won five of its last six matches to sit in second place in the standings with a game in hand.

Eden Hazard made his first start of the season in the 4-1 win against Huesca on Saturday after nursing a muscle injury, and he is expected to be back in the starting lineup on Tuesday at the Alfredo Di Stéfano Stadium. Lucas Vázquez, who had also been nursing an injury, will also likely be available.

Inter Milan is expected to be without striker Romelu Lukaku because of an injury. The Italian club is coming off a 2-2 home draw against Parma in Serie A, where it is in sixth place after six matches.