La Liga: Real Madrid And Atletico Warm Up For City Derby With Victories

Vinicius Junior and debutant Rodrygo Goes earned a much-changed Real Madrid a 2-0 win over Osasuna at the Santiago Bernabeu that sent them top of La Liga. 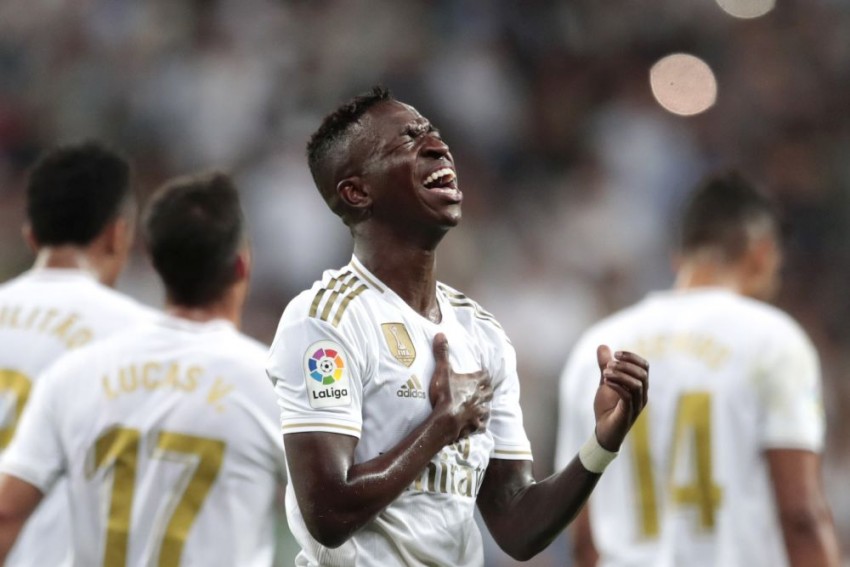 Vinicius Junior celebrates after scoring a goal during the La Liga game between Real Madrid and Osasuna at the Santiago Bernabeu stadium in Madrid on Wednesday (September 25).
AP
Outlook Web Bureau September 26, 2019 00:00 IST La Liga: Real Madrid And Atletico Warm Up For City Derby With Victories 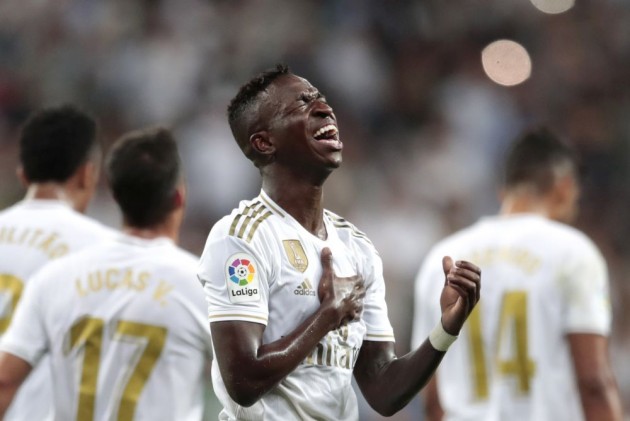 Real Madrid's crisis has been averted for the time being at least after they beat Osasuna 2-0 without Eden Hazard and Gareth Bale to go top of La Liga.

Hazard and Bale were among a number of players rested by coach Zinedine Zidane, with Real facing seven games in 21 days, the next of them against city rivals Atletico Madrid on Saturday (September 28).

Vinicius Junior, who has endured a difficult few months, filled the void, bending a shot into the top corner before crying tears of what presumably were a mixture of joy and relief on Wednesday (September 25).

This time last year the 19-year-old exploded onto the scene but injury and then a dip in form saw him drift, with this a chance to reassert himself in a much-rotated line-up.

If Vinicius was Madrid's Brazilian sensation 12 months ago, Rodrygo might be one for the present.

The 18-year-old, who was bought from Santos in 2018 but joined last summer, added a superb second goal, and his first for the club, just one minute after coming off the bench for a remarkable debut.

"I'm glad for them," said Zidane. "Sometimes we forget they are 18 (and 19) years old. We have seen the emotion they felt about scoring at the Bernabeu. I liked Rodrygo's goal but I liked the control even more."

Earlier, Atletico's Alvaro Morata made a swift impact too but with less positive results after he was sent off eight minutes after being introduced as a substitute against Real Mallorca.

Atletico were already 2-0 up thanks to goals from Diego Costa and Joao Felix but Morata will now be suspended for the derby at the Wanda Metropolitano.

The Spaniard's dreadful night got worse as he also appeared to engage in a heated exchange with a fan as he later left the stadium.

A week ago it would have been almost unthinkable that Atletico would play their rivals in a contest of first against second in La Liga but that could now be the setting this weekend, depending on Sevilla and Real Sociedad's results on Thursday.

La Real beat Atletico, who were then held to a goalless draw by Celta Vigo, but by far the deeper sense of gloom had engulfed Zidane's side, after they were humbled 3-0 by Paris Saint-Germain in the Champions League.

That was Real's worst defeat under Zidane as coach and prompted questions about the Frenchman's future, with Jose Mourinho available and seemingly waiting in the wings.

Instead, back-to-back victories for the first time since Zidane came back in March have lifted the malaise and offered hope there is still life in this Madrid squad, despite the lack of change since the summer.

"We believe in what we do," Zidane said. "With humility and work you achieve a lot. This is just the start."

The only disappointment might have been the lack of a goal for Luka Jovic, who missed some excellent chances and then did score, only to have it ruled out by VAR.

Vinicius had started the first two games of the season but none since, while he was without a goal himself in seven months.

His first under Zidane was a peach, coming in the 36th minute, a curling effort that took the slightest of deflections on its way into the top corner.

Jovic saw a smart finish ruled out and then watched as Rodrygo scored almost instantly after coming on. The teenager cushioned Casemiro's crossfield pass beautifully before nipping inside Osasuna defender Lillo and banging the ball low and into the net.

Atletico's players might have been keeping tabs on their way home from Mallorca but their job was already done after Costa and Felix finally got the goals to suggest they might form a potent partnership together.

Costa's was simple, as Mallorca failed to clear Koke's cross and the striker nipped in to head past goalkeeper Manolo Reina.

Felix's was more complex but owed something to fortune too. The Portuguese did brilliantly to bring a looping ball down but his finish on the turn took a cruel deflection before spinning up and into the far corner.

Morata's moments of madness, that included two bookings in as many minutes after an argument with Mallorca's Xisco Campos, should mean Costa and Felix reunite this weekend.