Eoin Morgan plays captain's knock to keep KKR in hunt for a spot in IPL playoffs. Highlights of KKR vs RR here 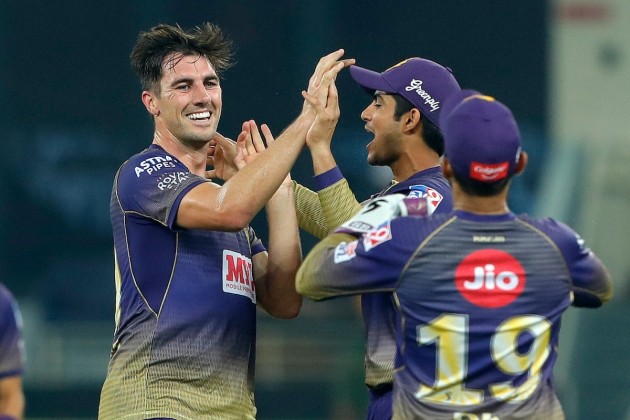 Batting first, KKR scored 191 for 7, riding on skipper Epin Morgan's unbeaten 68 off 35 balls with five fours and six sixes.
Rahul Tewatia was the best bowler with figures of 3 for 25. In reply, Royals only managed  131 for 9 with Pat Cummins grabbing 4 for 34 in four overs.

11:13 PM IST:  KKR complete a 60 run win, RR are gutted they can go last on th epoints table because the loss will drop there net run rate; They came in with a chance to reach top four and have ended up going last or second last depending on NRR. KKR will need to wait and hope for others results are in their favour

10:58 PM IST: Narine into the attack; RR want to play full 20 overs Gopal reverse sweeps Narine for a FOUR!!! over point;  Gopal finishes the over with a FOUR!! reverse sweep again. He will have his say

10:54 PM IST: Mavi into the attack now surely KKR can dream of a big win which will get them to playoffs

10:25 PM IST:  Chkravarthy Strikes Removes Buttler 35 (22b) RR are reeling and its Cummins in outfield who takes the catch. Butter looking for a big shot find Cummins who settles in to complete an eays catch

10:22 PM IST: Nagarkoti into the attack Buttler lofts youn bowler for a FOUR!!!! just makes room clears his arm and hits through mid-off.

10:15 PM IST: Sunil Narine gets into attack; Buttler carts a SIX!!! RR need more of this but KKR need to win big if they want to upstage RCB-DC or SRH; 10 runs of the over

10:12 PM IST: Nagarkoti into the attack; Buttler gets a FOUR but bowler almost gets Tewatia, who slashes the ball but lands in no man land; Tewatia gets room outside off Hits a FOUR!!! through covers;

10:05 PM IST:  Sunil Narine into the attack as RR try and look to rebuild the innings and make a match out of it. 4 runs of the over

10:03 PM IST:   Varun Chkravarthy into the attack RR are 41/5 (6) powerplay gone; Royals have lost half their side; What a turn of events for KKR; it started with Morgan getting 68 (35b) and Cummins have been superb with 4 wicket haul still has an over to go. Knocked wind out of RR sails

9:45 PM IST:  Smith now takes over, guides a ball on leg stump, hits a FOUR!!!!  But hang on Smith has been bowled by Cummins. Inside edge outside off, Smith tries to smash but inside edge dislodges the stumps

9:39 PM IST:  Shivam Mavi to bowl 2nd over good over. Ben Stokes almost chips one back to Mavi but safe, Stokes takes 2 runs of the next ball almost gets runs out; everything happening here; Cracks a FOUR!!!! of the 5th. Stokes is pulling away as much as KKR want to hold and restrict him. 8 runs of the over KKR 27/1 Stokes 18, Smith 0

9:31 PM IST:  Cummins first ball goes for a SIX!!!! Uthappa Stokes then laps up a FOUR !!! and a SIX!!! ramped up to over fine leg; 19 runs given and and a WICKET!!!! KKR won't mind it. It was going to be an expensive over but Cummins gets Uthappa and pulls things back Uthappa c Nagarkoti b Cummins 6 (2b); Smith is the next man in

9:10 PM IST: Tyagi gets Cummins After not taking two singles on offer, Morgan hits a SIX of the last ball KKR 191/7 (20) Morgan 68 (35b), Nagarkoti 1; Morgan has led the team to a good score, let's see how much dew effects the conditions

RR will require a serious batting effort to achieve this.

8:56 PM IST:  Archer to Cummins who managed Looks like RR are going to bowl out Archer; They need wickets and RR can't see total swell more. Already Russell cameo has given KKR some momentum and Morgan is looking in fine touch. 6 runs of the over Archer figues 4-0-19-1

8:45 PM IST: Archer comes in for a bit of damage control; Russell now gets going

FOUR!!! was an edge that rushed to boundary; SIX!!!! Pulls short ball over square leg; KKR are down but not out; 11 runs of the over and most imp for KKR Russell seems to be firing again. They need him tonight

8:41 PM IST: Gopal has given a few lose balls and Morgan has been quick to pounce

8:29 PM IST: WICKET!!!!  Gopal gets Tripathi KKR 94/4; Its a big wicket for RR Tripathi was playing well. Tries to hit six but Uthappa runs and covers ground quickly to complete a good catch at long-on

8:24 PM IST: Tewatia into the attack and his twin strikes has his skipper Steve Smith breathing easy; RR are back in the match. Tewatia is now bowling well to the field. 4 runs of the over

8:17 PM IST: Taygi into the attack, Morgan gets a SIX!!! of the 4th ball; KKR are now trying to rebuild and RR will need some kind of pressure to negate the quick start provided by Gill and Tripathi

8:06 PM IST: Tyagi into the attack and RR need some quiet good overs. Gets good carry to the keeper has managed to keep both the batsman quiet for six balls; 4 runs of the over

8:02 PM IST: Tewatia into the attack, and KKR acceleration is not stopping Tripathi after dealing in singles; launches the spinner for a SIX!!!!!!!! over Long-on

7:57 PM IST: Aaron into the attack Tripathi looking in fine touch and knocks a FOUR!!! of the 2nd ball through point and cover region. A wicket in first over haven't dented KKRs pace; they are scoring freely. Gill hits a FOUR!!! of the last ball Aaron ends up giving 12 runs of the over; RR are failing to create any pressure barring Archer but he has just 4 overs in his quota

7:50 PM IST: Stokes into the attack, Tripathi gets a SIX!!!! over backward square leg; KKR are getting momentum 11 runs of the over

7:45 PM IST: Spinner Shreyas Gopal to bowl the 4th. Gill and Tripathi attack and help themselves to three boundaries. Gill pulls one through midwicket, Tripathi follows it with FOUR!!! through square leg and midwicket

7:30 PM IST: Shubman Gill to start for KKR along with Nitish Rana, Archer for RR