The IPL 2021, to be held in six venues, will start with a mouth-watering clash between Mumbai Indians and Royals Challengers Bangalore. Here's everything you need to know

Ending the uncertainty around the 2021 edition of the Indian Premier League (IPL), the BCCI on Sunday announced the schedule of the cash-rich T20 cricket league. "After nearly two years, the IPL extravaganza will return home," the Indian cricket board said in a release. (More Cricket News)

As speculated earlier, the tournament will be held in six venues -- Ahmedabad, Bengaluru, Chennai, Delhi, Mumbai and Kolkata. Meaning, all the matches will be held in 'neutral' venues as there will be no designated home grounds.

The 2020 edition of the world's most popular cricket league was held in the United Arab Emirates due to the raging coronavirus pandemic in India.

The season will start on April 9 in Chennai with a high octane clash between Rohit Sharma's defending champions Mumbai Indians and Virat Kohli's Royal Challengers Bangalore. "The World’s Largest Cricket Stadium - Narendra Modi Stadium in Ahmedabad will host the Playoffs as well as the final on 30th May, 2021 which promises to be a visual spectacle," added the release.

As reported earlier, the tournament starts after the end of ongoing India vs England series. The Test leg completed on Saturday, with India winning the fourth and final match by an innings and 25 runs for 3-1 victory, and Kohli &b Co have qualified for the ICC World Test Championship final.

The two teams will now face off in a five-match T20I series, starting Friday (March 12). All the matches will be played at Narendra Modi Stadium, where the final two Test matches were played.

The ODI leg, comprising three matches, will be played in Pune. It starts on March 23.

The IPL Governing Council also said that fixtures "have been mapped in a way that every team will travel only three times during the league stage, thus reducing commute and minimising risk."

There will be many firsts this season. And following is what we know so far:

And most importantly, what about in-stadia attendance for fans?

To begin with, it will be played behind closed doors. But a call on allowing spectators will be taken at a later stage of the tournament.

With that's here's a look at the fixtures: 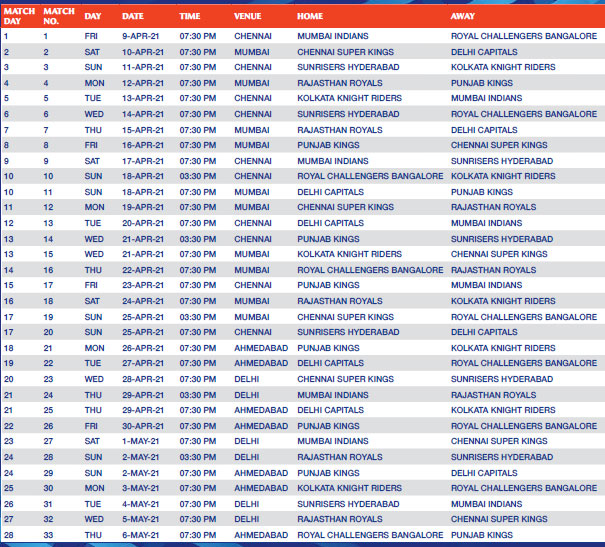 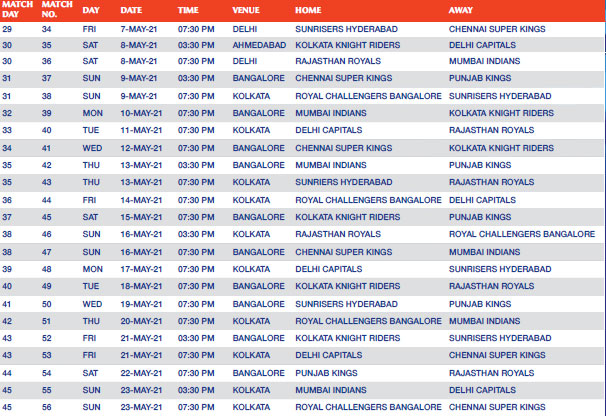