Kings XI Punjab lost the plot in their chase of SunRisers Hyderabad's 201/6, and the respective captains - KL Rahul and David Warner - have their reactions after the IPL match 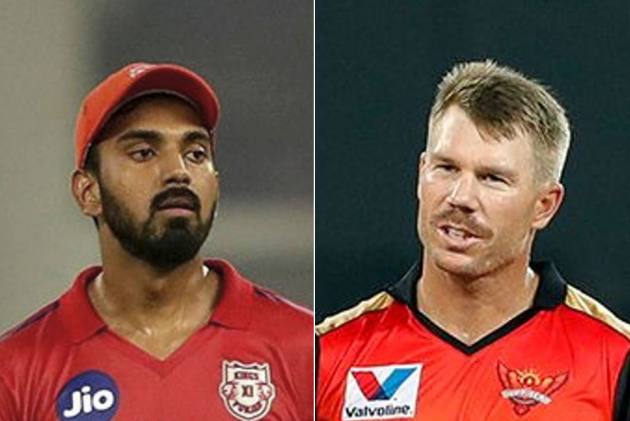 Struggling Kings XI Punjab captain KL Rahul on Thursday rued the early run-out of Mayank Agarwal, saying it was a disaster for his side in their pursuit of a stiff 202-run target against SunRisers Hyderabad in an IPL match in Dubai.

KXIP were all out for 132 in 16.5 overs to slump to a 69-run loss, their fifth defeat -- and fourth on the trot -- in six matches to remain at the bottom of the IPL points table.

KXIP made a disastrous start to their run chase as they lost two wickets inside five overs. In-form Agarwal (9) was run out in a horrible mix-up with Rahul (11) in the second over itself, while Prabhsimran Singh looked promising for a while but got out for 11.

"When we lose wickets in the power-play, it's gonna be tough, especially when we're playing only six batters. Getting Mayank run-out wasn't the ideal start, it was a disaster," a disappointed Rahul said in the post-match presentation.

"It was also one of those days when everything we hit in the air went to the fielders."

KXIP made amends of their woeful death overs bowling by conceding just 41 runs in the last five overs and taking six wickets in the process with leg-spinner Ravi Bishnoi (3/29) triggering a batting collapse of SRH.

And Rahul was full of praise for his bowlers, saying: "The last five games we struggled with our death bowling, but that was a positive today. The boys showed courage and pulled things back, you expect them to score 230-plus after that start."

The KXIP skipper also lauded Nicholas Pooran (77 off 37 balls) for his lone effort with the bat and young Bishnoi's bowling display.

"Pooran is just so good to watch and he's batting really well. Did the same thing every time he got a chance last year as well. One more thing for us to stay positive about, we know that Nicky will come good.

"Bishnoi has shown a lot of heart, he's not been afraid whether it's the powerplay or at the back end. He's enjoyed those occasions. All our players are professionals and they understand their problems, as a captain you just put an arm around the shoulder. Everybody in this squad is talented. Sometimes it doesn't come off and you've got to be patient with them," he said.

Winning captain David Warner, who made 52 off 40 balls and shared a 160-run opening stand with Jonny Bairstow (97), admitted that he was little nervous when Pooran was going all guns blazing in the middle at one stage.

"Enjoyed it, but was a little nervous when Nicholas was hitting them out with four overs to get in. I played with him in Bangladesh and when he's hitting it clean, you always think hard," he said.

He praised Rashid Khan for his impressive 3/12 spell.

"Rashid obviously gets shown a lot of respect, he's a world class bowler and it's nice to have him. Obviously it's disappointing and sad for Bhuvi but having him (Rashid) out gives others opportunities and we did okay," he said.