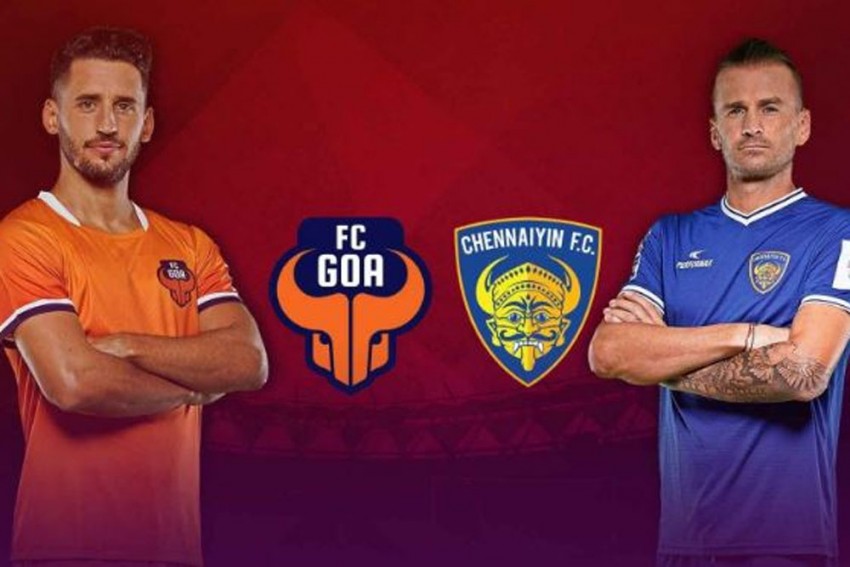 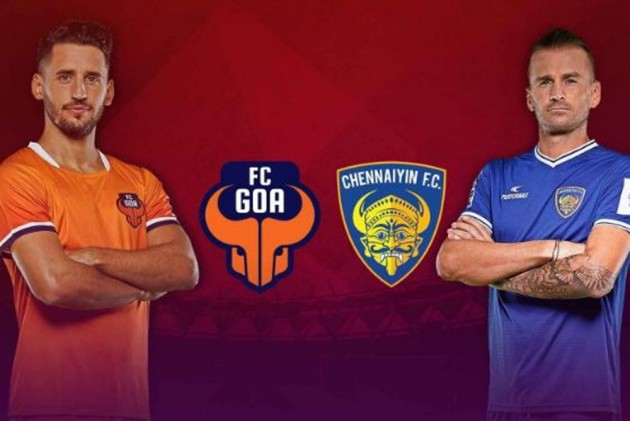 We have the first glimpse of FC Goa's hunger for their maiden Indian Super League (ISL) as the last season's runners-up produced a clinical performance to thrash two-time champions Chennaiyin FC in their match on Wednesday. Seiminlen Doungel (30'), Ferran Corominas (62') and Carlos Pena (81') scored for the winners. There were a couple of good chances for the visitors, but have been found wanting in all aspects of the game. (Football News)

Get highlights of FC Goa vs Chennaiyin FC match here.

90+4' - Goa defender Seriton Fernandes is the man of the match. One final move from Goa from the left flank. Poor minus, and Chennaiyin win another corner. Looking for a consolation goal. Lallianzuala Chhangte's delivery and a shout for a handball, but nothing coming. Match over. Big win for the favourites.

90+1' - Corner for Chennaiyin, then a throw-in as the rain buckets down. And very poor move from the visitors, pretty much sums up their poor day. And another sub for the hosts. Saviour Gama on for Manvir Singh. Three minutes added.

89' - Clearance from Goa and it's raining. Another change for Goa. Liston Colaco on for Seiminlen Doungel.

87' - A rare loose ball from Goa. Corner for Chennaiyin. Meanwhile, change for Goa. 20-year-old Princeton Rebello coming on for Jackichand Telem. Two attempts, both headers, from the corner play. Scrambled, but no averted.

84' - Lallianzuala Chhangte gets a free run on the left flank, but his release fails to impress. And soon, Goa on the offensive again.

80' - Goal! Carlos Pena makes it three for Goa. First goal for the Spaniard. Poor marking, but a brilliant delivery from Brandon Fernandes. Easy. Moments ago, Lucian Goian
got a yellow for 'handling' Coro.

79' - Comfortable for Goa. Little too easy for the hosts. But threats are still there. Meanwhile, third change for Chennaiyin. Nerijus Valskis in for Masih Saighani.

76' - Confusion between Vishal Kaith and Lucian Goian as Len Doungel tries to find his second.

75' - Cheeky play from Ferran Corominas to sets up Jackichand Telem. But the Manipuri rushes in and slashes it, missing the target. Poor technic.

69' - Second substitute for Chennaiyin. Dragos out, Rafael Crivellaro in.

62' - Goal! Ferran Corominas, playing in a number 10 role, slots home. A poacher's goal. Easy. Great first touch after a delectable minus from Jackichand Telem. then guides gently into the empty net. Big hole in the Chennaiyin backline.

61' - Good reading from Chennaiyin defender Eli Sabia to win the ball back from Len Doungel. Courtesy that, the visitors get a move and win a corner. Some frantic defending from the hosts.

59' - Goa are relentless now. Go for a couple of long rangers. Jackichand Telem, after going past two Chennaiyin defenders, gets into contact with one. Just a free-kick though.

56' - Ferran Corominas and Len Doungel once again showing their brilliant understanding. The Spaniard releases a pinpoint through ball for the Indian, who the minuses one. But it just misses the intended target. On the counter, Lallianzuala Chhangte tried a curler, which misses the far upright.

52' - Solid kick from Lallianzuala Chhangte on Ferran Corominas near the left top edge of the Chennaiyin box. Chhangte, then, gets himself on with a good run. Win a corner after Seriton Fernandes beats him to the ball. Poor ball from Thoi to end the exchange.

49' - This is lively from the visitors. Win another free-kick inside the Goan half. But a wasteful long ball, to Mohammad Nawaz. India head coach Igor Stimac is watching the proceedings.

46' - Chennaiyin get an early free-kick inside the Goan half. As usual, pragmatic approach from the visitors. Rolling back and starting the move from the backline.

Change at half-time for Chennaiyin. Anirudh Thapa in, Dhanapal Ganesh out.

45+1' - It's becoming a one-sided encounter. Four chances for Goa and two for Chennaiyin, including that contentious penalty shout. A rare chance for the visitors. Corner as Thoi's attempt was headed away by a defender. And with that one added minute is over. First half over.

43' - And Ferran Corominas gets his chance to test Vishal Kaith for the second time. A diving save from the Chennaiyin goalie.

40' - A very good delivery from a free-kick, but Goa goalie, Mohammad Nawaz up to the task, raising tall and punching the threat away. Thoi Khangebam, from the following play, gets a good look at the goal. But off-side.

38' - Nice tussle between Jackichand Telem and Jerry Lalrinzuala, again, just outside the Chennaiyin box.  Jackichand then gets himself a good chance to shoot and he shoots, but it was blocked. Lots of sliding from Chennaiyin defenders.

35' - FC Goa in control now. Taking time on the ball, waiting for runs, and Brandon Fernandes has been brilliant so far.

30' - GOAL! Chennaiyin win a free-kick near the centre-line. But they decided to roll back the ball and start afresh. This clash is between the strongest attack and weakest defence from the last season, and FC Goa get the first goal. Courtesy a scrambled goal with Seminlen Doungel getting his name on the scorecard. Goal for the new team on debut.

27' - Brandon Fernandes releases a good ball for Manvir but Edwin Vanspaul is alert.

25' - Jerry Lalrinzuala commits a foul to concede a free-kick to Goa in a dangerous position. Nothing came off it. Chennaiyin, from the following play, get a brilliant chance. But attempt from India international Lallianzuala Chhangte was lame. Easy for Mohammad Nawaz.

21' - It looks like sneaking in. Chennaiyin get a corner after a swift counter. Eli Sabia almost did it.

20' - Len Doungel is making life difficult for Chennaiyin defenders. From a brilliant through ball from Ferran Corominas, the local lad almost beat the onrushing Vishal Kaith. Then Doungel sets up Mandar Rao Dessai. The latter forces a brilliant save from Kaith.

17' - Unmarked Thoi Khangebam fails to make the connection from a brilliant throw-in from the left. What a chance.

15' - First yellow card of the match to Goa defender Lenny Rodrigues, for bringing down Jerry Lalrinzuala on the left flank.

13' - Having survived the crisis, Goa once again started enjoying possession in the middle.

11' - Officials, what have done. It was a stone-wall penalty for Chennaiyin. The visitors, against the run of the play, breached the high Goa defensive line but Dragos was tripped, with the very lucky Goa defender showing the studs.

10' - This is all Goa in the first ten minutes, with most of the moves coming from the right flank.

7' - A rare foray into the Goa final third by Chennaiyin. But no threat in that. Good recovery for the hosts and a quick counter.

3' - Early action from Mourtada Fall and Manvir as Goa FC made early grounds in this traditionally high-scoring clash.

2' - Sluggish start to the match. Already a couple of warnings from the ref.

6:30 PM IST: Chennaiyin FC, two-time champions, will have to salvage pride in this year's ISL. They finished bottom of the table last ISL season and finished second best to FC Goa in the Super Cup earlier this year. The team has undergone a lot of changes and coach John Gregory will count on his new-look forward line to deliver. With Jeje Lalpekhlua nursing an injury, new signing Lallianzuala Chhangte, Dragos Firtulescu and Nerijus Valskis have to wear their scoring boots.

FC Goa will certainly ride their home support. Lobera has the advantage of fielding a team, the core of which is a carry forward of last year's roster. Goa should do well up front what with the league's all-time top goal scorer Ferran Corominas, Edu Bedia, Jackichand Singh, Hugo Boumous, Brandon Fernandes and now new signing Seiminlen Doungel in their ranks. Goa also have a strong defence.

On paper, Goa look more balanced and stronger but Chennaiyin can't be taken for granted.