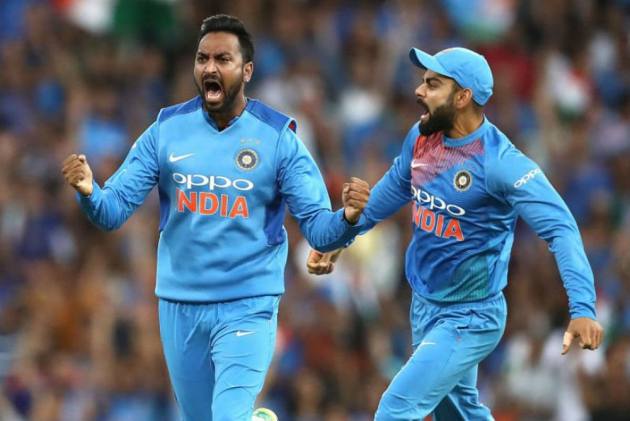 India beat West Indies in a rain-affected second game of the three-match T20 series at the Central Broward Stadium in Florida on Sunday (August 4). Rohit Sharma hit 67 off 51 balls, with three sixes and six boundaries, to help India to 167/5 after captain Virat Kohli chose to bat first. Despite Rovman Powell's half-century, West Indies were kept in check at 98/4 off 15.3 overs when the inclement weather intervened. Rain prevented any further play and India were declared winners by 22 runs on the DLS method as the hosts needed to be at 121 when play was halted. Get highlights of India vs West Indies, 2nd T20 here (SCORECARD | ASHES HIGHLIGHTS | CRICKET NEWS)

Virat Kohli: "Had a really clinical game again. As we spoke in the morning, pitch was going to be good to bat on early on. New ball was coming on nicely. We set up a good foundation. Good finish from Jadeja and Krunal to get us past 160. The way we were going, could have got to 180, but pitch slowed down considerably in latter half. Winning is always going to be priority. But sealing the series gives the chance to bring few guys in. Idea is always going to be to win first. But winning the first two games gives the cushion."

It has started raining now and it looks a bit gloomy.

Players are going off. Groundstaff have brought the covers out, but it's not raining yet. The DLS par score is 120

23:00 hrs IST: OUT! Krunal gets the better of Pooran and Powell. This puts India on top. Shimron Hetmyer and Kieron Pollard come to the crease. West Indies are 89/4 after 14 overs, need 79 off 36. Ravindra Jadeja comes into the attack.

22:33 hrs IST: SIX! Powell gets down on his knees and slog sweeps it over deep backward square for a maximum. West Indies are 57/2 after 9 overs. Powell 36*, Pooran 14*. Krunal comes into the attack.

22:19 hrs IST: FOUR! Too short from Saini, Powell gets into position early and pulls this to the fine leg boundary. Costly over from the Indian pacer, nine off it. West Indies are 25/2 after 6 overs. Pooran 9*, Powell 9*

22:14 hrs IST: FOUR! Overpitched from Khaleel, Powell drives it past the bowler for a boundary. Lot of power in that shot! West Indies are 16/2 after 5 overs. Powell 5*, Pooran 4*. Navdeep Saini comes into the attack.

22:06 hrs IST: OUT! Flighted delivery from Sundar, Narine dances down the track and looks to hit it over the leg side but misses it completely. The ball hits the middle stump. Poor shot! Rovman Powell comes to the crease. West Indies are 8/2 after 3 overs.

22:02 hrs IST: OUT! Slower ball from Bhuvi, Lewis is completely deceived by it. The India pacer takes a superb return catch. Nicholas Pooran comes to the crease. West Indies are 7/1 after 2 overs. Sundar to continue.

21:56 hrs IST: Extremely good start from Sundar. Only one off his first six deliveries. West Indies are 1/0 after the first over. Bhuvneshwar Kumar comes into the attack.

21:53 hrs IST: Time for Windies' chase. Evin Lewis and Sunil Narine are at the crease. Washington Sundar to open the attack.

21:35 hrs IST: OUT! Short delivery from Cottrell, Pandey gets a top-edge and it ends up in the gloves of Pooran. Magnificent over, a wicket and just six runs. Ravindra Jadeja comes to the crease. India are 147/5 after 19 overs. Paul to bowl the final six balls.

21:26 hrs IST: OUT! Yorker from Cottrell, on middle stump, Kohli looks to hit it to the on-side but misses it totally. Krunal Pandya comes to the crease. India are 135/4 after 17 overs. Paul comes back into the attack.

21:20 hrs IST: OUT! Short ball from Thomas, outside off, Pant ends up top-edging it to Pollard at the third man boundary. Another failure for the India No. 4. Manish Pandey comes to the crease. India are 130/3 after 16 overs. Cottrell comes back into the attack.

21:10 hrs IST: OUT! Slower delivery from Thomas, Rohit looks to pull but miscues and Hetmyer, at cover, goes back to complete a good catch. What an innings this for the India vice-captain! 67 off 51. Rishabh Pant comes to the crease. He went for a first-ball duck yesterday. India are 117/2 after 14 overs.

20:59 hrs IST: SIX! Flighted delivery from Pierre, Kohli steps out and pummels it straight down the ground for a maximum. India are 98/1 after 12 overs. Rohit 55*, Kohli 14*. Brathwaite comes back into the attack.

20:45 hrs IST: OUT! Dhawan looks to hit this behind square, across the line, but misses it completely. Much-needed breakthrough for the Windies. Three wickets in the series so far for Paul. Virat Kohli comes to the crease. India are 68/1 after 8 overs. Narine comes back into the attack.

20:31 hrs IST: SIX! Juicy full toss from Paul, and Rohit dispatches it over mid-wicket for a maximum. Impressive! India are 52/0 after the end of Powerplay. Rohit 36*, Dhawan 12*. Carlos Brathwaite comes into the attack.

20:24 hrs IST: FOUR! Fuller delivery from Narine, Dhawan comes down the track and smacks it past the fielder at mid-on. Shot! Moves into double-figures. India are 39/0 after 5 overs. Rohit 23*, Dhawan 12*. Keemo Paul comes into the attack.

20:21 hrs IST: FOUR! Length ball, Rohit lifts this over mid-off. Easy pickings. Another expensive over, this time from Cottrell. 13 off it. India are 34/0 after 4 overs. Rohit 22*, Dhawan 8*. First change in bowling. Sunil Narine comes into the attack.

20:16 hrs IST: FOUR! Good length delivery from Thomas, Rohit hits it over the infield to the deep mid-wicket boundary. Costly over from the Windies pacer, 12 off it. India are 21/0 after 3 overs. Rohit 11*, Dhawan 6*

20:06 hrs IST: FOUR! Short of length delivery from Thomas, down leg, Rohit hits this off his hip to the fine leg boundary. India are 6/0 after the first over. Rohit 5*, Dhawan 0*. Sheldon Cottrell comes into the attack.

19:32 hrs IST: India have won the toss and have opted to bat

19:10 hrs IST: There was a lot of rain in Florida last evening but for now, the sun is out. We should be starting on time.

Meanwhile, Steve Smith has become just the third Australia batsman to score a century in each innings of an Ashes Test on English soil after he brought up his second hundred at Edgbaston.

The former Australia captain scored a magnificent 144 in the first innings of the opening Test and led the charge for the visitors second time around on Sunday.

PROTEAS MOVE ON - Ottis Gibson will not serve as the head coach of South Africa for their forthcoming tour of India after Cricket South Africa (CSA) revealed a revamped management structure for the team which will see the board appoint new administrative staffs in charge of the Proteas. A new football style team manager will take overall charge of all aspects of the team, appointing coaching staff and captains.

18:19 hrs IST: In the first game, five India batsmen got into double-digits as compared to West Indies' two. Today's match will take place on the same pitch. Guess the team batting first would be looking for 120-130.

18:10 hrs IST: Hello and welcome to Outlook's live coverage of the second T20 between India and West Indies.

In Florida on Saturday, Shikhar Dhawan fell cheaply on his return from a thumb injury that prematurely ended his World Cup campaign and India were in trouble at 32/3 when Rohit Sharma (24) and Rishabh Pant (0) holed out off successive balls from Sunil Narine.

After being asked to bat first, Windies, the defending World T20 champions, lost both openers John Campbell and Evin Lewis for ducks.

Nicholas Pooran looked good, hitting two sixes in his 20, but he and Shimron Hetmyer then fell to consecutive Saini deliveries.

All the six Indian bowlers (Sundar, Saini, Bhuvneshwar Kumar, Ravindra Jadeja, Krunal Pandya and Khaleel Ahmed) took at least a wicket apiece as the hosts failed to get past the 100-run mark.