India, led by R Ashwin's four-wicket haul, bowled out South Africa for 275 to take a massive 326-run first innings lead on Day 3 of the second Test, in Pune on Saturday (October 12). 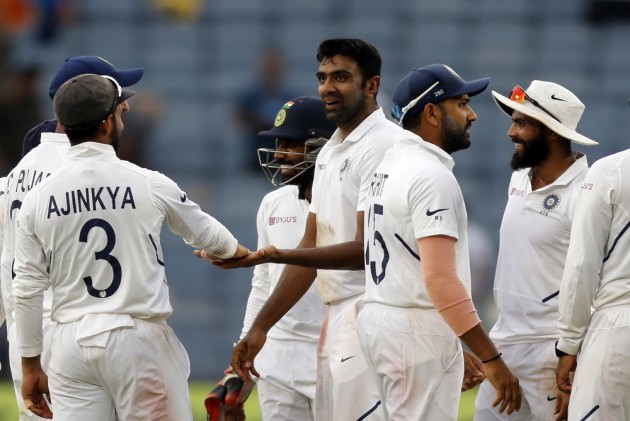 Tail-enders Keshav Maharaj and Vernon Philander set an example of gutsy batsmanship as South Africa fought hard against a quality attack but could not stop India from taking a massive 326-run lead on the third day of the second Test in Pune on Saturday (October 12). (HIGHLIGHTS | SCORECARD | CRICKET NEWS)

While a total of 275 in 105.4 overs is far from India's mammoth first innings total of 601, the 119-run ninth wicket stand between Philander (44 not out) and an injured Maharaj (72) showed what the top-order could have done had they shown some stomach for fight.

The duo ducked the bouncers, defended doggedly and attacked the loose deliveries as the Indian bowling attack suddenly lacked answers during the final session of the third day, which certainly belonged to the Proteas.

Coming together at 152 for eight, Philander-Maharaj pair not only had a century- plus stand but more importantly consumed 43.1 overs, taking away a lot of second innings overs from India.

The pitch has shown no considerable signs of wear and tear over three days but nothing can be taken away from Philander, whose, defensive technique against Ravichandran Ashwin (4/69) and Ravindra Jadeja's (1/81) tight bowling, was laudable.

After a point the two senior spinners looked a touch frustrated and Maharaj scored some useful runs against them and then against the second new ball.

It was a top notch effort from two individuals, for whom batting is not their primary skill.

Maharaj hit 12 boundaries even as he looked in pain while rubbing his shoulder. He was finally out, caught at leg slip by Rohit Sharma off Ashwin but after a satisfying day in office.

The highlights of the morning session was however Mohammed Shami's hostile first spell and an acrobatic catch from Wriddhiman Saha while the afternoon session was all about relentless pressure created by Ashwin and Jadeja.

South Africa's most experienced pair of skipper Faf du Plessis (64) and Quinton de Kock (31) tried to resurrect the innings with a quick stand of 75 runs but Ashwin removed the latter before lunch to make matters worse for the visitors.

Shami (2/44) bowled with a lot of fire, sticking to hard lengths during the session while Umesh Yadav's (3/37) third wicket of the innings primarily belongs to Saha, who once again proved why he is rated as the best in the world.

On a pitch where Indian batsmen looked at ease, it was an every moment struggle for the Proteas batsmen.

Shami was getting the semi new-ball to dart back in after pitching while Yadav was primarily bowling outswingers.

Nightwatchman Anrich Nortje (4) was uncomfortable from the start with Virat Kohli setting an attacking field that included four slips and a gully.

Shami got deliveries to rear up from the length and one such delivery was awkwardly fended by Nortje and skipper Kohli at fourth slip took a smart catch diving to his right.

Theunis de Bruyn (30) hit a couple of cover drives but it was a moment of inspiration from Saha that brought about his end.

Trying an expansive drive off Yadav, De Bruyn’s hard flash was flying towards first slip and an aerial Saha plucked out of thin air, leaving South Africa tottering at 53 for five.

However Du Plessis and De Kock batted positively, punishing the loose balls and didn't look in much trouble like the earlier batsmen.

Du Plessis had 10 hits to the fence including one maximum while De Kock hit seven boundaries.

It was Ashwin, who removed De Kock with a classical off-break that pitched on the middle and the southpaw was squared up and beaten trying to play for the turn with bails clipped.

In the post lunch session, spinners took control as Senuran Muthusamy (7) shouldered arms to delivery from Jadeja that turned back sharply and he was adjudged leg-before.