Virat Kohli's seventh double-century powered India to 601/5d against South Africa on Day 2 of the second Test in Pune on Friday. In response, the visitors were 36/3 at the close of play. Umesh Yadav took two wickets, while Mohammed Shami scalped one. Get highlights of India vs South Africa, 2nd Test, Day 2 here 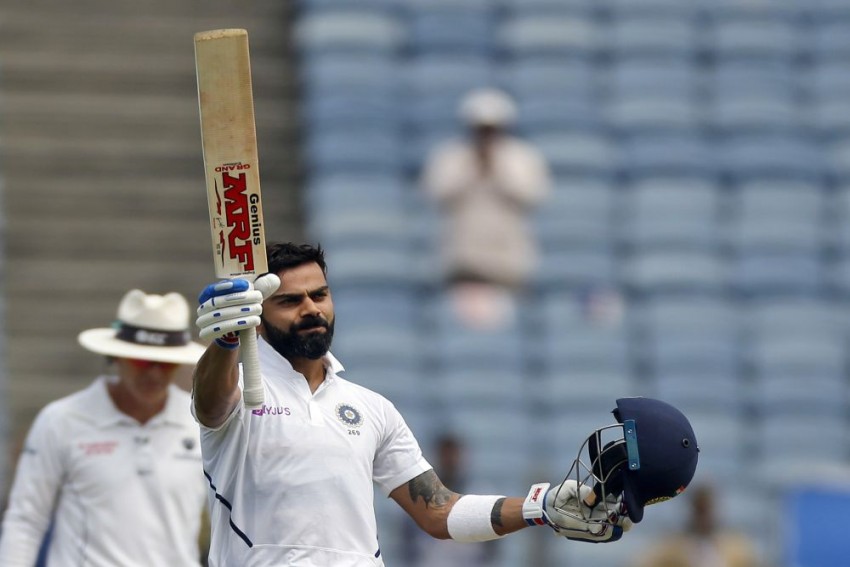 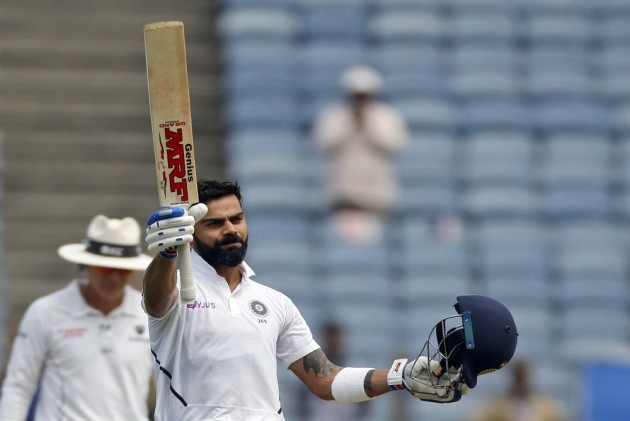 17:00 hrs IST: That's stumps. South Africa 36/3. Umesh pegged back the openers, before Shami struck off his very first ball. The visitors still trail by 565 runs. They'll need to bat out of their skins on Day 3.

16:38 hrs IST: OUT! Big appeal for caught behind and not given. Kohli decides to review. Back of a length delivery from Shami, moving away, and UltraEdge confirms an outside edge. So Shami has struck first ball. Anrich Nortje comes to the crease. South Africa are 33/3

16:13 hrs IST: OUT! Short of length delivery from Umesh, Elgar decides to leave it, but is too late to withdraw his bat. The ball takes the inside edge, deflects onto the back of his boot before hitting the stumps. Elgar is disappointed. South Africa are 14/2. Temba Bavuma comes to the crease.

16:02 hrs IST: OUT! Full from Umesh, gets it swing into Markram, who attempts to push but ends up playing down the wrong line. Gets hit on the front leg. Would have gone onto hit the leg-stump. The Indian strikes with his second ball in his comeback game! Theunis de Bruyn comes to the crease. South Africa are 4/1.

15:55 hrs IST: Extremely good start from Ishant. South Africa are 2/0 after the first over. Umesh Yadav comes into the attack.

15:51 hrs IST: Welcome back! Dean Elgar and Aiden Markram are at the crease. Ishant Sharma to open the attack.

15:41 hrs IST: OUT! Jadeja departs for 91. Goes for the big shot but fails to reach the pitch of the ball, and ends up miscuing it. Theunis de Bruyn takes an easy catch at long-off. First wicket of the game for Muthusamy. And Kohli is also walking off, so India have declared (601/5). This is the 10th time India have scored 600-plus under Kohli's captaincy.

14:58 hrs IST: Length ball from Markram, outside off stump, Jadeja makes room and hits it in front of square for a double. Completes his half-century and does his sword celebration. India are 519/4. Kohli 211*

14:41 hrs IST: Full from Muthusamy, outside leg stump, Kohli clipped fine past square leg for two runs and that's his seventh Test double ton. Also, he reaches the landmark of 7,000 Test runs. What a player! Make it a triple-century now! South Africa is the sixth opposition against whom Kohli has scored a 200. India are 483/4. Jadeja 29*

14:31 hrs IST: Welcome back for the final session. Kohli on strike. Muthusamy to bowl for SA.

13:54 hrs IST: FOUR! Too short from Maharaj, Kohli makes space by going deep in his crease, rocks back to pull this to the deep midwicket boundary. Poor over from the South African, nine off it. India are 462/4. Kohli 189*, Jadeja 19*

Meanwhile, former India captain Shantha Rangaswamy, who is set to be a part of the powerful nine-member BCCI apex council, says she never imagined that any woman cricketer will "storm the male bastion" that the Indian cricket board is. Rangaswamy is set to get elected unopposed in the Indian Cricketers' Association (ICA) elections and will be its female representative on the BCCI apex council.  "Never ever in my dreams I imagined I would be sitting on the board. I did not even imagine a male cricketer on the board, let alone us. Some may be cursing the Lodha reforms but it is only because of that, we finally have a voice in the board. It is like storming a male bastion," 65-year-old Rangaswamy said.

13:11 hrs IST: Time for drinks. Another wonderful session for India (415/4), barring the wicket of Ajinkya Rahane. Kohli is unbeaten on 159. The home team has scored 59 in the last one hour. Looking set for at least 520.

12:59 hrs IST: FOUR! Another fuller delivery from Rabada, just outside off stump, and Kohli hits it through the covers for a boundary. Beauty! 400 up for India. Kohli 143*, Jadeja 4*

12:31 hrs IST: OUT! Maharaj becomes the fifth South Africa spinner to complete 100 Test wickets after Nicky Boje, Paul Adams, Paul Harris and Hugh Tayfield. Rahane departs for 59(168). Turns away from a perfect length, drawing Rahane into the defence, beats him on the outside edge, and De Kock does the rest. Ravindra Jadeja comes to the crease. India are 380/4

Roger Federer was pushed to the limit by David Goffin as the World No. 3 battled through to the quarter-finals of the Shanghai Masters. Backed by vociferous support from the crowd, Federer was firmly tested by Goffin but the 38-year-old eventually came out on top. READ HERE

12:20 hrs IST: FOUR! Full from Rabada, on middle stump, Kohli leans forward and drives straight past the bowler for a boundary! Classy! Can't get any better. Expensive over from the South African, eight off it. India are 367/3. Kohli 115*, Rahane 58*

12:11 hrs IST: We're back live for the post-lunch session. Kohli on strike. Muthusamy will start for the Proteas.

Meanwhile, Cricket Australia unveiled a "game-changing" parental leave scheme Thursday (October 10) designed to let players in its history-making women's team remain in the game while raising a family. The policy includes 12 months' paid parental leave for players who give birth and a guaranteed contract extension for the following season so they know they can return to the sport. Cricket Australia said it had been working on the policy with players and the Australian Cricketers Association for three years.

11:30 hrs IST: That's lunch. India 356/3. Kohli 104*, Rahane 58*. Another session completely dominated by the hosts. They are looking at yet another 500+ score. A fine knock from Kohli, a half-century for Rahane and the partnership currently stands at 158, the highest fourth wicket stand for India against South Africa. We'll be back in about 35 minutes. Stay tuned!

11:16 hrs IST: FOUR! Half volley from Philander, on leg stump, and Kohli punches it straight down the ground. What a way to get to his first Test century of 2019 and 26th overall! Magnificent! Gets a healthy round of applause. India are 345/3. Rahane 50*

11:05 hrs IST: Back of a length ball from Nortje, outside off, Rahane works it through midwicket for a quick single and completes his half-century. Brilliant innings! He has been patient. Needs to convert this into a big one now. India are 339/3. Kohli 95*

Jose Mourinho rejected the chance to hold talks with Lyon regarding their vacant head coach position because he has "already chosen another" team, according to the Ligue 1 club's president Jean-Michel Aulas. Mourinho has been out of work since December last year, when he was sacked by Manchester United following a run of poor results. READ HERE

10:23 hrs IST: FOUR! Fuller delivery from Rabada, on leg stump, and Rahane comfortably flicks off his pads through square leg umpire for a boundary. Costly over from the South African, 10 off it. India are 308/3. Kohli 84*, Rahane 30*

09:48 hrs IST: EDGED AND FOUR! Good length delivery from Philander, gets some away movement, Kohli pokes and gets the outside edge, but the ball travels through the gap between the keeper and first slip to run away to the third man boundary. Lucky! India are 280/3. Kohli 69*, Rahane 18*

09:30 hrs IST: Rahane and Kohli are out in the middle. Two slips and a gully in place for the India vice-captain. Here's Rabada

09:06 hrs IST: Agarwal - "Very happy that I could get back-to-back hundreds, that's a good feeling. The team is in a good position, winning the toss, batting first and with one batsman short, it's a good thing to make runs. There were periods when runs weren't coming easily, they bowled good spells, tight spells and didn't let us score. Plenty of long distance running, meditation and working on my game (on his approach towards batting), some of the things I could so, some I couldn't, it was always about mental discipline. There was some moisture on the wicket, Philander and Rabada bowled tight lines, we knew we would get beaten, needed to play tight, play the straight lines and wait for the bad balls. 450-500 should be a good score to put pressure on South Africa."

Mayank Agarwal continued his fine form as his century helped India take a commanding position. Agarwal - who amassed 215 in the first innings of the first Test as India claimed a resounding win - hit 108 from 195 deliveries. He was ably supported by Cheteshwar Pujara (58) and India captain Virat Kohli (63 not out), as the hosts reached stumps on 273-3.

There was one bright spot for South Africa, with Kagiso Rabada taking all three of their wickets, although the paceman will need support if Faf du Plessis' side are to prevent India posting a huge total.

08:45 hrs IST: Hello and welcome to Outlook's live coverage of the second day's play of the Pune Test between India and South Africa.

Sandesh Jhingan Out! Massive Blow To India Ahead Of FIFA World Cup Qualifier vs Bangladesh